This racist graffiti leaves a hateful impression—even if it's removed

Indigenous rock art can be found on thousands of cliffs and rock faces. Vandalism of these traditional paintings is so common that a handful of North American archaeologists specialize in removing graffiti from them. 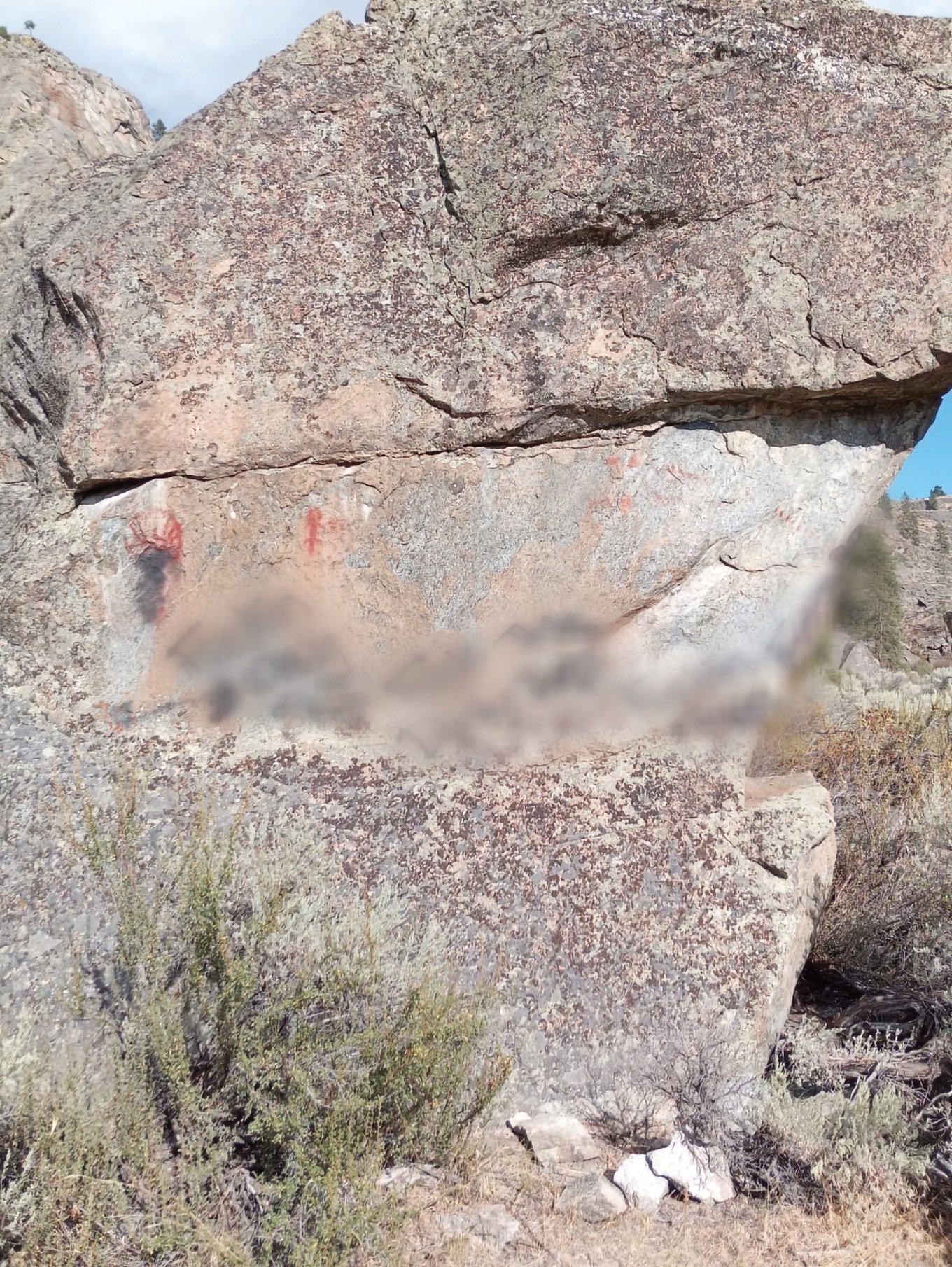 The pictographs at Osoyoos Lake were vandalized with racist slurs (which we have obscured, above) (Courtesy of Nathan McGinnis)

Osoyoos Lake lacked its usual sparkle on a recent overcast Saturday as a couple of First Nations hunters drove a rugged, hillside road in search of deer. The scenery was familiar: beyond the southern B.C. scrub and sagebrush, the men could see their reserve’s Nk’Mip vineyards; about 30 m off their path, a rock that their ancestors had marked with red ochre pictographs jutted from the desert soil. But one hunter noticed, with dismay, black marks on the rock face that, on closer inspection, proved to be spray paint defacing the art with vile racist epithets. “F–k this dirty rez” was one of the milder messages.

Indigenous rock art, from centuries or even millennia ago, can be found on thousands of cliffs and rock faces across Canada, including throughout the traditional Syilx (or Okanagan) territory in the B.C. Interior. The result of ignorance or ill will—often a mixture of both—vandalism of these traditional paintings is so common that a handful of North American archaeologists specialize in removing graffiti from them. Observers regard any scrawlings over traditional markings as implicitly racist, as many of the sites are considered sacred. But the Osoyoos case marked a departure from the crudely sprayed happy faces, hearts and Mickey Mouse cartoons Canadians have painted over ancient rock art in the past. What the B.C. band members found was a set of explicitly racist slurs, and one of the ochre images entirely obscured by paint.

“Those are [from] our ancestors,” says Jane Stelkia, a 90-year-old Osoyoos Elder, of the pictographs. “These people just don’t really care; they just go and damage.” She’s quite familiar with the ochre painting, the sacred history and story the rock conveys with a now-defaced human figure with a halo and other images—they go back thousands of years, she says. But Stelkia prefers not to share its meaning with outsiders.

The RCMP are investigating, and fines for desecrating such archaeologically significant sites in British Columbia can run as high as $1 million. But Chief Clarence Louie of the Osoyoos Indian Band doubts they’ll track down the “scumbags” who ventured onto a remote stretch of the 12,950-hectare reserve to deface the art. The band prohibits trespassing motorists, and has lately become more strict with those who illegally rip up its back roads or come ashore on its lakeside beaches, the chief says. “Maybe somebody got kicked off, and then they got pissed off,” the chief muses. Yet the business-savvy First Nation is known for welcoming tourists—its Nk’Mip Desert Cultural Centre has a display that outlines the history of Osoyoos pictographs, and the band-owned winery venerates rock designs on its labels. But the band doesn’t share with others the locations of its few art sites—other than bringing nearby public school groups to learn about them. To know the location of the site they defaced, says Louie, the vandals would have had to have trespassed before.

The graffiti was discovered on Aug. 29, the same day that a statue of Sir John A. Macdonald in Montreal was toppled by a coalition of Black and Indigenous activists protesting the role of Canada’s first prime minister in orchestrating the residential school system. The act against the 125-year-old bronze drew criticism from government leaders at all levels, but the wanton destruction of much older artwork on Osoyoos land prompted far less public outcry. Some of the region’s First Nations leaders, though, began worrying about similar defacement of their own treasured sites and considered steps to safeguard them.

Four provinces away, Isaac Murdoch, an artist from Serpent River Nation along Lake Huron, recalls canoeing on a small lake in northern Ontario during his childhood. Elders showed him ochre pictographs, telling him about the knowledge that the original artists received from the rocks, and how the site became a place of ritual fasting. Twenty years on, he returned to find many of those pictographs covered with smiley faces and black spray paint, and a Canadian flag painted atop the cliff face, looming over his people’s sacred images. It brought him to tears. As with the ugliness perpetrated in Osoyoos, he believes the vandalism reflects an urge to take away Indigenous land and special places: “The only reason you degrade something and deface people’s sacred sites and make them feel like they’re less than you is, obviously, you want something they have.” When Murdoch publicly proposed that the pictograph sites, which are located within a provincial park, be placed under First Nations jurisdiction, he received death threats.

Back in B.C., Chief Louie says the band is considering erecting a fence around the defaced rock, perhaps topped with razor wire, with a gate to let in schoolchildren and band members for closer looks. Very few Indigenous art sites are blocked thus—a prominent Western exception being Writing-on-Stone Provincial Park in Alberta, where fences and security controls protect some of the intricate petroglyphs (rock etchings) that earned the park UNESCO World Heritage status.

Jannie Loubser, an archaeologist based in Georgia, has done graffiti removal work in Writing-on-Stone, and Osoyoos band leaders have asked his advice on restoring their site. He figures some dry brushing or sensitive wet treatments might be used to remove the spray paint right up to the edges of the pictographs themselves. But Loubser recommends leaving the graffiti paint that sits on top of the red ochre itself, as it will eventually weather away to reveal the traditional markings. Still, in his decades of restoring rock art and repairing vandalism repair across North America , Loubser cannot recall seeing such overtly hateful messages on a revered site. That scar may be harder to remove than the one crudely applied in black.

This article appears in print in the November 2020 issue of Maclean’s magazine with the headline, “Marred by hatred.” Subscribe to the monthly print magazine here.