Dr. Kim Rossmo, the Canadian who said that the Pickton murders were the work of a serial killer, helped narrow down Banksy's identity 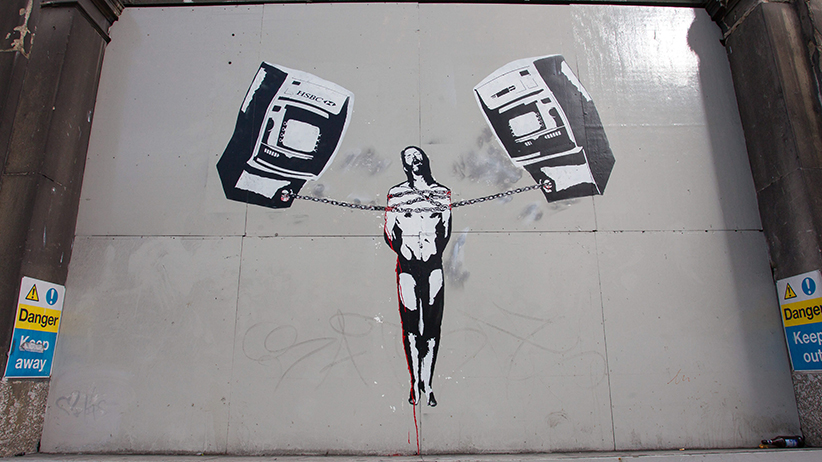 In 2008, the Daily Mail ran a story stating that they may have uncovered the identity of renowned guerrilla street artist Banksy: a Bristol man named Robin Gunningham. Now, a study headed by Canadian researcher Dr. Kim Rossmo, published in the Journal of Spatial Science, suggests it might have been right. Rossmo and three other researchers used a method called geographic profiling to “investigate a modern art mystery.”

The Saskatoon-born Rossmo has known the headlines before. While working for the Vancouver police in 1998, he wrote a draft press release warning the public that a serial killer might be on the loose in the city’s Downtown Eastside. Rossmo’s bosses at the police department refused to publish it. But he was eventually vindicated when the police arrested pig farmer Robert Pickton months later for the deaths of at least 26 women.

Rossmo is now at the Texas State University Center for Geospatial Intelligence and Investigation. Maclean’s chatted with him to discuss the implications of these new findings, and what they might mean for the future of crime and terrorism investigations.

Q: So I think start off with: In short, how does geographic profiling work?

A: What geographic profiling does is it takes a look at the locations of a connected series of incidents—say murders in a serial murder case or robberies in a serial bank robber case—and it spatially analyzes the point pattern of incidents, and creates a probability surface from those, working from the basis of an algorithm that says people offend close to where they live, but not too close. It generates probability certitudes for each crime site and then combines all the different probability surfaces for all the crime sites, and in the end, you’re left with something that’s displayed through usually a colour mapping system and then focusing on where the offender most likely is.

Q: But you can trace diseases as well?

A: We’ve done work looking at trying to identify where mosquitos breed that carry malaria, or contaminated water sources for outbreaks of cholera. And given the current concern with the Zika virus and West Nile virus, we’re hoping to do further research in that area.

Q: So what was it about Banksy? Was it to prove a point?

A: We’ve been doing a line of research into analyzing minor terrorism-related incidents to help determine where a terrorist cell might be operating. So, in some places—particularly in Asia and Europe—you often see anti-government graffiti, seditious slogans, banners, leaflets, in certain neighbourhoods. The idea is that rather than wait for an explosion to occur from a bomb, it would be useful to gather intelligence on the location of these incidents. Then, use that to help weed through the morass of information—the hundreds or thousands of tips and suspects that intelligence agencies and law enforcement deal with when they’re involved in counterterrorism.

We earlier did a study looking at data that was collected by the Gestapo during the Second World War on a couple called the Hampels [who] were leaving postcards across Berlin saying ‘Don’t trust Hitler’ or ‘Don’t trust Goebbels’. [The Gestapo] collected over 100 of these and recorded all the addresses. We ran that data to see how accurately it predicted where the Hampels lived … and it was very accurate. We wanted to see how it would work with graffiti of someone on whom we were actually able to get data. I think there are 192 Banksy graffiti sites that were originally identified, but we could only use 140 of them because that was the number we were able to accurately get locations of.

Some of the news outlets have said we ‘outed’ Banksy, which is not true because Robin Gunningham was … just the suspect that was identified by the Daily Mail. We thought we would look at other suspects, but it turns out there really aren’t any other viable Banksy suspects. So, we thought we would just see how good of one he actually is … and he was a good match. We don’t know that he’s Banksy, but he’s a better suspect as a result of this analysis than he was before.

We haven’t proved that Gunningham is Banksy. We’ve just added evidence to that theory. Also, some reports have sort of confused what we were talking about regarding graffiti and terrorism, saying that graffiti is being treated as a minor terrorism act. That’s not at all what we’re saying. We’re saying some minor terrorism acts are expressed in graffiti.

I think Banksy is a very cool artist, and I respect his social messages, so this is not about any real criticism of Banksy, but he makes himself open to this type of stuff just by the fact that he puts his artwork on public places.

Q: What you were discussing a minute ago about how you can use this to analyze smaller crimes in an attempt to—is it to predict a bigger crime? It sounds like a sort of pre-crime kind of thing you’re working on.

A: The idea is to use minor events that are believed to be related to a terrorist organization, so graffiti is one of them, banners and leaflets are others, but also a lot of minor crimes if you can connect them with the group—credit card fraud, thefts—these types of things have been used to support them. Our contention is: rather than wait for the explosion, pay a lot of attention to these minor incidents. Record information on them. Analyze them.

I’ll use the example of the incidents that occurred in Paris. People say, ‘Well, we were aware of them, but they just didn’t rise to the level that we thought we needed to do anything more about them because there’s so many people in that same category.’ So the goal of this is to give another overlay of intelligence. You might say, ‘Okay, we’ve identified these locations, we’re now looking in that area, we’re looking at our list of people who are on our watch list, or who are known subjects and, hmm, we have three people that are further prioritized by the spatial analysis. Maybe we need to need to be paying a little more attention to them, especially since these activities seem to be ramping up.’

Q: Could you use that with geographic locators on tweets or pictures? Is it possible to do this analysis with that kind of information?

A:  You could if someone had the GPS coordinates or if you knew maybe the cell tower. This has been discussed before. If I go take a picture of Boulder Dam, am I just a tourist taking a picture of a big tourist site, or am I planning something? One piece of data doesn’t mean much. When you get a pattern of data, that’s something that can be analyzed and interpreted. Let’s say I take a picture of the Eiffel Tower in front of the casino in Las Vegas. That type of pattern might suggest I’m just a tourist. But if my next one is of another dam or electrical station, someone might say ‘Well, that’s kind of strange’. What do the different pieces of the puzzle mean when you put them together? And one of the advantages of geographic profiling in geography is a common denominator for so many different types of information sources.

Q: Correct me if I’m wrong, but it sounds to me that this would require constant surveillance. Everything you’re describing is doing it looking back, retrospectively. Is it something that police or intelligence agencies would need to constantly monitor to actually make it effective?

A:  Well, it’s not absolutely essential, but it would definitely be wise to do so. If you left gaps, you run the risk of missing out on something… We always have a list of suspects for whatever reason. I think the terrorism watch list in the United States went over a million people some years ago. So, they have these people. What we’re arguing here is: don’t ignore the information associated with minor incidents that may seem inconsequential… Graffiti may not mean much at all, certainly it doesn’t get any headline attention. We’re saying well, maybe there’s intelligence there. One piece of graffiti doesn’t mean much. Forty pieces of graffiti might mean something… It’s all about connecting the dots.

Q: Did analyzing all the Banksy information give you any more meaning into who he is or what he’s trying to do?

A: No, other than y’know, Gunningham was a good match for it.

Q: So no more insight into the art itself.

A: Not from me. The doctoral student that did the research, maybe she found something, but if she did, I didn’t hear about it.

This interview was condensed and edited for clarity.