Capt. Trevor Greene: ‘This was a long time coming’ 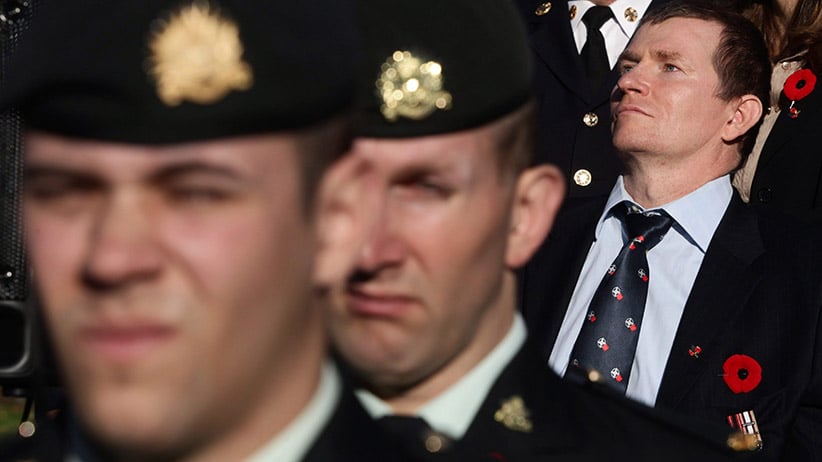 On March 4, 2006, Canadian army Capt. Trevor Greene was sitting with the elders of a village in Afghanistan—helmet off as a sign of respect— when a local teen swung an axe into his skull. Greene not only survived the attack, but the former journalist has since written two books and achieved a remarkable physical and mental recovery. In a week that saw two soldiers killed on Canadian soil by extremists, Maclean’s senior editor Jason Kirby spoke with Greene by phone from his home in Nanaimo, B.C.

Q: Before we talk about the events of the last few days, I think Canadians would like to hear how your recovery and rehabilitation is coming along. What can you tell them?

A: It’s going excellent. I’m getting stronger everyday. I’m walking with a walker; it’s getting better every day.

Q: What emotions went through you this week when you heard of the attacks on Cpl. Nathan Cirillo in Ottawa and Warrant Officer Patrice Vincent in Quebec?

A: I was shocked. I figured Muslim extremists would strike in Canada, but didn’t know how, and wasn’t prepared for it. Because in war, it’s all around you, and you can go any time. It’s funny, I always thought it was the other guy that was going to get hit. When I was in a roadside bomb explosion, I thought it was my silver bullet—I was going to get out of the war without being damaged. Two weeks later, the axe fell. So I think these guys were totally unprepared.
It’s a great honour to be asked to guard the Tomb of the Unknown Soldier and I thought of how Cpl. Cirillo would have probably woken up early that morning to carefully shine his shoes and polish his brass. Then proudly put his uniform on and maybe practised his rifle drill in his head. And when he got to the tomb, he would have repositioned his glengarry on his head and pulled on those slippery white gloves, maybe willed himself to hold on to the rifle.

Q: Two soldiers in two days were killed in uniform. In parts of the country soldiers were at one point advised not to wear their uniforms in public, though many did in defiance. As a former soldier, what does the uniform mean to you at this time?

A: Oh, man—it’s a symbol of our commitment and our effort. And I think it’s an important symbol. But this was a long time coming, I think.

A: Because we’ve been on the world stage since Afghanistan in a big way. We punched above our weight in Afghanistan, a small army doing a large army task, and doing very well at it. And we’ve sent our special forces and our fighters to Iraq, alongside those of America and some others. It was inevitable we would be attacked from the inside. We have Parliament buildings that are easily accessed, so you can get to our legislators far easier than the Americans and the British.

Q: Do you think that should change?

Q: The question has been asked by a lot of people: Will this change Canada? What are your thoughts?

A: I don’t want to make it less democratic. But more vigilant.

Q: Do you have a message you’d like to convey to Canadians this week?

A: Soldiers have been putting their lives on the line for the country since the First World War, and we are still. We need your support, now more than ever.

Q: Do you have anything you’d like to say to the families of the two soldiers?

A: Be proud. It’s like they were killed in war. They did not die in vain. Be proud of them, and be comforted by their sacrifice, as much as anybody who has lost a soldier in war does.