Thousands continue to await return of electricity in New Brunswick 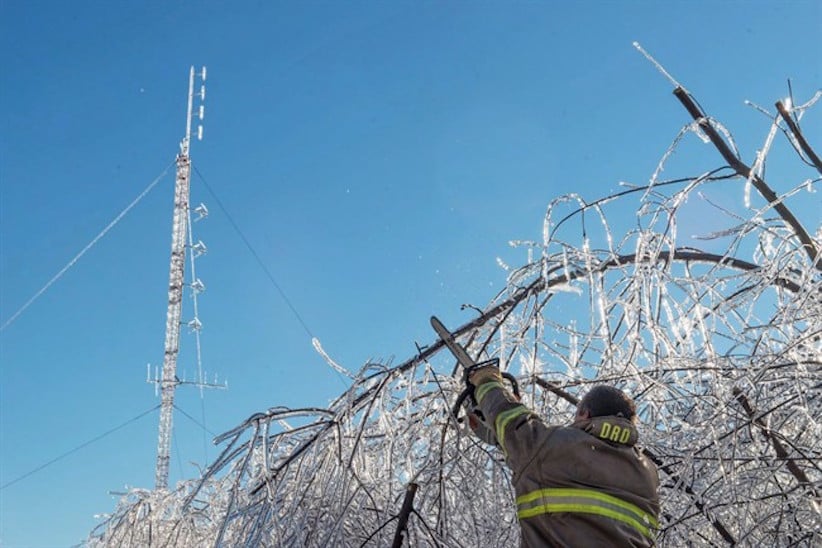 Members of the Baie Sainte Anne Fire Department clear a road so technicians can get to the emergency radio repeater tower to charge the batteries in Escuminac, N.B. on Sunday, Jan. 29, 2017. There are still about eight thousand customers awaiting the return of electricity in northern New Brunswick today, more than a week after the ice storm that wreaked havoc in the province.THE CANADIAN PRESS/Diane Doiron

“The poles can’t stand up to these kinds of storms,” David Coon said as thousands of customers awaited the return of electricity in northern New Brunswick on Wednesday, more than a week after the devastating storm.

Coon recalled the 1998 ice storm that required army assistance in New Brunswick, Quebec, eastern Ontario and the northeastern United States, adding there has been a steady stream of violent storms that he said demands tougher standards for NB Power’s distribution system.

“This is getting you to steel poles and burying lines in some areas,” said Coon, the sole Green member of the legislature.

Higher standards for the utility must be “built right into” the Liberal government’s promised climate change legislation, Coon said.

Premier Brian Gallant, who has been providing daily storm briefings from northern New Brunswick, hasn’t committed to an independent review of the utility’s response or any legislated changes in standards. He was not immediately available for comment on Wednesday.

Gaetan Thomas, the president of NB Power, said Tuesday the utility’s infrastructure is in good condition, and said his engineers will be reviewing the storm response.

He said line crews patrol the lines and regularly replace power poles that are aging.

“There are a few poles here and there that may have been due, but the large majority were in excess of the design. We are talking about green, new poles that broke … and when one pole breaks it creates a domino effect,” he said.

“In our view the entire infrastructure, thousands of poles, withstood the weight of ice that was three to four times what they were designed for.”

The NB Power website shows many of the current outages are on the Acadian Peninsula, on Miscou and Lameque islands, and some residents in Kent County and the Miramichi area also await power.

People were continuing to use warming centres as close to 400 power crews and about 200 troops continued work on the cleanup and restoration efforts.

“I’m currently stopped at the side of the road and there are two poles right in front of me, just snapped,” said Major Turmel Chiasson, who is overseeing troops aiding in the cleanup near his hometown of Pidgeon Hill, where his mother awaited a return of power.

The officer said his soldiers are still seeing residents using barbecues and generators to keep their houses warm, after two carbon monoxide deaths and over 34 hospitalizations in the days since the storm.

“They (barbecues) are right in the house,” he said.

Dave Young, a spokesman for the New Brunswick Energy and Utilities Board, said under existing regulations the board can consider whether the utility is spending its funds in “prudent” way on maintenance and storm preparation.

The company will be coming before the board to seek its 2017-18 rate increase in three weeks, and is facing public pressure to keep its costs down.

“It (storm readiness) could come up as part of that discussion,” said Young, adding it’s unclear how climate change might factor into the board’s mandate to set rates.

Lawyer Peter Hyslop, who has represented energy users in rate hearings, said NB Power should show how much new funding it requires for its distribution system — as well as what it could save in storm repairs.

“For NB Power to set out their standards (in a board hearing) and have them subject to cross examination would not be a bad thing,” he said.

Heather Black, the province’s public intervenor for the energy sector, declined to comment on the issue, noting it was outside of her mandate.