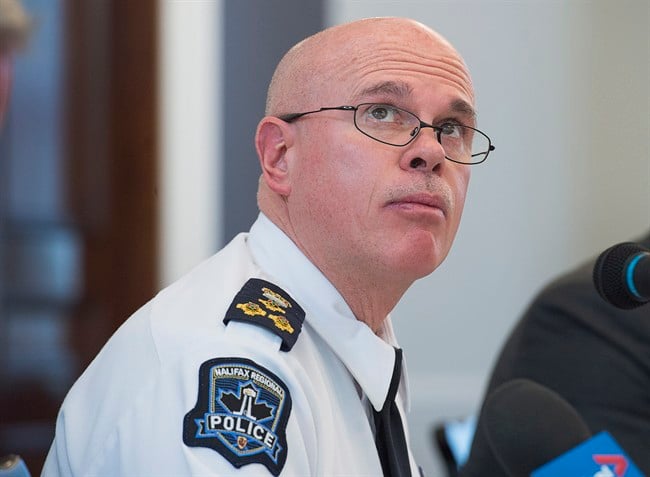 Chief Jean-Michel Blais of the Halifax Regional Police views an overhead projection as he attends a meeting of the Board of Police Commissioners in Halifax on Monday, Feb. 27, 2017. THE CANADIAN PRESS/Andrew Vaughan

HALIFAX – Halifax police are adamant that bad record keeping rather than any criminal activity by its officers was behind the “misplacement” of 3,000 of nearly 10,000 drug-related exhibits uncovered in a recent inventory.

Among the unaccounted for items were cocaine and other drugs, and more than 200 cash items totalling $100,000.

Police Chief Jean-Michel Blais told reporters Monday that the force was confident there had been no wrongdoing.

“We’re very confident that our officers did not do anything untoward,” said Blais. “What we are looking at and what we have determined is that there are some gaps in our process and in our policy and in the way that we did things.”

Blais released the overall inventory numbers during an appearance before the city’s board of police commissioners, during which he also gave an update on a drug exhibit audit released last June.

“The findings were … that electronic documentation and quality assurance were lacking,” Blais told the commissioners.

He also blamed a lack of standardized officer training and the amalgamation in the mid 90s of three police forces for the lax documentation.

Blais said searches of records systems are ongoing for the missing items, and while some had been found, he didn’t know at this point exactly how many.

But a handout given to commissioners showed police had located 123 of the cash items totalling $72,464 as of Monday. There were no misplaced firearms, although a mini stun gun was still unaccounted for.

The various drugs unaccounted for included 1,540 marijuana plants, more than 1,300 grams of cocaine and opiods including hydromorphone, morphine, Valium, and 100 millilitres of methadone.

Police said 34 of 72 missing exhibits in the original audit had been located, while it’s believed that 32 of the remaining 38 items were destroyed. The remaining six cash exhibits totalling $4,956 were believed to have been deposited in the special enforcement section’s bank account.

“The review team found no evidence to suggest exhibits were misappropriated, however this conclusion is not definitive,” the report states.

It said progress had been made on the 34 recommendations made by last year’s audit in areas such as adherence to policy and procedure and training.

Blais said the force would have to wait to see if council would approve the hiring of a custodian to oversee the drug exhibit inventory.

He said the presence of three other custodians to oversee non-drug related exhibits was the primary reason police are sure there aren’t similar problems.

Police commission chairman Steve Craig said he was satisfied with what he heard from Blais when it came to determining what had happened to some of the exhibits.

“I’m not getting any indication that there’s anything overtly underhanded or criminal activity associated with that,” Craig told reporters. “Things do go missing and the fact of the matter is we need to have an ongoing look at that.”

But Craig expressed concern that the audit process would take too long to complete.

Blais wasn’t specific, but said the process would likely take the “next few years” to complete.