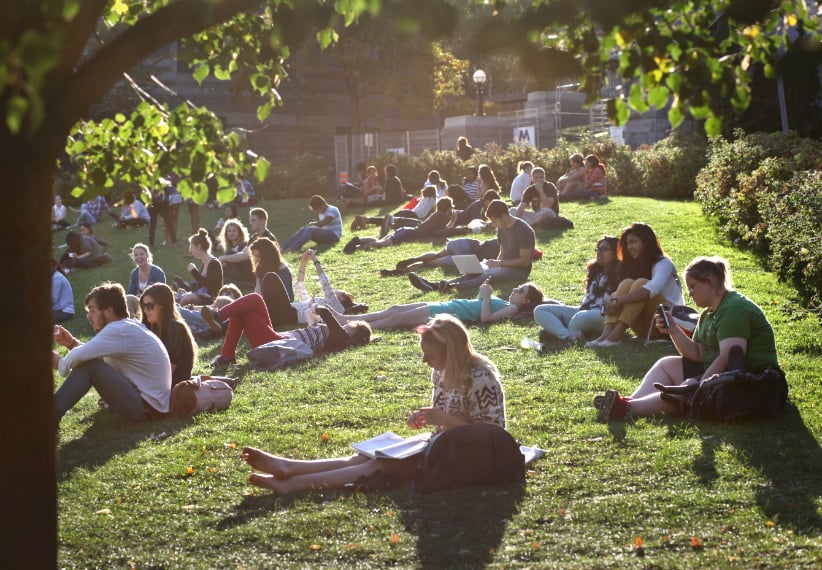 Students on campus at McGill University. (Photograph by Roger LeMoyne)

If Andrew Potter wasn’t a well-connected white guy, would anyone care?

If you haven’t gathered, Potter is a former journalist with a PhD in political philosophy who, until last week, was the director of the McGill Institute for the Study of Canada. He wrote a controversial op-ed for Maclean’s and, although he later recanted some of his observations, McGill University distanced itself from his piece; shortly thereafter, Potter resigned from his post as director. Much ink has been spilled over the content of the original piece, and we won’t dwell on that here. Instead, we want to talk about the debate that took place in the days that followed. Many have noted that McGill’s interventions were problematic, from their initial tweet stating Potter’s views did not represent those of his institution, to their acceptance of his apparent resignation in the face of public and political outcry. All of this has a potential chilling effect on academic enquiry.

We don’t want to diminish that. But we do want to talk about the voices that have been dominant in this conversation, and how this affects the ones that have largely remained silent: women, people of colour, and Indigenous peoples.

By nearly any measure, Potter is a privileged white man. He is well-educated, has friends in high places, and held a prestigious position. (Disclosure: two of us contributed chapters to a book that he recently co-edited). He was also marginalized by his institution after expressing an unpopular—and arguably unscholarly—opinion. In some quarters, that someone like Potter would be disciplined in this way is the most delicious type of schadenfreude: for once, these observers have argued, white men are getting a taste of their own medicine. When a less powerful person loses their position, they shrugged, then we might care.

Here’s the problem: Potter’s marginalization is precisely the kind that causes concern because it is what is known in social science as a least-likely case—that is to say, on account of his stature and status, Potter should be the type of person most insulated from sanction and the least likely to face repercussions. His resignation is therefore a canary in the coal mine that exposes deeper systemic problems that will affect women, people of colour, and Indigenous peoples.

Look at the demographics of any large organization, and you’ll find that most positions of power are occupied by white men. That’s true, too, of academia. In Canadian universities, there are almost no Indigenous administrators or administrators of colour; tenured positions, particularly at the highest levels, belong disproportionately to white men. Women, people of colour, and Indigenous peoples typically don’t have the opportunity to lose their prestigious positions amid controversy because they don’t even get those positions to begin with.

Adjunct and contract positions—the most precarious academic work of all—are often carried out by women, Indigenous scholars, and scholars of colour. As one U.S. study notes, just as under-represented groups began to gain a toehold in the professoriate, the academic job market contracted. Permanent positions have been replaced by those with almost no job protection, as well as long hours and little institutional support. Even if scholars in these roles had time to pen op-eds on controversial topics, seeing a person of privilege be so easily cut loose would almost certainly only heighten the instinct for women, Indigenous scholars and scholars of colour to stay quiet. And yet these are the voices we need.

We know we also write from a position of privilege: we are white women (two with tenure, one without) who work in academic institutions and have the luxury to follow these debates on social media. And yet, whenever we comment publicly on an issue, we look over our shoulders and wonder about the potential effect that public engagement might have on our careers. We debated the wisdom of even commenting on this case, concerned as we are about the blowback it might elicit, but we are intervening because we believe that the burden of exposing problematic institutional practices shouldn’t fall only on the shoulders of the most marginalized.

This isn’t just a white-guy problem. The incident sends a signal to our colleagues who have important things to say, who don’t have a platform of privilege from which to say it, and who don’t have a safety net to fall back on if things go south—or a coterie of well-connected commenters who mount a forceful defence. When voices are silenced by universities, there is a real risk to those who dare make controversial observations based in rigorous empirical research, or conclusions that point to systemic discrimination, injustice, and current and past wrongs. These are things that might “bother” or “offend” the public, and which have the potential to place even greater pressure on institutions.

Indeed, McGill’s principal, Suzanne Fortier, suggests that the Institute’s role is not “to provoke, but to promote good discussion.” This is a prescription for tepid public discourse. We have brilliant colleagues whose provocative voices need to be made louder, not silenced. And if universities can’t stand up to this pressure and defend their researchers on the “easy” cases—like ones involving a privileged white man—they most certainly won’t have the courage to do so when confronted with the “difficult” ones.