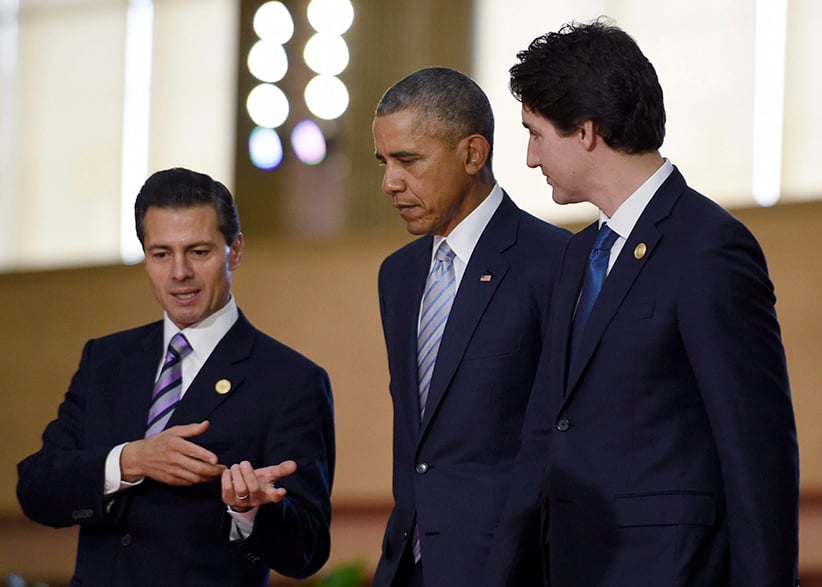 North American leaders meeting in Ottawa this week are being confronted with the seismic economic ripples caused by Britain’s decision to leave the European Union.

Canada and Mexico must also take the opportunity to strengthen their bilateral co-operation as a counterweight to an incoming U.S. administration in 2017 that is likely to be anti-trade and more inward-looking about American interests, experts say.

Those thorny issues will lurk beneath the surface of what will be an attempt by the so-called Three Amigos summit to announce a new mechanism that keeps Canada, the U.S., and Mexico co-operating closely after President Barack Obama leaves office in seven months.

Their three-way bonhomie swims against a current of global disengagement in the U.S. presidential election. The presumptive Republican nominee Donald Trump has talked about new trade barriers and criticized international military co-operation, while his Democratic rival, Hillary Clinton, has opposed the new Trans-Pacific Partnership deal.

Now, the Brexit vote, which marks the start of an unprecedented negotiation to take Britain out of the EU, provides a stormy backdrop to the carefully crafted, sunny script of North American co-operation and solidarity to be delivered by Trudeau, Obama and Pena Nieto.

Read our reporting and analysis of Brexit here

“It’s a great message to the world that we’re working together, we believe in trade, we have progressive governments,” said McKenna.

Fen Hampson, a foreign policy expert with the Waterloo, Ont.-based Centre for International Governance Innovation, said the European Union is the biggest market in the world and its fate “has very important implications for North America.”

“That’s surely now going to be an important and central topic of discussion,” said Hampson.

Carlo Dade, a leading expert on Canada’s North American relations, said he expects the leaders to make “a bland statement” about the Britain-EU divorce. He said they’ve got a good story to tell about their own continental alliance.

“In North America, we have a more limited project (than the EU). It was always more focused on the bare necessities to promote economic growth. Because of the bare necessity approach, we don’t have all the same issues they have.”

It may fall to Obama to offer Brexit fallout reassurances, which could come during his address to Parliament to be delivered late Wednesday after the North American leaders’ summit.

“What he says — or doesn’t say — about softwood lumber, the future of North America and world trade after Brexit will be taken as a sign of whether the British exit from the EU is a bump or the first step in a cascade of bad news for Canadian exports,” said Christopher Sands, director of the Centre for Canadian Studies at Johns Hopkins School of Advanced International Studies.

An official in one of the countries said the leaders will announce more than one process designed to tighten long-term co-operation over multiple areas. They will seek to build links that withstand a bombastic U.S. election marked by talk of walls, ripping up trade deals and scrapping climate commitments.

Sources in two countries say the summit’s goal is to entrench regular, ongoing collaboration in a host of areas ranging from climate change to public health issues like the Zika virus, peacekeeping, ocean management and refugee flows.

In a recent letter to U.S. Commerce Secretary Penny Pritzker, the Canadian American Business Council called for the creation of a three-country cabinet group like the U.S.-Mexico one created in 2013.

“Continued and deepened economic and commercial co-operation, integration and policy alignment are necessary. This means that we need established platforms in which to address the economic relationships of both bilateral relationships shared by the U.S.”

But Hampson and Dade say Canada and Mexico should be focusing on strengthening their direct relationship so they can help each other deal with the rising American protectionist sentiment.

Mexico and Canada co-operated to force the U.S. to abandon its country-of-origin rules of labelling on its meat products after victories at the World Trade Organization. They’ve also worked together to fight protectionist Buy American rules.

The Mexicans can be particularly helpful to Canada because they have four times as many consulates in the U.S., which gives them greater face time with Congress, said Dade.

“We need to make sure that the next time the Americans screw us on something, the Mexicans are going to pick up the phone and say, ‘sure, what do you need?'”