Evan Solomon on the campaign's make or break moments

Campaigns are made up of endless details, thousands of signs hammered into lawns, rented jets, military-like planning of Get Out the Vote, tens of thousands of hands shaken and doors knocked and, in this case, more than $50 million of spending for each campaign. In the end, however, every campaign comes down to a turning point, a moment that comes to define the character of the race and, just as likely, the fate of the leader.

Deciding on what constitutes the turning point is something of a parlour game for political watchers, and it can be debated endlessly. Was it the moment when Justin Trudeau defended his father during the Munk debate on foreign policy, as the Ottawa Citizen’s Mark Kennedy told me recently? Was it Tom Mulcair’s stance on the divisive niqab debate, which put him offside with much of his key vote in Quebec, but was hailed as an act of integrity by his supporters? Was it Stephen Harper’s launching of the barbaric-cultural-practices hotline, a paranoid stunt that solidified his turn toward the dark politics of division? Or was it his income-splitting promise, which could drive middle-class voters to him?

There are countless moments that, strung out in some political algorithm, add up to a mysterious force called momentum. Or worse, subtract into a collapse.

Here are the three turning points that defined this campaign:

TOM MULCAIR: ‘Our first budget will be a balanced budget.’ 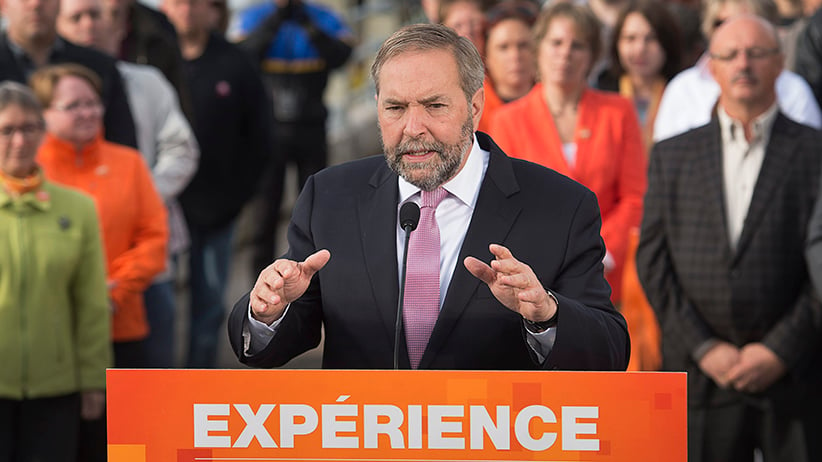 For Tom Mulcair, it was his balanced-budget promise. Back in late August, he stepped up to announce that the NDP would not only balance the budget in Year 1 of its mandate, but for four successive years. It was a startling announcement that took attention away from all his other promises, national child care and $15-an-hour minimum wage. Tactically, it was a response to the old Conservative attack that an NDP government would run up huge deficits; cue the Conservatives’ desert-island disc classic, “Bob Rae and Ontario Dippers.”

This mythology—that letting the NDP control the economy would be like lending your kid a new car, only to find him doing doughnuts on the parking lot of the shopping mall—is so engrained into the NDP psyche that they felt obliged to deal with it. They bet the election was all about getting rid of Harper, but not if the risk was too high.  So they offered a low-risk alternative. It was an understandable triage by the NDP war room, trying to cauterize a wound before it got infected.

But the medicine ended up poisoning the patient. Progressives have not waited a generation for an NDP government only to be promised a Conservative-lite alternative. After years of preaching the dangers and illogic of the Conservatives’ austerity obsession, years of Mulcair arguing that the balanced budgets were just fiscal sleight of (invisible) hand masking Harper’s deep antipathy toward activist governments, Mulcair suddenly emulated the very same position. Immediately, NDPers were put on the defensive. How can they promise new programs and still balance a budget when the economy is, by their own argument, sputtering? They were forced to explain what they would cancel to hit their coveted balance, and released a thinly calculated economic platform based on the same outdated economic numbers they had accused the Conservatives of using. They were left doing what politicians hate to do: Explain instead of proclaim. It also had the unintended effect of affirming the notion that balanced budgets are, really, the critical benchmark for any government. If anyone, it helped Stephen Harper’s credibility.

From that moment on, Mulcair’s campaign began a steady drift back down the polls. Yes, the niqab issue in Quebec is critical, and will hurt the NDP in the province it most needs to protect. But in standing for balanced budgets, Mulcair lost his political wedge, his progressive edge, and, maybe, the entire campaign. 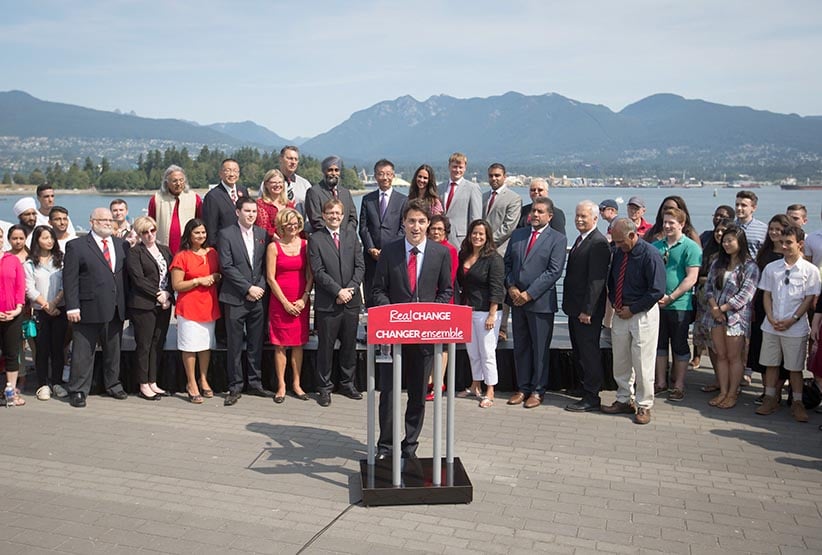 Liberal Leader Justin Trudeau is flanked by local candidates and supporters as speaks during his election campaign launch in Vancouver, B.C., on Sunday August 2, 2015. A federal election will be held on October 19. (DARRYL DYCK/CP)

I would also argue that the flip side of this issue, deficit spending, was the turning point for Justin Trudeau. He, like Mulcair, had overcompensated for a Conservative attack, but on a different issue: security.

When Trudeau quickly supported the controversial Bill C-51—the anti-terror legislation—his position appeared to be all politics and no principle. We support some of the bill, he said . . . um . . . enough to vote for it, but, um, er, if you elect us, we will change it. Explaining . . . and explaining. Liberals were afraid that opposing both the fight against ISIS and the anti-terror legislation would make them look weak on security.

Remember, Trudeau was still feeling the pain of his flippant comment about whipping out F-18s. So they tried to have it both ways. A senior union leader told me he was so furious, he told Trudeau he had allowed himself to get outflanked on an issue that was really about the Charter of Rights. “His own father’s legacy.” It stung.

The Liberal numbers started to fall and, for a moment, Mulcair, seizing on the file, looked to be the agent of change. Was this issue the little butterfly flap, the mysterious little thing that would start an Orange Hurricane and sweep Mulcair to power? No. The butterfly blew away. The anti-terror legislation never got the long-term national traction the NDP wanted. Trudeau stood by his position, took the punch and shook it off.

For weeks, the Trudeau camp kept throwing issues against the wall, hoping one would stick. Their child care benefit. Taxing the rich. Cancelling the F-35. They spoke about infrastructure, and, while it seemed important, the word has no romance to it, like trying to kick off a dance party with a jackhammer.

But after Mulcair began to pray from the balanced-budgets hymn book, Trudeau found his moment: deficit spending. In a climate of low interest rates, Trudeau announced he would not be bound by the same benchmarks as the Conservatives . . . and the NDP. It looked, at first, like a major gamble. Were Liberals giving up on their hard-won Chrétien-Martin legacy as deficit slayers? Would Harper seize on Trudeau’s thin economic resumé and hang the risky-business frame around his neck? He tried to, but it didn’t work.

The deficit promise turned out to be about much more than infrastructure—something the other parties also promised to address. It was really a rallying cry for those who believe governments can make a difference. Progressives looking for a real alternative started to leave Mulcair and move to Trudeau. Pundits kept saying Trudeau had outflanked Mulcair on the left, but it was more than that. Trudeau had finally found a way to do something his party had not been able to do for more than a decade: Define what it means to be a Liberal.

The deficit spending signalled it was okay to believe that government can play a meaningful role in the country. Even more important, it made Trudeau’s political horizon line longer than the next economic update. Suddenly, all those individual policy ideas that were not sticking coalesced, and began looking like a vision, a word politicians toss around, but rarely have. It was the campaign’s gestalt moment, when it went from looking like one thing to suddenly looking like something else entirely, at the exact same time. It left Mulcair and Harper resembling angry accountants shaking spreadsheets at the future. If Trudeau wins, this will be the turning point.

STEPHEN HARPER: ‘This is not about me’ 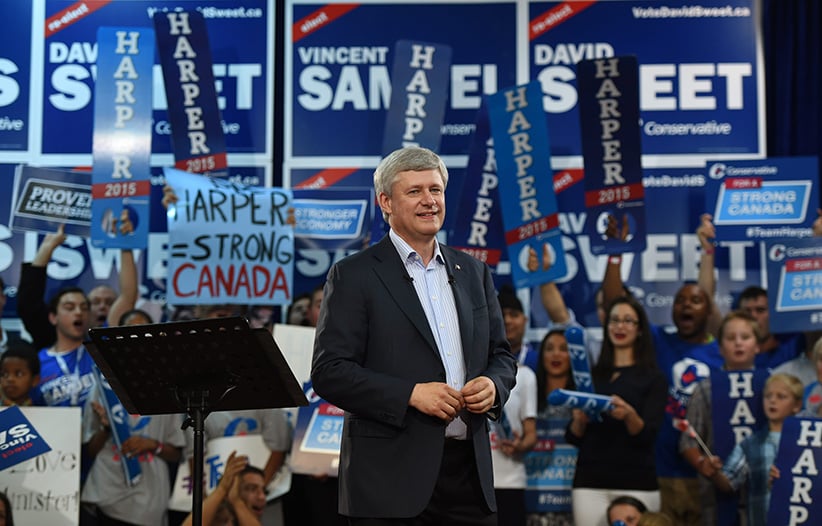 For Stephen Harper, the turning point came at the end of the campaign.

He has already cycled through a few iterations of the campaign. He waded through the ethics issues at the start, knowing it would be a slog, but trusting that the long campaign would dry the mud and, eventually, it would flake off. His goal was always to get that 39 per cent, and he knew his core base of 30 per cent was going to stay. That made his strategy simple: Keep the campaign about three things: economy, security and leadership. His platforms were, as ever, targeted. Income splitting. Money for seniors. Landing the Trans-Pacific Partnership trade deal. Follow those economic promises with some security buzzers, such as stripping dual citizens accused of terror of their passports, challenging the niqab issue in the courts, announcing the barbaric-practices hotline, and, finally, closing the deal with the “too risky to change” leadership theme.

It hasn’t worked out that way. Harper’s turning point came after the debates, which did not expose Trudeau as the empty vessel the Conservatives expected. Harper wanted the election to be about a choice between the Conservatives and the NDP, because he believed people would not risk that kind of huge shift. The key was suppressing the Liberal vote. But Harper wildly underestimated the change factor, and how much this campaign became a referendum on him. To their own horror,  Conservatives realized that their leader, their founder, was a liability.

A Conservative ad first revealed the turn, admitting that Stephen Harper was not “perfect.” It was just the start. By the end of the campaign, there was Harper, during an ad in high rotation during the baseball game, looking straight into the camera and saying, “This is not about me.” It was an astounding moment. His campaign began with the theme of leadership, the brand was always “the Harper government.” Suddenly, here was Stephen Harper literally giving up on himself.

It’s not about him? I watched the ad and felt like Galileo, sensing that the entire constellation of belief around the Conservative party has collapsed. It was the most surprising and most radical turning point of the campaign.

Of course, none of this means the results are set in stone. Campaigns matter and voters have their own turning points. Maybe Harper’s astrological realignment will work. Maybe Trudeau’s so-called vision is actually just a terrifying threat of bleeding ink that will turn off voters. Maybe Mulcair really is the Goldilocks choice—not too left, not too right. Whatever it is, these three moments, for me, have defined the campaign.