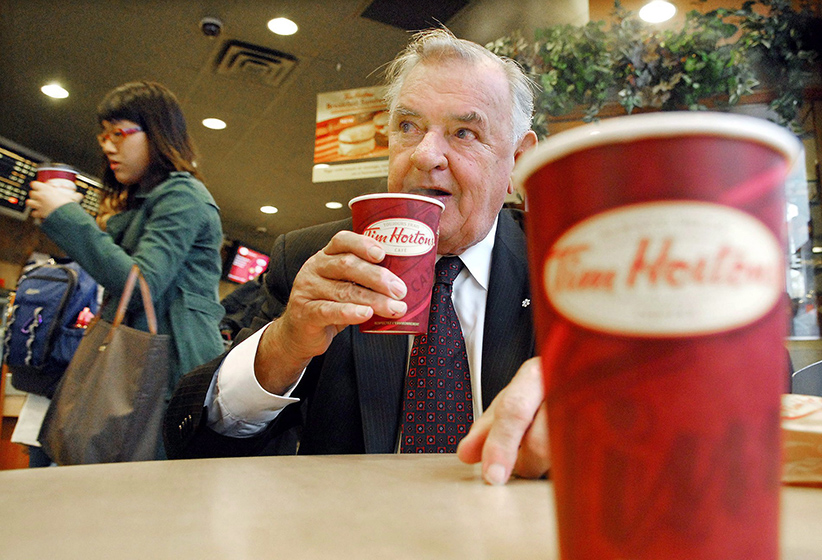 TORONTO — A sexual-assault lawsuit against the billionaire co-founder of Tim Hortons should be thrown out without a hearing on its merits because the matter was long settled and the civil claim against him was filed too late, his lawyers argued Tuesday.

In an Ontario Superior Court hearing, lawyers for Ron Joyce painted the plaintiff as someone trying to extort an honourable businessman with her $7.5-million suit.

In her statement of claim, the woman, 35, alleges Joyce sexually assaulted her at his home in Burlington, Ont., on May 19, 2011. She commenced her action on May 31, 2013 — outside the two-year limitation period, Joyce’s lawyer Chris Kostopoulos argued.

Kostopoulos also noted Joyce sent a $50,000 cheque to the woman’s lawyer in late 2011 on which the businessman had written her name and “account paid in full.”

The cheque flowed from an amicable settlement reached between the parties related to her threatened $1.6-million lawsuit over the alleged assault, Kostopoulos told the court.

The woman cashed the cheque and, by her own admission, resumed a platonic relationship with Joyce, who is 50 years her senior. However, she now argues the money was reimbursement for the legal fees she had spent on suing him and on therapy.

In an affidavit, Joyce maintains he had begun legal action to recover $150,000 he had lent her — she says it was only $100,000 — to help her pursue a sexual-harassment case against her former employer. He says he agreed to drop his claim and give her another $50,000 so she would stop pushing “false allegations” against him.

On May 14, 2013, the woman went to Joyce’s home and secretly recorded their conversation, something she admitted to doing frequently. Transcripts show she discussed becoming his full-time assistant and asked why he didn’t marry her.

Days later, she went to his lawyer — with his blessing — ostensibly to talk about a real estate proposal but, in another secretly recorded conversation, broached the alleged sexual assault from almost two years earlier.

“We say she goes with a scheme:,” Kostopoulos said. “It is clear from the recording that (she) is out to gather evidence against Mr. Joyce.”

She then filed notice of the $7.5-million claim against Joyce.

Kostopoulos argued the woman clearly knew on May 19, 2011, that she had a claim but neglected to act on it for more than two years, putting it beyond the statute of limitations.

For her part, the woman maintains she only found out she could sue Joyce after meeting her lawyer in late June 2011, and is therefore within the limitations period.

She also argued she had never agreed to a settlement of her initial $1.6-million sexual-assault complaint, and any suggestion of such an agreement was a fabrication of the lawyers involved.

Justice Paul Perell gently and patiently pressed the self-represented plaintiff on what the $50,000 payment by cheque was if not to settle her claim.

“It was an advance on the lawsuit,” she responded. “It was never discussed that would be a settlement.”

Perell called the way the proceedings unfolded “kind of bizarre,” saying much hassle could have been avoided had there been a signed release and settlement minutes in November 2011.

Kostopoulos agreed, but said the record makes clear Joyce believed they had a deal and the woman acted as though they did as well.

“Mr. Joyce trusted a friend,” Kostopoulos said. “Unfortunately that deal has now gone sideways on him.”

The lawyer also noted the woman provided no recordings from November 2011 that might have shed light on whether the matter had been settled, despite having numerous other ones.

Perell said he would hear further from the woman on Wednesday.

The Canadian Press does not name victims of sexual assault unless they consent.