Is it time to chuck welfare? 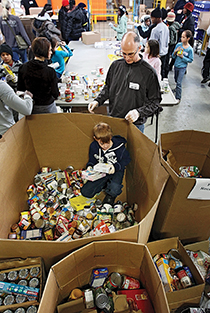 On April 23, Maclean’s hosts “Health Care in Canada: What Makes Us Sick?,” a town hall discussion at Theatre Junction Grand in Calgary. The free event—focusing on the social conditions that impact the health and longevity of Canadians—is held in conjunction with the Canadian Medical Association. It will be broadcast by CPAC. The conversation on the health impact of disparities in income, education, housing and employment continues online at healthcaretransformation.ca.

Last week UNICEF, the United Nations agency, released a report on the status of Canada’s children compared to 28 other industrialized countries. It placed Canada’s kids a mediocre 17th in overall well-being. Among the results are poor rankings in many basic necessities to reach a healthy, productive adulthood. Canada’s in the bottom third in “relative child poverty”; there are too many teens spinning their wheels by not being in school, training or employment; and we’re 27th (ahead of only Latvia and Romania) in health and safety, including vaccination levels and rates of infant and child mortality. In the 10 years since the last UNICEF survey, our children’s view of their life satisfaction dropped seven notches to 24th place. Only five Eastern European countries fared worse.

At the root of this, and other international reports on Canada’s subpar performance, is poverty and all its ugly, spendthrift offspring: illiteracy, undereducation, unemployment, substance abuse, teen pregnancy, fractured families, incarceration, mental illness, excessive hospitalization and chronic disease. The percentage of Canadians living below the poverty line has stalled in the 11-14 per cent range for more than three decades, despite—and in many cases because of—an array of expensive government programs. Federal and provincial governments plead they are hamstrung by debt and soaring costs for health care and social programs, yet, critics say, they offer little in the way of bold thinking or new approaches.

Now a growing array of advocates across the political spectrum are reaching into the past for a program they say has the potential to control social spending, slash poverty rates and improve outcomes in health and education. It goes by many names—the guaranteed annual income or the negative income tax among them. Essentially, it would chuck out the inefficient, administrative nightmare that is our welfare system and replace it with a grant paid through the tax system to top up the income of Canadians to a certain minimum level—money to spend as families see fit.

There is a crying need for the next generation of “big ideas” from government, says Glen Hodgson, senior vice-president and chief economist of the non-partisan Conference Board of Canada. Hodgson raised the idea of a pilot study for a guaranteed income during a meeting last week with Ontario’s finance committee. Such a program could replace, among other support programs, a “paternalistic, interventionist welfare system” that claws back money from those who find work or enroll in school. It would lower administration costs by delivering the money through the tax system, and it could reduce the devastating health impacts of poverty, he says. “It could be a triple win.”

The notion of a guaranteed income is often dismissed as a utopian folly, certain to destroy the national work ethic and bankrupt the country. Yet advocates like Conservative Sen. Hugh Segal note the idea has a strong free-market pedigree. In 1985, the Macdonald royal commission into Canada’s economic future in a free-trade world called its version of universal income security “the essential building block” for social programs in the 21st century. The grandfather of guaranteed income, the negative sales tax, as he called it, was the late American economist Milton Friedman, the ultimate proponent of unfettered markets and small government. He said giving families the right and responsibility to spend support money as they see fit is a wiser investment than having priorities set by an expensive, oppressive bureaucracy. “If you put the federal government in charge of the Sahara Desert,” he said, “in five years there’d be a shortage of sand.”

Segal says a key benefit of guaranteed income would be the improved health of Canadians. “Poverty is the most dependable predictor of bad health outcomes,” he says. “If we are unable to stem the tide of people who end up in hospital prematurely not because they’re old, and not because they’re predisposed to some horrible illness, but simply because poverty has brought them to that circumstance, we’re going to find ourselves in a seriously unmanageable context.”

Fresh research by University of Manitoba health economist Evelyn Forget on an experiment into guaranteed income, conducted in the farming community of Dauphin, Man., between 1974-79, found that even modest financial security cut hospital visits by 8.5 per cent compared to similar Manitoba communities.“When you realize that Canada is spending something like $50 billion a year on hospitals,” Forget says of the potential reduction, “that’s a lot of money.” There was a decline in accidents and injuries, and significantly fewer visits to doctors or hospitals for mental health reasons, perhaps because a measure of financial security reduced anxiety or depression, researchers concluded.

Forget admits she was surprised at the social impact of the modest income security experiment when her team analyzed the neglected data from four decades past. She found the program “put to rest the myth that if you introduced a guaranteed income everybody will stop working.” The only groups inclined to stay out of the workforce longer were teen boys, who were less likely to be pulled out of school before graduation to help support the family. And married mothers had the chance to spend longer with their newborns at a time when maternity leaves were measured in weeks.

Since people kept a share of earnings above the benefit level, which was no higher than welfare rates of the day, there was an incentive to work all the harder, says Forget. Amy Richardson, a mother of six who operated a modest beauty salon from her home in Dauphin back then, said the money went for essentials like school books. “It was enough to add some cream to the coffee,” she told the Winnipeg Free Press years later. “Everybody was the same so there was no shame.”

While Dauphin was a short-lived 1970s experiment, that era also spawned the Guaranteed Income Supplement for seniors, an innovation that continues to improve lives for millions. The idea was born in the Ontario hothouse of a minority government when premier Bill Davis’s Conservatives were attacked by the opposition for the high rate of poverty among the elderly, many of them single women. Segal, then an adviser to Davis, recalls the plan was created within weeks. Rates of poverty as high as 30 per cent fell to five per cent. It eventually became a national program administered under the federal tax system. Hospital visits for younger retirees fell, longevity increased and seniors were more socially engaged, says Segal. “Why? Because they could actually live a reasonably comfortable life.”

Canadian poverty rates for the elderly are now among the lowest among peer nations of the Organisation for Economic Co-operation and Development (OECD). By contrast, Canada has among the worst scores (15th of 17 countries) in rates of child and working-age poverty. While critics say a guaranteed income is an incentive to “sit home and eat popcorn,” almost 68 per cent of those below the poverty line have jobs, says Segal. “They are working, they’re just not making enough to make their core requirements.”

Forget is working on cost-benefit models for a national guaranteed income program. But like Segal and Hodgson she doubts there’s political will for such a measure. “I think there is no appetite for big ideas,” she says. It’s a comment echoed by Hodgson, but he says it’s time for more pilot programs to test the theory. There were other radical ideas that now seem indispensable: pensions, universal health care, seniors’ supplements. “You can argue that everything we did in building a welfare state was wild and crazy,” says Hodgson. “And, guess what. It worked.”