Who is Trudeau's inner circle?

The Liberal's star attraction has the name and the buzz. But who is closest to him? 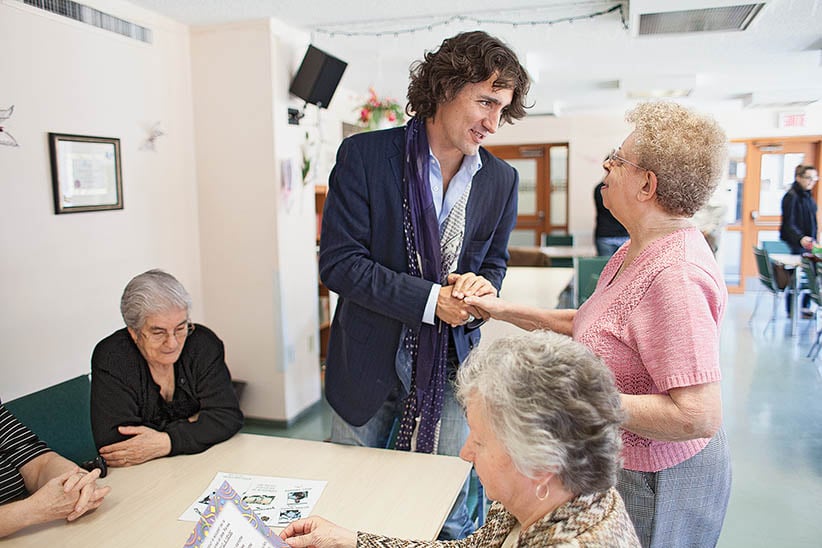 When Justin Trudeau stood in front of a Liberal crowd in a Winnipeg restaurant and bar early this month, it was no surprise that he easily grabbed and held the room’s attention. After all, the approximately 150 party members and potential supporters at the Pony Corral, a dockside establishment on the Red River not far from the University of Manitoba, had turned out expressly to hear the Montreal MP with the famous last name who is arguably the Liberals’ sole star attraction these days. But Neil Johnston, the local party organizer behind the event, said if the way Trudeau went over with the partisan patrons was predictable, the impression he evidently made on servers and cooks was less expected. They stopped working to listen, too. “The kitchen staff, they were probably recent immigrants,” Johnston said, “and they were talking about it afterwards.”

The spread of Trudeau’s celebrity well beyond the desperate, diminished ranks of Liberal stalwarts is what makes him by far the party’s most closely watched personality as it slowly ramps up to choose a new leader. Interim leader Bob Rae’s decision not to try to win the job for real next spring has left the eldest son of the late Pierre Trudeau strikingly isolated as the only putative candidate capable of generating serious buzz. Still, even Liberals galvanized by the scion’s sizzle wonder if there’s enough substance beneath it. And that leaves party insiders unusually curious about exactly which veteran strategists might gather around Trudeau to lend their experience to his excitement—assuming he relents and reverses his stated position that as the 40-year-old father of two young children this is the wrong time for him to attempt the leadership leap.

So far there is no obvious Team Trudeau waiting in the wings. Among well-known Liberal organizers, Bruce Young, a Vancouver-based consultant with Earnscliffe Strategy Group and a veteran of many federal and B.C. Liberal campaigns, is one of the more outspoken Trudeau enthusiasts. Young, an aide to Paul Martin during his brief prime-ministership, got to know Trudeau when they were both working on Gerard Kennedy’s run for the Liberal leadership back in 2006, the race Stéphane Dion eventually won. “To be frank, my initial read on Justin Trudeau was that he was well-known and useful in politics because of who his father was,” Young said. “After spending actual time with him, I found out that he’s tough as nails, whip smart, and not to be underestimated.” As a B.C. Liberal, he emphasizes the fact that Trudeau spent several years studying at the University of British Columbia and then teaching high school in Vancouver.

From Trudeau’s vantage point, the possible field of candidates brings complex personal and political calculations into play. New Brunswick MP Dominic LeBlanc, an old family friend who is very close to Trudeau’s brother Alexandre, might run. If he doesn’t, some likely LeBlanc backers would be expected to switch to Trudeau. The link to Kennedy is perhaps even more intriguing to insiders. He lost his Toronto seat in the 2011 election to the NDP, but has not ruled out contesting the leadership again.

Among strategists and rank-and-file Liberals, there is overlap between potential support for Trudeau and Kennedy. (Trudeau was recently the marquee draw at a Liberal fundraiser Kennedy hosted in his former Toronto riding.) The two men were introduced years ago by Gerald Butts, former principal secretary to Ontario Premier Dalton McGuinty and now president and CEO of the environmental group WWF-Canada. Liberals who know them both say Butts and Kennedy are good friends. However, Butts has been close to Trudeau since they met as McGill University students—and is widely assumed to be a key private source of advice on his next move.

It’s not likely Trudeau will make that move until he mulls over his options this summer. The party’s leadership vote is slated for April next year. Voting will be open not only to card-carrying Liberals but also to a new category of registered supporters. That’s a huge change from the former system, in which delegates cast ballots at a final convention. Nova Scotia MP Scott Brison said the new rules mean candidates can afford to wait longer to jump in. “In the past,” Brison said, “a latecomer would be at a significant disadvantage because all the potential delegates would be sewed up.” The new voting rules open the possibility of a late charge by a contender able to sign up many members and supporters, perhaps mainly through social media, rather than by relying on organizers working in the trenches across the country.

When it comes to social-media impact, Trudeau has few rivals in Ottawa. He boasts nearly 140,000 Twitter followers, compared to fewer than 6,000 for fellow Montreal MP Marc Garneau, for instance, and under 5,000 for Kennedy. Of course, an online following shouldn’t be a substitute for a compelling, serious message. What Trudeau’s might be, though, remains largely undefined. He’s associated more with style than substance. His official role in the House, Johnston noted, is as Liberal caucus critic for post-secondary education, youth and amateur sport. “It’s not,” he said, “economics or foreign policy.” If indeed Trudeau bows to growing pressure and runs for leader, the first challenge facing the team he will need to assemble is to fill in those nagging doubts.