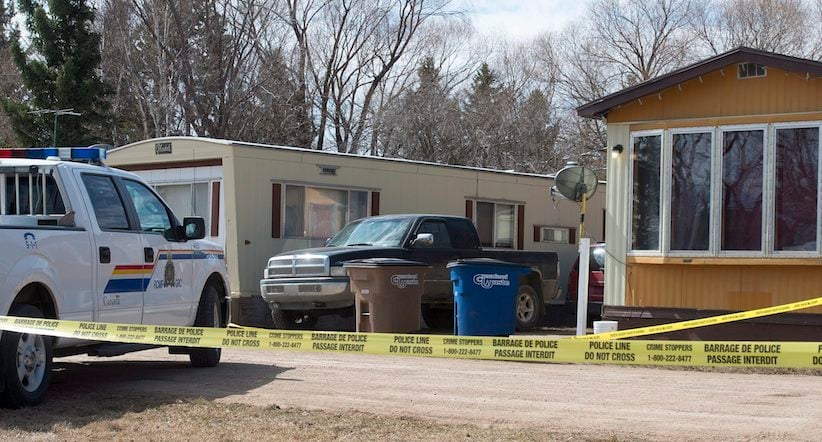 TISDALE, Sask. — He killed them. And then he took their photos and sent them to their father.

A relative of a woman and three children murdered this week in Saskatchewan said their killer took pictures of the bodies and sent copies to the children’s biological father before taking his own life.

Tim Funk, a cousin of Latasha Gosling, said Steve O’Shaughnessy was the woman’s boyfriend and that he was emotionally abusive, controlling and jealous.

Gosling, 27, was separated from her husband, but not officially divorced, and had been with O’Shaughnessy, 23, for the last couple of years, Funk said.

The husband often went to visit his three kids: Jenika 8, Landen, 7, and Janayah, 4. They had been living most recently with Gosling and O’Shaughnessy in a rented mobile home in Tisdale, a town of 3,200 northeast of Saskatoon.

The boyfriend “didn’t like it at all” when the husband came around, Funk said.

On Tuesday, the husband received the gruesome photos in a text sent to his cellphone, said Funk. It was the day before the husband’s birthday.

O’Shaughnessy “sent them to him as a birthday gift.”

Funk said the husband called Mounties, who found the bodies early Wednesday in the mobile home.

RCMP have confirmed that officers received a call from a family member around supper-time Tuesday, saying the woman and children hadn’t been heard from all day and couldn’t be reached.

Officers obtained a search warrant for the trailer and found the four, but have not said how they were killed.

The manager of the mobile home park said he was called by police that night to bring over a spare key. He saw the children’s distraught father there.

Officers tracked a suspect to a home 130 kilometres away in Prince Albert.

Police said the man had taken a six-month-old baby with him from the trailer. He then killed himself, but the infant was unharmed. Funk said the baby is Gosling’s youngest child and O’Shaughnessy was the father.

O’Shaughnessy’s family released a statement Thursday saying he had ongoing struggles with mental health issues, but no history of violence.

“We will likely never know why this senseless act occurred,” said the statement. “The Gosling family does not deserve this.”

Funk has set up a page on the fundraising website gofundme.com to collect money for funerals and build a trust fund for the baby. It had topped $41,000 by Thursday afternoon.

Funk struggles to talk about what his family is going through.

“None of it makes any sense.”

He describes Gosling as a proud mother who took her kids to swimming and dance lessons.

Her sister, Laura Gross, wrote on Facebook about how the three kids would jump on a trampoline and play on swings outside their grandparents’ home.

Landen loved to wrestle with his uncle and sit on the couch playing video games, she said. Jenika was grown up for her age and wanted to look after cousins and change the littlest one’s diapers.

“Janayah, you were my little chipmunk,” said Gross. “Every time you talked, you sounded like one. I loved you for that.”

Tisdale might be best known as the hometown of comedian Brent Butt, who based his popular “Corner Gas” TV show on the community. Butt posted a message on Twitter calling the killings “very tragic and sad. Strange days.”

Local hotel owner Patricia Olson felt sick to her stomach when she heard the news. She said everywhere she went Wednesday, normally outgoing and friendly residents were reserved and quiet.

“There wasn’t a place or a person without tears.”

With files from Chris Purdy in Edmonton