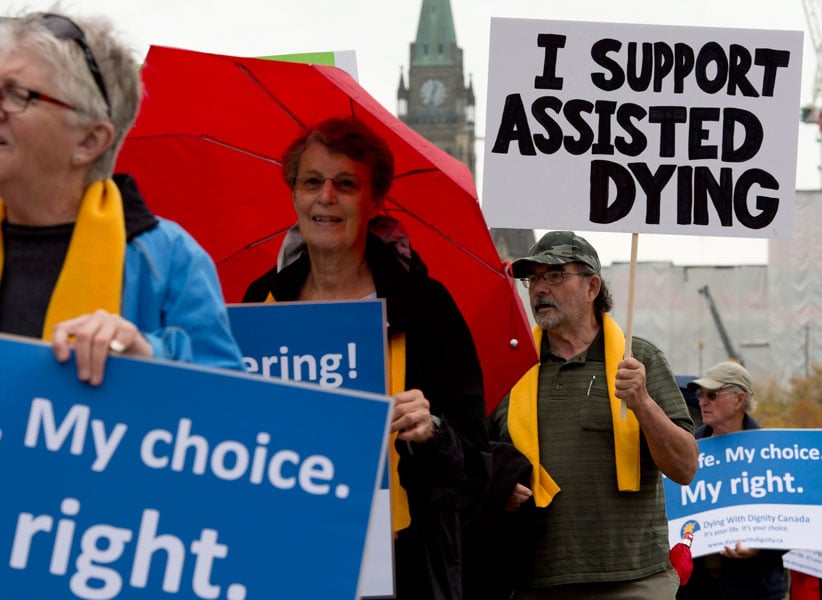 The Supreme Court of Canada has once again handed the Conservative government an unwelcome legal and ethical conundrum, this time by striking down the law that prohibited doctors from helping patients die. The court unanimously ruled today that the section of the Criminal Code that made so-called “physician-assisted death” illegal unjustifiably infringed on the Charter of Rights and Freedoms.

The judges set out limitations, stipulating that doctors could hasten death only “for a competent adult person who (1) clearly consents to the termination of life and (2) has a grievous and irremediable medical condition (including an illness, disease or disability) that causes enduring suffering that is intolerable to the individual.”

Just as it did when it struck down laws against prostitution last year, the court gave the government 12 months to come up with regulations to bring the decision into force. When it comes to end-of-life issues, however, the court noted that provincial governments and doctors groups might also be involved in setting new rules.

Why doctors want the right to pull the plug

In the case of prostitution, the federal government surprised many observers last spring by refusing to liberalize the law, essentially replacing the disallowed old laws that banned activities around prostitution—such as keeping a brothel or bargaining openly to sell sex—with a sweeping new prohibition on buying sex.

On physician-assisted dying, the court allowed broad leeway for governments to impose regulations and guidelines. The ruling makes it clear, for instance, that the doctors who don’t want to help patients die could be allowed, under new rules, to decline as a matter of conscience or religious belief.

“In our view,” the judges wrote, “nothing in the declaration of invalidity that we propose to issue would compel physicians to provide assistance in dying. The declaration simply renders the criminal prohibition invalid.” Working out the details is “in the hands of the physicians’ colleges, Parliament and the provincial legislatures,” the ruling adds.

Among the many fraught issues this case forced the court to wrestle with was: for individuals facing the prospect of long, degenerative sicknesses, does denying them a doctor’s help in committing suicide sometimes lead to them take their own lives earlier, when they were still able to so, without assistance?

The trial judge in the case that was appealed to the top court found that “the prohibition on physician-assisted dying had the effect of forcing some individuals to take their own lives prematurely, for fear that they would be incapable of doing so when they reached the point where suffering was intolerable.”

In its ruling, the Supreme Court found no reason to doubt the trial judge on this troubling point, and in fact the evidence was not challenged. “It is therefore established,” said today’s ruling, “that the prohibition sometimes deprives some individuals of life.”