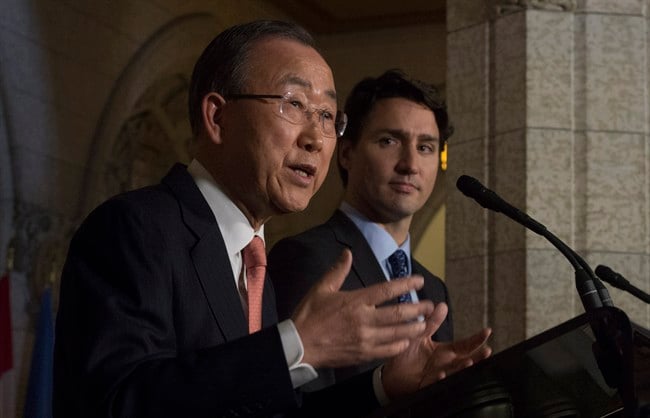 OTTAWA – To hear Ban Ki-Moon tell it, Prime Minister Justin Trudeau’s rapprochement with the United Nations was nothing short of the return of the prodigal son.

But the Conservative opposition says the UN secretary general’s flattery of Canada’s new Liberal prime minister may have had a political motive — getting more support for some UN agencies and programs that the Harper government defunded.

During his visit last week, Ban displayed an unabashed fondness for both the style and substance of Trudeau’s performance as an emerging international statesman.

Ban made it clear on numerous occasions during his two-day trip to Ottawa and Montreal that he was wholeheartedly embracing Trudeau’s call to bring the country “back” to the United Nations.

Conservative deputy foreign affairs critic Peter Kent said Ban’s effusive praise may have been a play for more UN funding for the environment and peacekeeping, as well as for the United Nations Relief and Works Agency, which helps Palestinians.

The Conservatives cut UNRWA funding because they alleged it had ties to Hamas, which Canada lists as a terrorist organization. UNRWA has denied the charges.

“It does seem clear he was trolling for new UNRWA funding,” Kent said Monday.

“He may have asked that Canada re-engage with some of the UN committees and agencies that our government left because they were unworthy of time or money.”

“The channel of communication is opened,” she told CTV’s Question Period on Sunday. “We’re evaluating the situation. And the decision will be taken shortly.”

Kent said the opposition will be looking for more specifics from the Liberals in the coming days.

Roy Rempel, an ex-defence adviser in former prime minister Stephen Harper’s office, said he believes Ban intentionally used Trudeau’s “we’re back” slogan as a way of “positioning himself to be able to ask for more from Canada going forward.”

“Last I checked, our mission in New York was still there and we were still one of the top 10 contributors to the UN budget,” he said. “That was the case under the Harper government, and I presume it will remain so under the new government.”

Ban declined an interview while he was in Ottawa.

But during his visit, he suggested that his admiration for Canada’s new leader was rooted in his own childhood experiences in war-torn Korea.

In addition to praising Canada for taking a leadership role at the Paris climate change talks late last year, Ban repeatedly thanked Trudeau for his decision to admit 25,000 Syrian refugees.

Ban recalled fleeing his own burning village in South Korea when he was six years old in 1950. It was the start of the Korean War.

“Many brave Canadian soldiers came to Korea, and there were a lot of sacrifices, but on the basis of these sacrifices of Canadians and United Nations peacekeepers, Korea was saved from aggression,” Ban told high school students at Ottawa’s Glebe Collegiate.

“That’s why I’m standing before you as the secretary general.”

Ban said when he travels the world meeting refugees and displaced people he feels a personal connection to them.

“I will tell them the same story: I was you. Do not despair.”

Ban also gave hearty endorsements to Trudeau’s policies on refugees, the environment and something else — his decision to make himself his own minister of youth, something no other world leader had done, Ban said.

Ban told the high school crowd that half the world is under age 25, and that they were among its largest and most influential demographic.

“Raise your voice. You may challenge your prime minister, your minister, your principal, your teachers,” Ban said, seated next to Trudeau. “Tell them . . . this is my world; make this world better for us. This is your prerogative right.”