Tories twice rejected change that could have opened doors for refugees 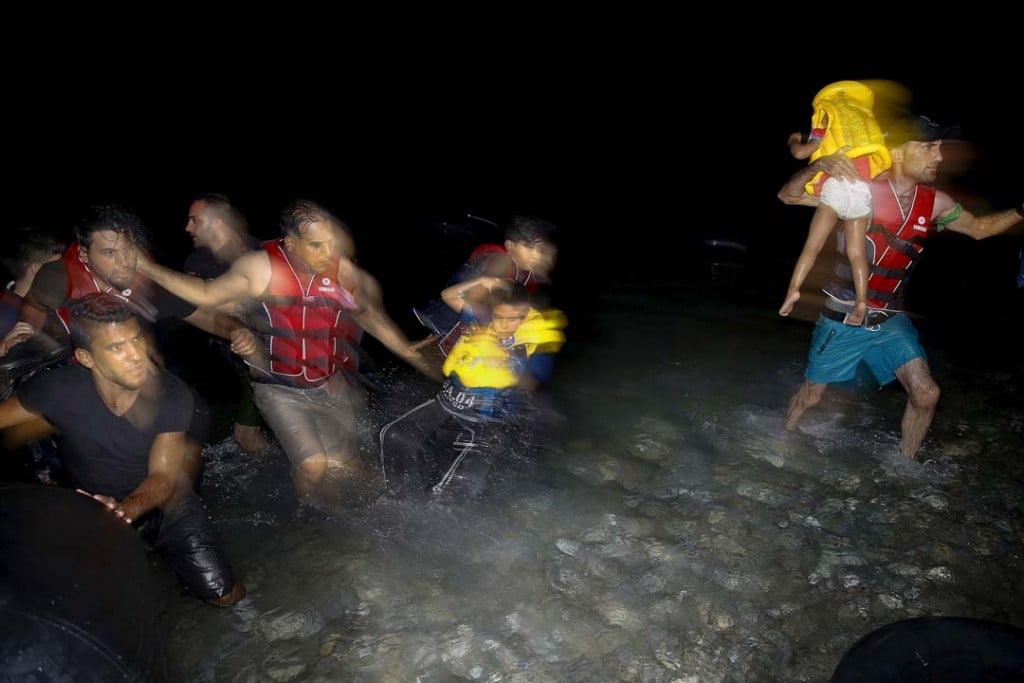 Syrian refugees carry their children as they jump off a dinghy overcrowded with Syrian refugees upon arriving on a beach on the Greek island of Kos, after crossing a part of the Aegean sea from Turkey, August 9, 2015. United Nations refugee agency (UNHCR) called on Greece to take control of the “total chaos” on Mediterranean islands, where thousands of migrants have landed. About 124,000 have arrived this year by sea, many via Turkey, according to Vincent Cochetel, UNHCR director for Europe. (Yannis Behrakis/Reuters)

Twice in 2015—first in March, then again in July as the refugee crisis escalated—federal bureaucrats proposed exempting Syrians and Iraqis from a rule requiring them to have official UN refugee status in order to be sponsored by small groups of people to come to Canada.

On both occasions, the recommendation as described in documents obtained by The Canadian Press under the Access to Information Act was rejected by then-immigration minister Chris Alexander.

The Conservatives eventually agreed to the change, but not until September, when the original policy became linked to the story of Alan Kurdi – the three-year-old Syrian boy whose tragic drowning galvanized global sympathy for the Syrian refugee crisis.

A memo, entitled “Public policy to facilitate the sponsorship of Syrian and Iraqi refugees by groups of five and community sponsors,” was first sent to Alexander on March 17, 2015.

The issue was a 2012 rule change put in place by the Conservatives that made it nearly impossible for informal groups without sponsorship agreements with the government to bring refugees to Canada.

As a result, such so-called “groups of five” could only sponsor people who carried an official refugee designation the United Nations or the host country.

Applications from non-registered refugees were harder to vet and took longer, gumming up the sponsorship system, according to government materials published at the time, which is partly why the change was made.

But the Tories also didn’t like that the program had become a means of family reunification and feared those applications were pushing out people in more dire need of resettlement, said a source close to the decision process at the time.

The result was a steep drop in the number of applications that had previously brought upwards of 2,000 people to Canada each year.

In 2015, the Kurdi family was trying to make just such an application – indeed, they wrote to Alexander on the very day the minister received the March 17 memo.

In their letter, the family outlined how it was trying to get Alan Kurdi’s uncle and his family out of Turkey, but could not since they had not registered as refugees by either the UN or the Turkish government. Canadian requirements were slowing things down, they wrote.

Alexander would not see that letter for another few months.

He chose not to approve the policy because he wanted to make things faster – and was running up against politics, said the source, who spoke on condition of anonymity because the details had not been previously disclosed.

At the time the memo was written, the government had only just belatedly reached its original 2013 target of bringing 1,300 Syrians to Canada in the space of a year.

Alexander had already promised that January to admit a further 10,000 refugees – a promise that took more than a year to get cleared by the Prime Minister’s Office.

The memo pointed out how instrumental groups of five were in meeting previous refugee settlement commitments and that they continued to express interest in sponsorship, often being referred to the formal sponsorship groups instead, who had more latitude in selecting refugees.

Alexander had some power, it noted.

“Section 25.2 authorizes the minister of (immigration) to grant permanent resident status, or an exemption from any criteria or obligations of (the Immigration and Refugee Protection Act), based on public policy considerations,” it said.

The Conservative promise to resettle 10,000 refugees came with a catch, however – they had to meet at least one of a specific list of criteria, like being a member of a vulnerable minority or survivor of sexual violence. Screening non-official refugees against that list would be difficult, and only slow things down.

Two audits of the process, prompted by a Prime Minister’s Office wary of who was coming in, slowed things down even more.

By July, millions of Syrians were on the move and officials sent Alexander another memo, reiterating their March proposal – an unusual show of persistence, considering a federal election was looming and officials had been told to propose no new policy ideas.

Any idea that wasn’t likely to play well with the Conservative voter base had no chance of making it through the Prime Minister’s Office, said the source.

Instead, on Aug. 10, 2015, and with the federal campaign in full swing, the Tories promised to admit 10,000 more Syrians and Iraqis over four years, if re-elected.

Less than a month later, Kurdi’s lifeless body washed ashore on the beach of a Turkish resort; the heart-rending photos were splashed on newspaper front pages around the world.

The public reaction was immediate, its message unmistakable: Syrians being forced to flee their own country and those around it needed help, and now.

On Sept. 19, a notice would appear on the Immigration Department’s website, a carbon copy of which had been in Alexander’s briefing note that past March and again in July.

This one, however, bore Alexander’s signature.

It established “sufficient public policy considerations” warranting an exemption from the rule for “for Iraqi and Syrian nationals who have fled their country of nationality or habitual residence as a result of the current conflicts in Syria and Iraq, in order to facilitate the sponsorship of these persons by groups of five and community sponsors.”

But the challenges in processing the paperwork clearly remain. Since September, over 30,000 Syrians have arrived in Canada. By May, only 195 came under the groups of five program, which the Liberals announced late last week they would extend.