Toronto's traffic time bomb: Is it too late to fix?

The impact of the Pan Am Games is real, even if local interest is low. Can Toronto's roads handle an event nearly three times bigger than the Winter Olympics? 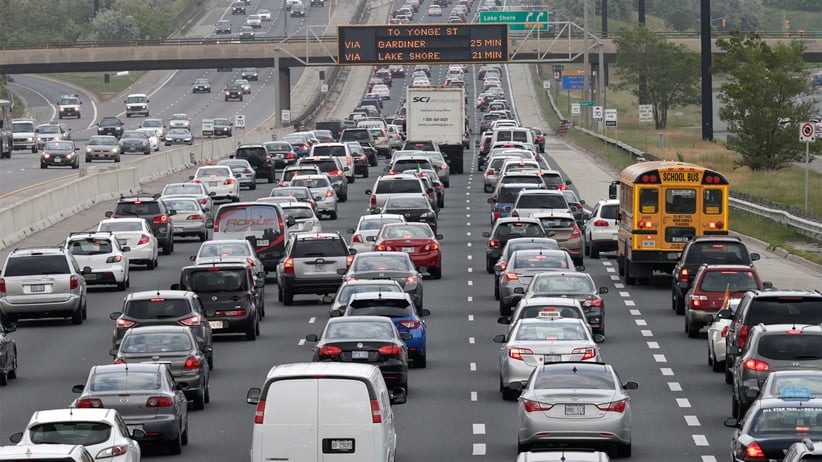 Traffic congestion on the Gardiner Expressway

Vancouver is a city that got a lot right in its planning, as if its founders played Sim City by Jane Jacobs’s rules. It’s surrounded by green spaces, has a walkable downtown that encourages a fit citizenry, and its residents have an inexplicable, internally driven zeal for recycling. Sure, it’s not perfect—the city is still divided by strips of grinding poverty—but credit where credit is due: it’s got a lot of urban-planning factors figured out. But just like so many burgeoning megacities, it is hardly known for its quick, smooth commutes.

That’s why when the Winter Olympics came to town, it spurred a decade of significant transit investment, including a whole new rapid transit line that opened in 2009, which  connected downtown Vancouver to Richmond, as well as the airport. And rightly so: The 2010 Winter Olympics, according to reports, brought in 650,000 tourists from around the world and billions in related dollars; the city needed infrastructure investment to support the crush of people coming.

Yet there is not quite the same level of urgency in the preparations for the 2015 Pan Am Games, which will be hosted by Toronto in July. The Pan Am Games money has produced sparkling new arenas, new housing on Toronto’s east side, refurbishment of York University’s athletic facilities—and, on an unrelated note, a tunnel nearby—but very little in the way of actual money spent in making sure people can get around, and little concern for the impact of the games on the city.

Related: The new builds in store for the Pan Am Games

Maybe it’s the lack of genuine understanding about the nature of the Pan Am Games; maybe it’s the fact that their profile is definitively lower than the more glitzy Olympics. But whatever the case, Torontonians who aren’t worried about what the summer will bring are being hopelessly naive. Here’s one surprising fact: For all the years of planning to handle the influx of 2,566 athletes in Vancouver in 2010, the Pan Am Games will play host to more than 7,000. That’s almost three times as many athletes—and three times as many trainers and family members, plus media and officials—clogging the already creaky infrastructure of Canada’s most populous city. The Pan Am Games aren’t the Olympics, but the number of people they’ll bring in will still be quite the haul: an estimated 250,000 visitors. And so Toronto is facing a time bomb of traffic delays—in the high heat of smoggy summer.

That’s where governments should step in, right? Well, not so much for Ontario’s transportation minister, Steven Del Duca. On Tuesday, Del Duca revealed his bold plan to handle the crowded commutes, a plan that can effectively be summed up like this: We hope things sort of figure themselves out. Well, not even quite that—the hope, apparently, is that Del Duca’s request will make 20 per cent of drivers stay off the roads, without truly proffering a ton of alternative options, or that Torontonians will be so dissuaded by the ensuing crushing commutes that one-fifth of them will simply stay away. And that’s the thing: A 20 per cent reduction in cars on the road isn’t just a wish that will help the commute plan. It is a fundamental plank. “I am confident we will make it happen here,” he said, allegedly with a look that implied he was serious. About a week later, Pan Am Games CEO Saad Rafi doubled down on his statement in Toronto Life: “We’ll encourage people to work from home.”

That plan includes the only roadway changes that the infrastructure spending will meaningfully contribute: 770 kilometres of temporary high-occupancy lanes in and around Toronto. Problem is, the lanes’ users must meet an unrealistic standard: three or more must be in each vehicle to use those lanes, an increase by one from Toronto’s pre-existing HOV lanes, which are on their own often unused even in rush-hour crushes on Highway 401. “Two is a stretch, three is definitely way out in the outfield,” said Murtaza Haider, associate professor at the Ted Rogers School of Management at Ryerson University in an interview. “It reduces the capacity of the existing road system rather than adding to it.”

This would all be fine, perhaps, if Toronto’s public transit system was effective. But the Toronto Transit Commission isn’t so much a streamlined speed demon but rather a tangled mess that can be waylaid easily (by, say, leaking ectoplasm, as it was in one morning rush hour, or a complete system failure from a dead battery) and whose emergency strategies are half-measures (buses that take you most of the way to your intended destination). It’s a city that still relies on lane-stultifying streetcars as a major transit pillar; it’s inconsistent and—perhaps even more so for the Pan-Am areas that are more far-flung from downtown—inconvenient. The TTC may bill itself as the Better Way—but that’s only true if you don’t have any other options.

The idea that Toronto drivers will simply give up their cars in exchange for a slight increase in TTC service and HOV lanes is preposterous, and reducing road access is along the lines of what the London Summer Olympics did in 2012—and that’s a cautionary tale, for Haider. “I don’t know why people think London did a good job. If you look at the coverage, people were delayed by more than two hours on day one of the Olympics. You really have to go back and see what happens when you reduce capacity,” he said.

And we don’t have to look any further than Olympic-blessed Vancouver as a perfect example of how firmly drivers will cling to their cars, even in the face of tough commutes and significant investment into public transit, something that won’t even be meaningfully available in Toronto. According to the Vancouver Sun, the number of commuters went up to 70.8 per cent in Vancouver, despite some of the worst travel times in the country. Last year, a study even called Vancouver the most congested city in Canada. Don’t forget, too, that Toronto’s wildly popular, if wildly controversial, Rob Ford reign was built in many ways by tapping into the belief that there was an ongoing war against the car—and that cling-to-your-car attitude is pervasive. “The plan appears to be relying more on wishful thinking than on good effective planning,” said Haider.

It’s not too late, though, to defuse this time bomb, says Haider. If he had his way, he’d get the provincial government to pick up the bill of the privately owned pay-to-drive Highway 407, as well as subsidized Go Transit service, two options that could offer relief at this late juncture. But Torontonians may not know what they’re getting into—certainly not that, for instance, the number of participating athletes will triple the much grander Vancouver Olympics. But with Ontario’s current transit plan, announced with just over three months left and pinning its hopes on fantasy, Toronto is on a slow-moving collision course this coming summer. So let the games begin—but build in some late start times.