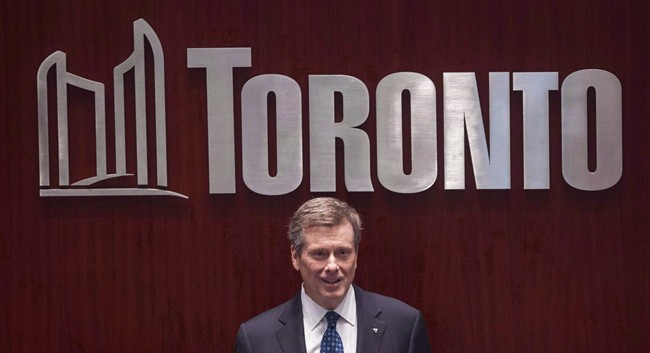 TORONTO – The mayor of Toronto says the city now has sports facilities to host international competitions that could previously only be held in Vancouver, leaving the door open for a possible future Olympic bid.

The city is currently hosting the Pan Am Games, which wrap up Sunday, and Mayor John Tory said Wednesday that the event has put Toronto on the global map for athletic events.

“There’s a whole variety of international events and sporting competitions that we’re now in a position to host, which I think is good for Toronto, good for Ontario and good for Canada, and the Olympics is one of those, obviously, about which there’s a great discussion,” Tory said.

Afterward, he said, officials will “sit down and talk about these things together as we will and decide what’s best in terms of what we go forward with, whether it’s an Olympic bid or a host of other things one could go forward with.”

“I guess everything’s on the table until you take it off the table,” he said.

Related: Our coverage of the Pan Am Games

Cities looking to host the 2024 Summer Olympics have until Sept. 15 to submit a letter of application to the International Olympic Committee. Those deemed viable applicants then have until early 2016 to turn in their bid concept.

The committee will evaluate those concepts and choose a number of official candidate cities, which will be examined by a commission of experts before the winning city is be chosen in the summer of 2017.

Toronto has made several failed bids for the Olympic Games, most recently when it lost to Beijing for the 2008 Summer Games.

There is a precedent for a city hosting the Pan Am and the Olympic Games in close succession. Rio de Janeiro hosted the Pan Am Games in 2007 and is set to welcome the Summer Olympics next year.

John Furlong, who led the bid and the organizing committee for the 2010 Vancouver Olympics, said there’s no doubt Toronto has the infrastructure and the organizational skills to host a large sporting event such as the Olympics.

“Of course they can, they’re doing it right now,” he said.