Rev. Brent Hawkes is considered one of the spiritual leaders of Toronto's gay community 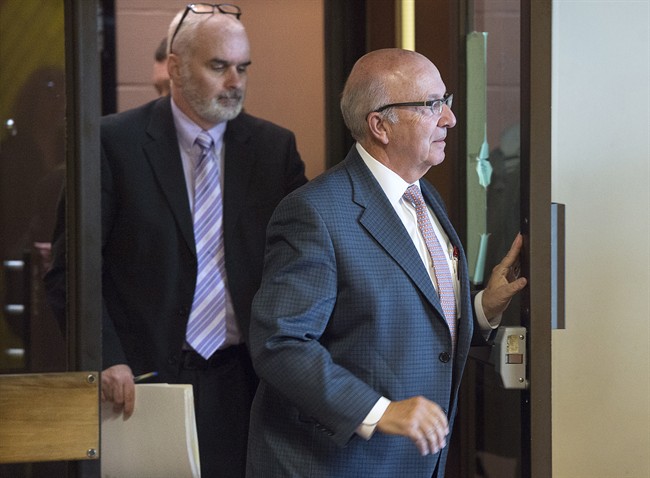 Nova Scotia Crown attorney Robert Morrison, left, and Joel Pink, representing Rev. Brent Hawkes, the senior pastor at the Metropolitan Community Church of Toronto, head from provincial court in Kentville, N.S. on Monday, April 11, 2016. Hawkes is accused of indecent assault and gross indecency related to allegations of a sexual assault back in the 1970s. (Andrew Vaughan/CP)

KENTVILLE, N.S. – Prominent Toronto pastor Brent Hawkes pleaded not guilty Monday to decades-old sex-crime allegations in Nova Scotia, where supporters gathered outside a Kentville courtroom to denounce the charges as outdated and unfair.

Hawkes, 65, is accused of indecent assault on a male and gross indecency related to allegations of a sexual assault against a minor in 1974 and 1975.

The alleged victim was 15 and 16 years old at the time, Nova Scotia’s Public Prosecution Service said. Few other details have been released about the case.

The accused did not appear in provincial court Monday. Halifax lawyer Joel Pink appeared on behalf of Hawkes’ Toronto lawyer, Clayton Ruby. Pink declined to comment after the proceedings, as did Ruby.

Hawkes, a well-known gay rights advocate who officiated at former NDP leader Jack Layton’s state funeral in 2014, has maintained his innocence and says he will fight the accusations.

He issued a statement Feb. 1, saying: “I want to be crystal clear: I am innocent of these allegations … The purported events simply did not take place. I will fight, with all that I have, these accusations.”

According to the “Support Brent” website, Hawkes attended Mount Allison University in Sackville, N.B., and later moved to Nova Scotia’s Annapolis Valley from 1973 to 1976.

None of the allegations has been proven in court.

Outside the courtroom, Hawkes supporter Kim Vance said the charges were part of the Criminal Code in the 1970s.

“We were quite astonished to see these charges come forward,” said Vance, national co-chairwoman of the Brent Hawkes Support Fund.

“We’re standing by him and we’re advocating strongly that these archaic and outdated laws have no place in the current legal system in Canada … Those provisions of the Criminal Code have been found to be discriminatory.”

The two provisions of the code were substantially overhauled by Parliament in 1983 when a new offence, sexual assault, was enacted.

However, under Canadian law, since the alleged offences happened in the mid-1970s, the charges must be based on the earlier version of the code.

Inside the court, not guilty pleas were entered on the charges and trial dates set for seven days starting Nov. 14. Hawkes has also chosen to be tried by judge alone in provincial court, which means there will be no preliminary inquiry.

Hawkes, originally from Bath, N.B., has been the senior pastor at the Metropolitan Community Church of Toronto for 38 years. Considered one of the spiritual leaders of Toronto’s gay community, he is also known as a vocal proponent of same-sex marriage, and in 2007 was appointed to the Order of Canada.