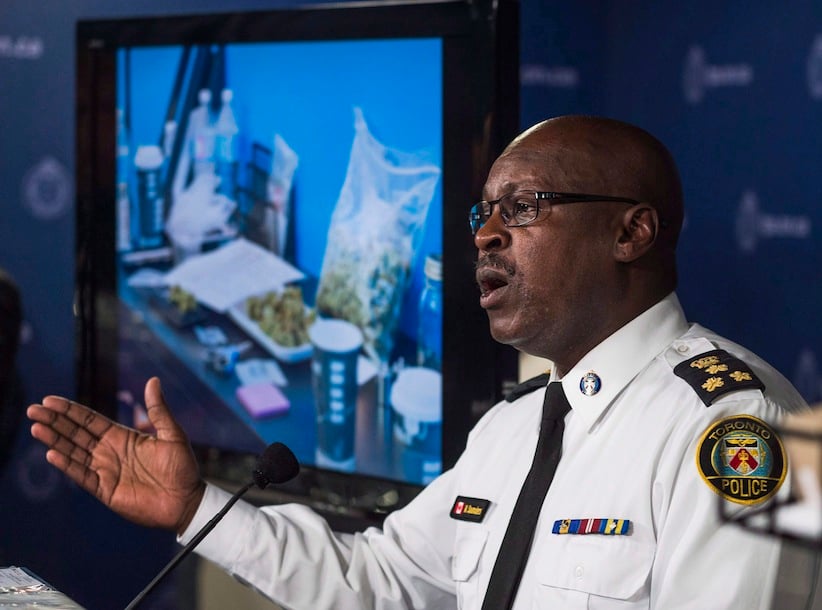 TORONTO – Toronto’s police chief is set to apologize for raids on local bathhouses that explicitly targeted the city’s gay community more than three decades ago.

Const. Allyson Douglas-Cook says Mark Saunders plans to deliver the apology on Wednesday, but did not have further details.

Douglas-Cook says Saunders will directly tackle a series of raids that took place in 1981, in which officers barged into four bathhouses and rounded up the people inside.

Nearly 300 people were arrested and charged with owning or being found in a common bawdy house.

More than 90 per cent of the charges were dropped in years to come, and the raids galvanized Toronto’s LGBTQ community to fight for their rights and find a political voice.

Observers say Saunders’s apology is a necessary acknowledgment of the fact that the bathhouse raids ruined countless lives.

Trevor Hart, LGBTQ health researcher and Director of Ryerson University’s HIV Prevention Lab, said the raids were devastating at a time when the rights of gay men were rarely discussed or understood.

The police incursion into a private space resulted in names and photos of closeted men being splashed across the media, leading to lost jobs, damaged relationships and a sense of broader betrayal, Hart said.

“Telling people that there’s no safe place for them has drastic, horrible effects on people’s mental health and well-being,” he said in a telephone interview. “. . . There’s a sense that ‘something is wrong with me. People will punish me. I can’t do anything about it, and I will suffer.'”

The 1981 raids took place on February 5 when about a hundred officers converged on four separate bathhouses in co-ordinated raids.

At 11 P.M. officers used fists and crowbars to enter the Romans II Health and Recreation Spa, Club Toronto, the Richmond Street Health Emporium and the Barracks, all of which had been operating for months or years before the raids.

Newspaper accounts at the time describe police barging into private rooms and dragging occupants into communal lobbies or police cars, sometimes draped only in towels.

In the following months, Hart said public figures such as Canadian literary luminary Margaret Atwood and then member of Parliament Sven Robinson also began to speak out in support of Toronto’s gay community.

Hart said the relationship between police and the city’s LGBTQ residents is no longer nearly as antagonistic.

He commended Saunders for making an apology, even if it is coming too late, but said police need to remain vigilant in combating hate crimes that are still committed on a regular basis.

Hart also hopes the apology will touch on other instances of LGBTQ persecution in Toronto’s history, namely a raid on the gay-friendly “Body Politic” newspaper that resulted in the seizure of lists of subscribers and advertisers.

Public ire over the years has also singled out a second raid on Club Toronto, this time at a women’s only bathhouse event. The 2000 raid, which saw male officers barging in on many naked women, was purportedly in response to liquor licensing violations.

Hart said he hopes Saunders’s conciliatory words are accompanied by pledges of ongoing support and reassurance that Toronto has become a safer place than it was in 1981.

“Mark Saunders actually making a public apology on behalf of Toronto police won’t change what happened, but we hope will contribute to an environment of safety that will help people to have a sense of comfort and decreased social isolation.”