Who built chamber, and why? Police 'open to anything right now'

Nothing criminal suggested about underground Toronto bunker, but intent unknown 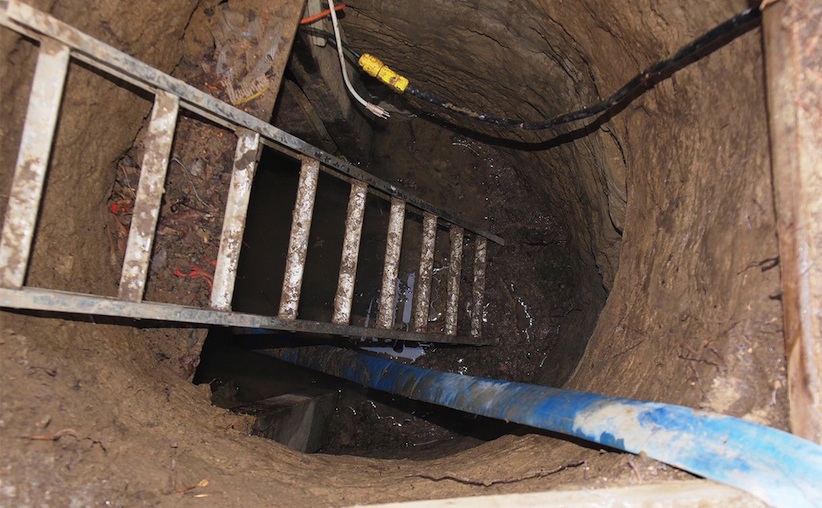 TORONTO — “If you built a tunnel near Rexall Centre in Toronto give us a call, k?”

The tweet from a Toronto police officer followed a call from authorities for the public’s help in solving the mystery of an underground chamber discovered last month near a Pan Am Games venue.

The bunker, discovered in January by a conservation officer in a densely wooded area, is located 25 metres from the fence of the Rexall Centre, which is to host tennis events for the summer’s Pan Am Games.

But while the investigation is still ongoing, police emphasized that the structure wasn’t currently thought to pose a public safety threat.

“I don’t have any evidence that suggests criminality at this point,” said Deputy Chief Mark Saunders. “But bear in mind I don’t have the intent behind this at this point, that could change. I’m open to anything right now.”

In the absence of such evidence, he said, “there’s no criminal offence for digging a hole.”

Calling the discovery of the bunker “not your every day find,” Saunders said police would continue to investigate until they discovered who built it.

Other authorities — including national and international security agencies — have been notified, Saunders said, but the investigation currently remains in the hands of Toronto police.

“In light of today’s present circumstances, anything that we don’t have an answer to, we want to fully explore, we want to get the answers and if it compromises public safety, we have a concern,” he said. “So until we get what the intent is behind this, we’re going to continue to investigate.”

The police probe so far has determined that the chamber was used at some point during the winter. However, Saunders said it’s more likely the tunnel was built in the summer or fall, when the dense foliage in the area would have kept the operation out of sight.

Those responsible for building it clearly had some level of expertise in ensuring its structural integrity, Saunders said. Police believe a bucket pulley system was used to haul the dirt out of the chamber before it was carried away by wheelbarrow and dumped in a nearby pile.

“Whoever decided to build this took quite a bit of time,” he added.

They also found a rosary with a Remembrance Day poppy nailed on to a wall in the chamber and food and beverage containers.

The chamber measures two metres in height, 71 centimetres in width and 10 metres in length.

It’s unclear whether the bunker was finished or if whoever built it intended to continue, Supt. Bryce Evans of the Specialized Criminal Investigations Unit said.

Evans said he believes it to be the work of more than one person.

“In my personal experience, it would be a lot for one person to do by themselves because if they start getting the pulley, bringing the buckets up, you gotta load the buckets full of dirt, so it would really be a manual task for one person,” he said.

“They had to do this manually, and going 33 feet in the distance and the height and then getting the material there and then building support walls and building the tops on top — there’s more. It’s not just a week’s job.”

A Toronto construction company estimated it would take months to complete such a job by hand, even with several people involved.

Jeff Chomyn, project manager at MGI Construction Corp., said the soil near York University is clay or silt, which is time consuming to dig out but “relatively safe” in terms of avoiding cave-ins.

“It would take someone to dig and one person would have to be moving the material out of the way consistently or else it would take one person a year,” Chomyn said.

“I’d say it’s four or five people in my opinion.”

Police are working to see if they can trace the generator, which they said was hidden in a separate hole about nine metres from the chamber and connected through wiring buried underground.

They said it appears the wood used to brace the walls may have been taken from temporary bleachers set up at the Rexall Centre for last summer’s Rogers Cup tennis competition.

The discovery of what has become known as “the mystery tunnel” is already making international headlines, while many took to social media to offer theories about the possible motives, that ranged from zombie hideouts to affordable housing.

“That tunnel they just found sold for 450k. The Toronto real estate market is that hot” one tweet read.