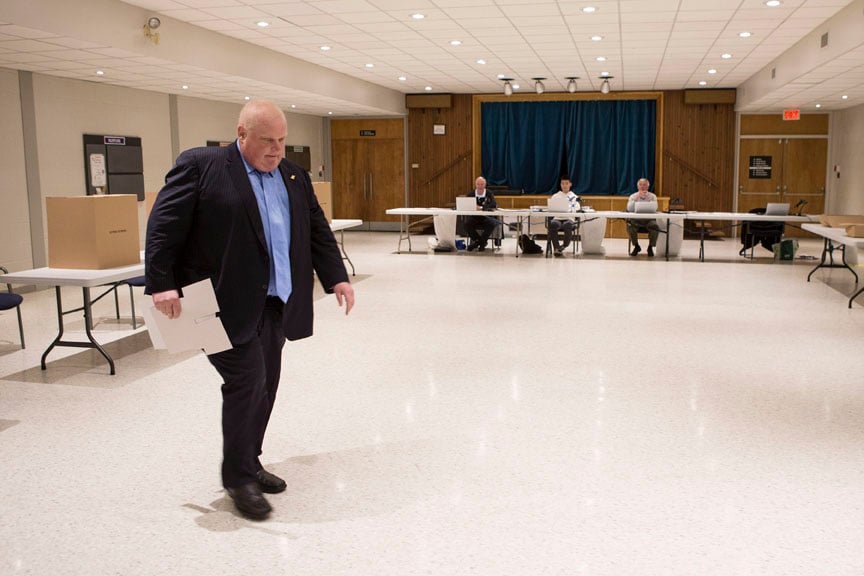 TORONTO – Millions of people were casting ballots in civic elections across Ontario on Monday but most eyes were on the mayoral vote in the country’s largest city thanks to its outgoing incumbent, Rob Ford.

Even though cancer forced the disgraced, scandal-plagued mayor from the race for Toronto’s top job, Ford was still running for election as a councillor in his west-end ward, leaving his brother, Coun. Doug Ford, as a candidate to replace him.

Ford’s admissions of smoking crack cocaine in a drunken stupor, his profanities and offensive behaviour garnered national and international headlines. The antics also made him the butt of late-night television jokes and the pending end of his reign at city hall did not go unnoticed in the comedy realm.

TV host John Oliver lamented the end of Ford as mayor, but found solace in the possibility his brother might replace him.

“Look, Toronto: I think I speak on behalf of the rest of the world when I deliver you this message,” Oliver said in a recent segment.

“Please, please elect this man. I beg you.”

Ford, who is returning to hospital for another round of tests on Wednesday, spent much of the day stumping for votes in his ward. The ailing mayor predicted his older brother would take the mayoral race by a comfortable margin.

In all, 65 candidates were hoping to succeed Ford as mayor, but polls suggested the winner would most likely come from a trio of front-runners, former Ontario Progressive Conservative leader John Tory, former New Democrat MP Olivia Chow, and Doug Ford.

Tory, 60, campaigned on the promise of a new era of co-operation and consultation after the divisive Ford years. The former CFL chairman and senior telecommunications executive has pledged a return to stability and civility at city hall — something polls suggested many in the city would welcome.

Chow, 57, widow of the late federal NDP leader Jack Layton, began the race as perceived front-runner and campaigned as the “only progressive” candidate. However, polls suggested she failed to capitalize on her initial popularity and would fall victim to strategic voting from those seeking to ensure the end of the Ford era.

“So many people, they’ve just had it with Rob Ford — it’s the anti-vote…for anybody but Rob or Doug Ford because they’ve just taken the city so many steps backward,” said city resident, Jon Arnold.

“If we’re going to be a serious major-league city, we can’t have a guy like that in office.”

Doug Ford, 49, who only joined council four years ago, tried to cast himself as the natural successor to his brother — while also distancing himself from the excesses.

Myer Siemiatycki, a political science professor at Ryerson University, said a Ford win would lead to a “befuddlement” among Toronto watchers.

“There’ll be a heckuva lot of head-scratching and maybe some guffawing around the world,” Siemiatycki said.

A Tory win, on the other hand, would create a sense of city returning to political normalcy, he said.

About 1.6 million city residents were eligible to vote at 1,679 polling stations that were to remain open until 8 p.m. Eastern, with results known within about 30 minutes given the use of electronic tabulating machines.

While the race to replace the infamous Ford was drawing the most attention, Toronto isn’t the only city replacing a controversial incumbent.

Voters in London were choosing a successor to Joe Fontana, who resigned as mayor this summer after he was convicted of government fraud for forging a check while he was a Liberal MP.

In Brampton, a spending scandal could affect Mayor Susan Fennell’s tenure after an audit found more than $172,000 dollars in expenses that breached city policies — though some $41,000 was repaid, and a forensic audit later concluded that Fennell owed just $3,500.

In northern Ontario, many residents of Elliot Lake were wondering whether fallout from the deadly collapse of a shopping mall roof in June 2012 would influence the outcome of the election there.

A report released last week found municipal officials — including the incumbent Mayor Rick Hamilton — turned a blind eye to worsening conditions at the Algo Centre Mall before the roof caved in, killing two women and injuring 19 others.