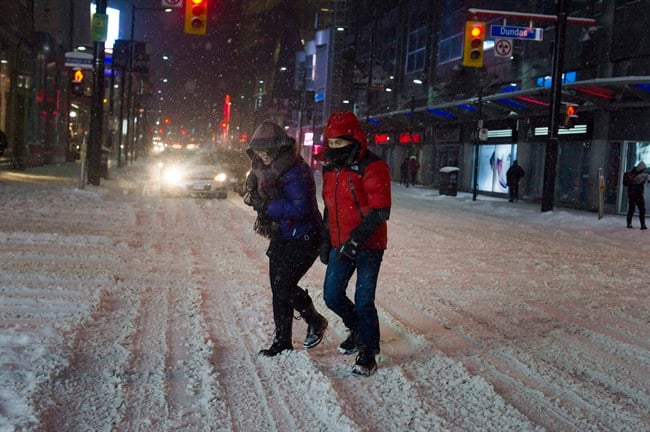 A couple is seen traversing the Yonge and Dundas intersection during a snow storm in Toronto in a March 1, 2016, file photo. (Christopher Katsarov/CP)

TORONTO – As the number of pedestrian deaths continues to climb in Canada’s most populous city, politicians and police are trying to address the issue.

So far this year, 42 pedestrians have died in Toronto, making 2016 the deadliest on record since 2002, when 50 pedestrians died.

The trend has prompted Mayor John Tory and the city’s police force to consider measures such as lowering speed limits, putting up better road signs and launching an education campaign next year.

“I did a case about 10 to 15 years ago … A young man going home to take his kids out for Halloween. And a truck turned two lanes over, made a right turn in front of him and killed him,” he said.

Since then, he’s seen a pattern of more people being killed and seriously injured.

“And you know these things are preventable, and you ask yourself, ‘Why isn’t more being done by the government or the police or the courts?'”

Kasia Briegmann-Samson has been asking the same question since 2012, when her husband, Tom Samson, was killed in a hit-and-run while riding his bike.

“You constantly want to scream, ‘Don’t you care? Isn’t there something that can be done?'” she said. “And the answer is always ‘Well, no. This is the end of the road. This is as far as we can go. This is as much as we can investigate.’ After a while, you stop being surprised by that. There’s only so much energy you can pour into that.”

The issue of pedestrian death in Toronto has been making headlines in recent weeks and Briegmann-Samson hopes something good will come out of it.

Brown says the issue of pedestrian safety will only become more pressing as the city grows.

“Inside the city core, you’re having a larger portion of the population choosing to walk or ride a bike,” he said. “And they’re scared as hell; they don’t want to die on our roads.”

Along with the concern, there has been public outrage. Brown noted that drivers who kill pedestrians often face negligible punishment.

Erica Stark, a mother of three, was fatally hit by a car in 2014, when she was standing on the sidewalk. The driver was reportedly punished last week — she’ll have to pay a fine of $1,000. She is also facing six months of probation as well as six months of driving restrictions.

In the wake of cases like that, advocates say there are a few things that policy-makers and everyday people can do to prevent cases like Stark’s and Samson’s.

Brown said “vulnerable road user laws” should be put in place, so that drivers face increased penalties when pedestrians and cyclists are struck. Toronto city council requested in 2015 that Ontario’s legislature craft such laws, but that hasn’t happened.

Ontario Transportation Minister Steven Del Duca says a number of safety measures have been brought in to protect pedestrians and cyclists, but he says more must be done.

He noted that the provincial government recently introduced an act that would, if passed, allow municipalities to bring in measures that include reducing speed limits in community safety and school zones.

“I have directed Ministry staff to work with our road safety partners to find practical solutions and strong action that we can take to prevent these incidents from happening on our roads. I hope to have more to say on this front in the New Year.”

But before policies and legislation are introduced, there are a number of things individuals can do to protect pedestrians, said Const. Clinton Stibbe of the Toronto police.

Drivers should take time to go over rules of the road, he said, especially given that in Toronto, nearly two-thirds of pedestrians are killed by drivers making improper turns.

And motorists should also drive more slowly, because speed is a factor in most fatal crashes, he said.

Stibbe noted that 82 per cent of the pedestrians who have been killed in Toronto so far this year are aged 55 or older.

As the population continues to age, more changes will need to be made, he said. People will need to be more aware of older pedestrians who take longer to cross roads, and improvements like longer traffic signals must be put in place to accommodate seniors.