Jalal Faghihi watched in horror as the driver struck six people—initially fearing one of the victims could be his wife. He's one of numerous eyewitnesses police want to hear from in the coming days. 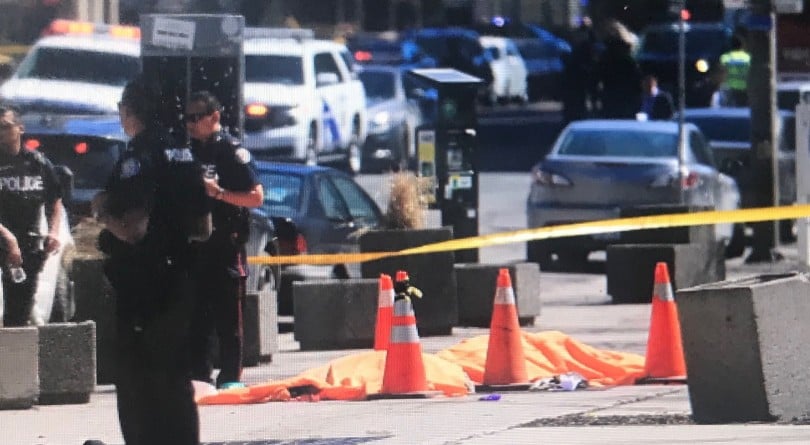 TORONTO, ON - APRIL 23: Van strikes as many as 10 pedestrians at Yonge and Finch (Rene Johnston/Toronto Star via Getty Images)

On Monday afternoon, a van ran down dozens of pedestrians on Toronto’s bustling Yonge Street, killing 10 and injuring 15. The following are eyewitness accounts from those who saw the horror as it unfolded.

At 12:45 p.m., the Uber driver received a spontaneous phone call from his wife Nisha. They agreed to meet near Yonge Street and Sheppard Avenue, and from there they’d go for dinner at a nearby Iranian restaurant. It was an otherwise normal afternoon—right down to the long-awaited spring temperatures. He was sitting in his black Dodge Caravan at Pearson International Airport, where as ride-share driver he finds himself at least once or twice a day.

I was driving northbound and had just past Sheppard. Suddenly, I saw a white van going south in the other lane. It was a Ryder rental car. I saw it turn into the sidewalk, hitting two people. I thought to myself, ‘why is this guy doing that?’ Then I pulled over and parked my car. I saw two people injured; one of them, a man, had a completely bloody face but he was walking, the other one was laying down. I couldn’t tell if the person was a man or woman.

The car was swerving on the road. It hit a street sign and lost its bumper. After it hit the two people, it pulled back onto the road and did the same thing on another part of the sidewalk. It was doing a zig-zag. Hit and go, hit and go, it didn’t stop. He just kept going. There was a lot of noise. My window was down—people were screaming. It was unbelievable, but some people have mental problems and want to do something crazy, or maybe it was some terrorist organization wanting to cause chaos.

After Faghihi pulled over, he got out of his car and started walking towards the scene.

I pulled over for my wife—I thought maybe my wife was here. I started walking towards the corner of the street [where two people got struck by the van]. I crossed the street, and I could see, very clearly, the van hit four more people down the street. It kept going and almost immediately police were chasing. The driver of the van was white, it looked like his hair was receding and he was wearing sunglasses. There were not many people in the area. It’s usually busy, but at the time there weren’t a lot. The firefighters arrived at the scene first, then police and then ambulances.

By this point Faghihi was overwhelmed by worry for Nisha.

She was coming from work downtown. I called her 10 or 12 times, but she wasn’t answering the phone. I went to a police officer and asked if he had any information for people who got injured. He said unfortunately no, we had to wait. I was so worried, I never had an experience like that before, especially in Toronto. I waited for about an hour, and then she finally called me. I said ‘where are you? Why aren’t you answering the phone?’ She told me she was in the subway and didn’t have service underground, and passengers weren’t able to leave. She didn’t know what had happened when she came out of the station. The call came not long after I spoke to the police officer. When I saw her, I hugged and kissed her, and I said: ‘Thank god you are safe.’

Rastgou was getting a new bank card at a BMO Bank of Montreal in the North York Centre when he witnessed the attack. At first, he had trouble believing his eyes.

We saw a white, commercial or industrial van driving fast on the sidewalk beside North York Centre. I thought it was some crazy guy driving to beat the traffic, but then I saw everybody running. Then I saw someone’s shoe, with blood on the ground and I realized it’s way more serious than I thought.

It was Rastgou’s first day home in nine months—he’d returned from Australia earlier in the day.

I think there was a group of people that knew one of the victims who got hit. Many people around us were crying—everyone was shocked. The whole bank stopped working. After about five or six minutes, the mall’s management shut down the bank and told us there was a lockdown in the building. They shut down everything. Then we came outside and there was a helicopter in the sky. The cops arrived almost immediately and closed the scene.

When I came outside I saw one of the victims on the sidewalk. Right now, I’m terrified—this being my first day back from another country to a place that I call home, and a tragedy like this happens.

A server at Menya Fuji restaurant, near the scene, Chi recalls the grim aftermath.

It’s a sunny day and everybody should be fine walking on the road. The sirens are all around … We just walked outside to the corner of Finch and Yonge Street and saw there was a huge incident. It’s quite near, less than 30 seconds walk to the incident. We just looked out—the road, just a person lying on the road doing CPR. I saw one person lying on the road. I’m not sure if he’s alive or not or seriously injured. I just see the foot, so I cannot see his face—or hers.