Ontario PCs make a plan for carbon pricing, and renewal

A tax even a conservative could love? That's Ontario PC Leader Patrick Brown's quandary as he readies a revenue-neutral plan for carbon pricing 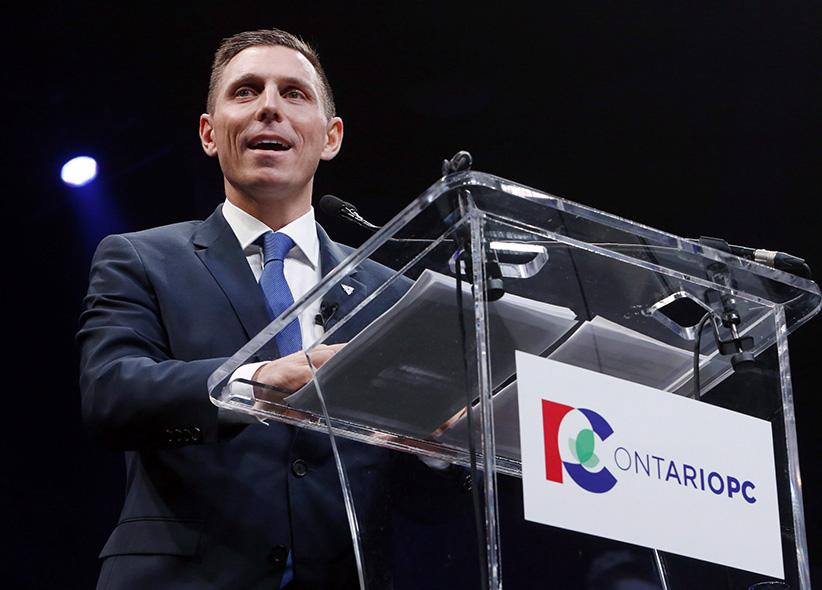 The carbon conversion of Ontario PC Leader Patrick Brown has thrown the wider conservative belief system, already disoriented by the election loss to Justin Trudeau and by the risible nativist Donald Trump, into further chaos. It also might be the first step toward genuine renewal.

“A price on carbon is coming and it’s going to come everywhere,” Patrick Brown told me after he announced his new policy at his party’s convention. “Conservatives can’t run from the debate on the environment.”

For a former MP who spent years applauding every time Stephen Harper called carbon pricing a “tax on everything,” this is either a moment of hypocrisy and opportunism—as his critics say—or a genuine road-to-Damascus epiphany. I’m banking on the latter. Brown, 37, believes the future of conservatism is young voters who want to be on the inside, and not the outside, of the climate debate. He’s even put green and red in the new PC logo, in case anyone misses the change signal.

To cauterize blue wounds, Brown repeatedly invokes conservative precedents like the Reagan-Mulroney agreement to combat acid rain. “As Preston Manning says, there is no contradiction between conservatives and conserve.”

Actually, there is. “Support for carbon pricing is very low among Conservatives and very high everywhere else,” Ekos president Frank Graves says. “When we test which areas the public would like to see greater government resources [directed] toward, environment is No. 1,” says Graves, which is clearly something Brown has picked up on. “But, for the current conservative base, it’s all ‘drill, baby, drill’ and ‘don’t touch my taxes,’ and that is the dilemma for Brown.”

It’s the sort of dilemma all conservatives are struggling with right now. At the recent Manning Conference in Ottawa, conservatives were given an essay called “Notes from the political wilderness,” which candidly admitted they need new ideas and a change of tone. Brown’s carbon-price promise could be the GPS the party needs.

The problem is, even Brown hasn’t fleshed it out. Will he support a tax like B.C., a cap-and-trade system like Ontario and Quebec, or regulation? Brown believes any one of them could qualify as conservative as long as they are revenue-neutral. “Every cent collected has to be given back to the taxpayer in the form of tax relief,” he says.

Brown has conveniently forgotten that former Liberal leader Stéphane Dion campaigned on the exact same idea—a revenue-neutral tax plan called the “Green Shift.” So have Green parties all over Europe. Conservatives have long said there is no such thing as a “neutral tax”—to them it is the liberal unicorn—so why would this be any different? Brown believes that line of thinking is out of date. If conservatives want to lower things like income taxes, Brown knows they will need revenue to offset the losses. And a carbon price means money.

“It’s a great revenue source,” says professor Mark Jaccard of Simon Fraser University, the leading voice on the subject. Jaccard believes governments can decide how to use the funds according to their own ideology. “Some of the money could be used for general government costs, some as reductions of what economists call ‘growth-inhibiting taxes’ such as income tax and corporate tax.”

A potential Progressive Conservative government in Ontario, facing massive deficits and slow growth, could not afford to give up the expected revenue of $1.9 billion from the cap-and-trade system. Politically, Brown turns the shield issue of the environment into a sword. Climate change would no longer be a diversion from friendlier conservative topics like deficits. “If all parties support climate change action,” Brown argues, “then [Kathleen Wynne] has to run on her record.”

If conservatives join progressives on pricing carbon, will anything actually change? Here’s where reality smacks politics in the face. Pricing carbon might not be the holy grail after all. “We should not let the carbon-pricing lobby trick us into believing that we absolutely have to have a price on carbon,” Jaccard told me. “We don’t. We did not use this policy approach to reduce sulfur dioxide, or nitrous oxide, or lead, or particulates, or mercury, or ozone-depleting chemicals.”

In a controversial new article in Policy Options, Jaccard argues that in order to meet the 2030 Harper greenhouse-gas-emission targets, a price on carbon would have to start at $30 a tonne this year and rise to $160 a tonne in 2030. That’s about 40 cents a litre on gas. Even Jaccard admits that is political suicide. But anything less is basically useless. It won’t change behaviour.

“This is why, if he has survival instincts, Trudeau won’t depend solely on carbon pricing,” writes Jaccard. “Instead, he will do what serious jurisdictions do: regulate.”

Wait. Regulate? Isn’t that what Stephen Harper was doing, even if incrementally? In risking his political career, Patrick Brown may end up arriving at the same place as the fossil-award-winning Stephen Harper. The difference is, this time, conservatives would be surrounded by allies, not enemies, which means on the climate issue, they might actually be able to get something done.