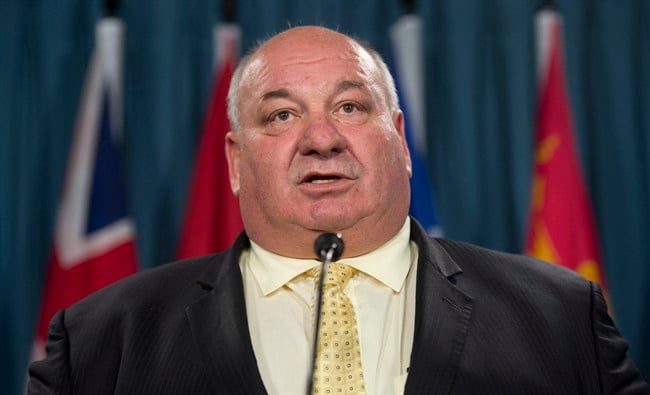 OTTAWA – Ontario Tory MP Larry Miller has been forced to apologize after suggesting that those who wish to wear a niqab while swearing the oath of citizenship ought to “stay the hell where you came from.”

Opposition politicians are saying his remarks are proof of a new low in Canadian politics brought about by a prime minister bent on dividing the country.

Miller made the comments on a call-in show on Owen Sound radio station CFOS on Monday, saying he was baffled as to why the Federal Court overturned a ban on the wearing of niqabs during citizenship ceremonies.

“If you’re not willing to show your face in the ceremony that you’re joining the best country in the world, then frankly if you don’t like that or don’t want to do that, stay the hell where you came from,” Miller said.

“And I think most Canadians feel the same, that’s maybe saying it a little harshly but it’s the way… I’m so sick and tired of people wanting to come here because they know it’s a good country and then they want to change things before they even really officially become a Canadian.”

The federal government is appealing the court decision and the prime minister has said he believes it goes against Canadian values to wear a full-face covering during a citizenship ceremony.

But on Tuesday, his office said Miller went too far.

A spokesman said Miller’s remarks were inappropriate and went beyond “our clear position.”

“What the prime minister has stated is that we believe it is offensive that someone would cover their face at the very moment they want to join the Canadian family,” Carl Vallee said in an e-mail.

Miller echoed that theme in his apology Tuesday.

“I stand by my view that anyone being sworn in as a new citizen of our country must uncover their face. However, I apologize for and retract my comments that went beyond this,” he said in a statement.

Justin Trudeau said the comments prove his point that Harper is stoking fear and prejudice against Muslims.

“This is a prime minister who encourages and condones the politics of division and fear and that is very dangerous in Canada, in a pluralistic, strong, free society like ours,” Trudeau said in a telephone interview.