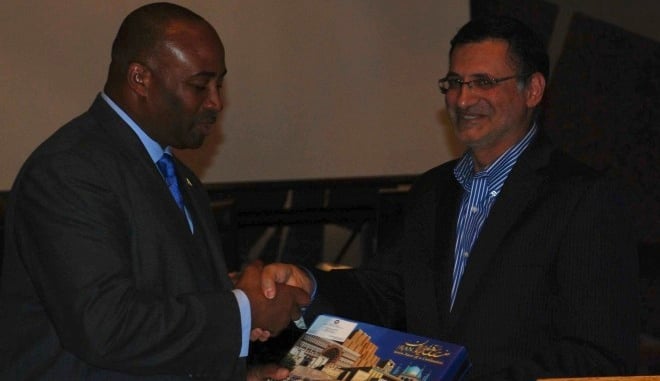 Conservative Senator Don Meredith was the guest of honour at an Iranian embassy reception at Ottawa’s City Hall on Saturday.

The embassy rented space in the main atrium of City Hall for a Persian cultural exhibition. Books, musical instruments, photographs and art were displayed. A video in the background showed Western tourists in Iran marveling at how friendly everybody is. The event was open to the public but does not appear to have been advertised.

Food was served late in the afternoon. Then guests were ushered into the Council chamber, where an Iranian flag stood next to the Canadian one, to listen to speeches and watch another movie. Don Meredith delivered the opening remarks.

The senator began with a few words in Farsi, and joked that his French was even worse. He welcomed guests from the “Soviet” embassy and praised art as a universal language.

He then spoke to the reception’s organizers: those in the cultural wing of the Iranian embassy, as well as Ehsan Mohammadi, president of the Iranian Cultural Association at Carleton University, and the son of an Iranian diplomat in Ottawa.

“I want to take this time to commend you for helping our nations to achieve the unique yet interconnected cultural goals. I think it’s so important that we began to understand each other, that we began to really respect one another,” he said.

Prime Minister Stephen Harper appointed Don Meredith to the Senate in 2010, after Meredith finished fourth in a 2008 federal by-election. He is a Pentecostal pastor and sits on the Senate Standing Committee on Human Rights.

Meredith said he had spoken previously at another Iranian event and had the honour of making a presentation to “my great friend,” Kambiz Sheikh-Hassani, Iran’s chargé d’affaires in Ottawa.

Canadian has imposed severe sanctions on Iran because it believes Iran is actively seeking to acquire nuclear weapons. Prime Minister Harper has described the Iran as “the world’s most serious threat to international peace and security.”

Canada has also sanctioned members of Iran’s Quds Force because of their alleged role in a plot to assassinate Saudi Arabia’s envoy to the United States last year.

“Iran’s current leaders regularly ignore their obligations under international law. They obfuscate Iran’s nuclear activities and they block international attempts to verify the country’s claims,” John Baird, Canada’s minister of foreign affairs, said at the time. “They do so while continuing to violate the human rights of Iranian citizens and undermining regional security.”

But Meredith said his attendance at the Iranian embassy event did not put him in conflict with his party.

“Absolutely not. I’m a senator. I’m free to do as a I wish with respect to my engagement with the Iranian community and with the people of Iran,” he told Maclean’s. “Today’s not about politics. Today’s about enriching one another through art.”

Maclean’s contacted the Prime Minister’s Office but has not received a response.