Chrystia Freeland: 'The negotiations are finished and for Canadians it's important to understand that it's a decision of yes or no' 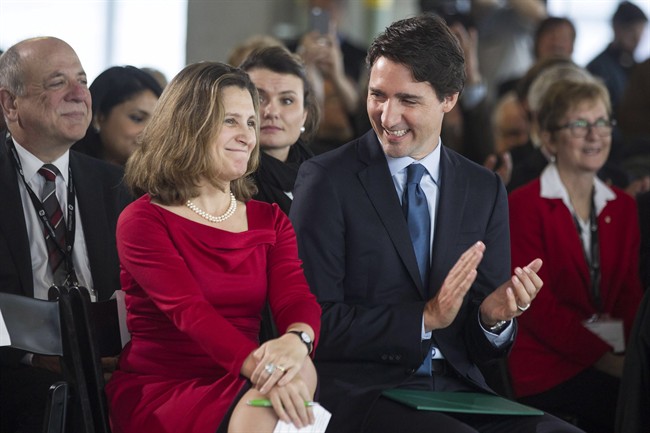 Canadian Prime Minister Justin Trudeau (right) applauds Chrystia Freeland, the federal Minister of International Trade, as she is introduced at a news conference following their visit to the Centre for Commercialization of Regenerative Medicine in Toronto on Wednesday January 13, 2016. (Chris Young/CP)

MONTREAL – A renegotiation of the Trans-Pacific Partnership trade deal is not possible even though serious concerns may be raised during public consultations, Canada’s trade minister said Thursday.

“The negotiations are finished and for Canadians it’s important to understand that it’s a decision of yes or no,” Chrystia Freeland told reporters Thursday after receiving varied feedback at a meeting at the University of Montreal.

Freeland said the treaty negotiated by the Harper government during the election campaign is very complicated, involving 12 countries along the Pacific Rim that make up 40 per cent of the global economy.

All countries have two years to ratify it, but the treaty comes into force if the United States, Japan and four other countries give their approval.

“It’s important for us to understand that we don’t have a veto,” she said.

The NDP said it is unacceptable that the minister would accept the content of the deal even as U.S. presidential candidate Hillary Clinton and some congressional Republicans have voiced concerns.

Trade critic Tracey Ramsey believes there is a way to reopen the deal that preserves jobs and avoids higher drug prices.

“It will involve some work but we know that a better deal is possible for Canada,” she said in an interview.

The minister said she’s heard both opposition and support in consultations so far. A Council of Canadians representative on Thursday described TPP as a deal of “plutocrats” in reference to a book of the same name about income inequality that was written by Freeland before she entered politics.

University of Montreal political science professor George Ross wondered about the point of the government’s commitment to consult if changes are impossible because they would risk unravelling what had been achieved.

Still, Freeland said the government is committed to hearing from Canadians before a ratification vote is held in Parliament.

No date has been set for hearings or a final vote. The Liberal government also hasn’t announced whether it will attend the formal signing Feb. 4 in Auckland, N.Z.

Freeland said the key date is ratification, not the formal signing. But her parliamentary secretary, David Lametti, said in order to ratify, you have to sign the deal.

“So we’ll go through each step one at a time.”

Meanwhile, Freeland said the complexity of the TPP hasn’t slowed the government’s work on ratifying a trade deal with the European Union known as CETA, describing it as a priority for the government.

“I think CETA will be really the gold standard of trade agreements. I’m working hard on it and I’m confident we will get a deal soon,” she said, refusing to say if approval will come before TPP.