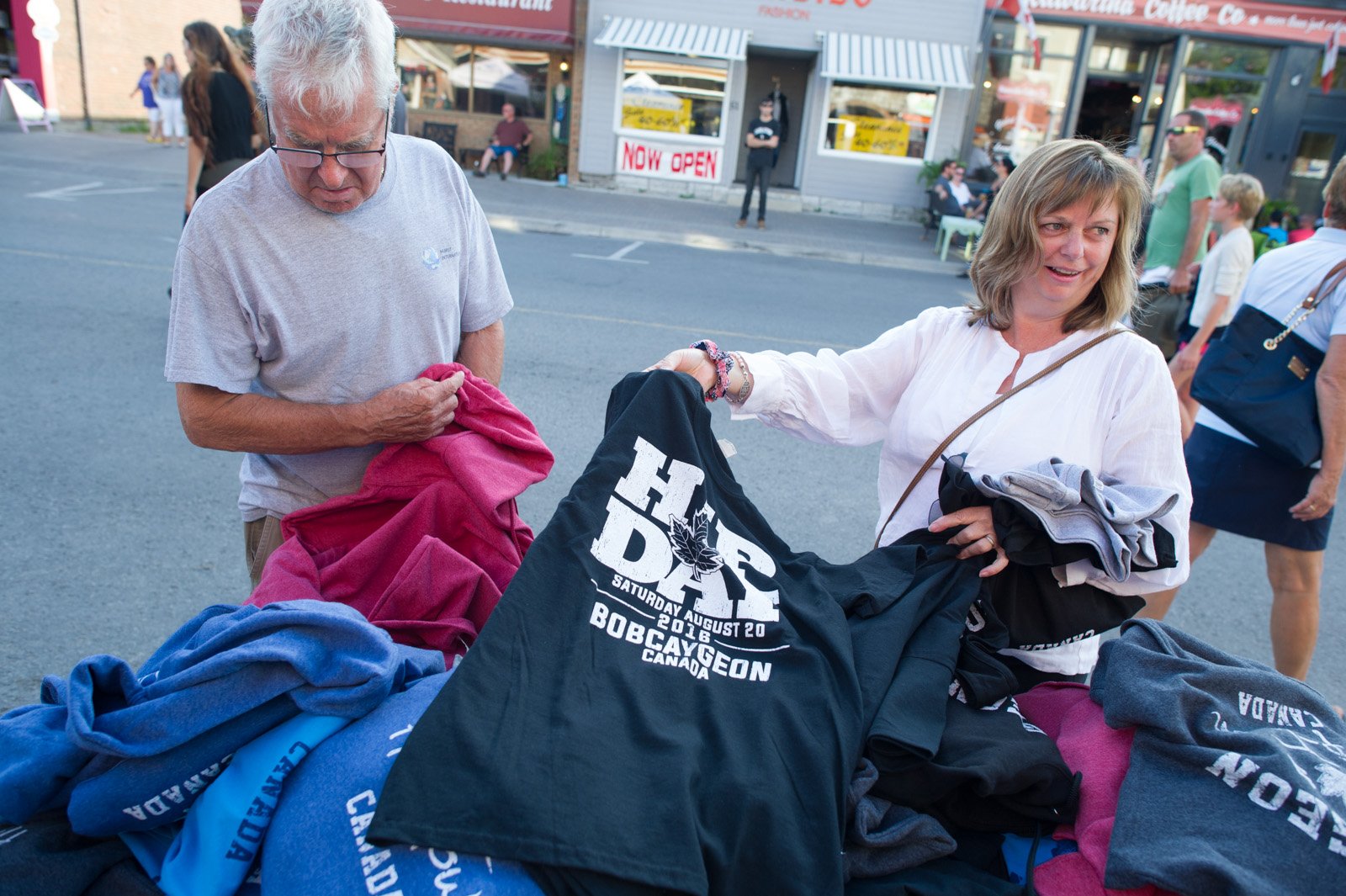 Bobcaygeon, Ont., is reaching capacity. No dress rehearsal has prepared locals to close down the main street and broadcast the final concert for the band that brought them fame. One bed and breakfast has turned away 27 visitors. Twelve portable toilets have been trucked in from the nearby town of Lindsay. Water dishes for dogs on the sidewalks are getting shallow. Most troublesome, however, is that the town is running out of T-shirts.

“We knew this was going to be big,” says Gary Vaters, whose company was scrambling to print 800 final shirts on Saturday. “We had no idea this was going to be monstrous.” Vaters and his team of six have spent three weeks supplying local stores with shirts and hoodies reading, “Bobcaygeon 1999 Hip-Town Canada.” Combined with band shirts they printed for Kingston, Ont., Vaters estimates they’ve sold 15,000 garments. “We literally do not have another shirt left to print [on],” he says after the last batch.

The wardrobe demand is just one testament to the significance of Bobcaygeon on The Tragically Hip’s final tour. “If you travel the world, and you sing Bobcaygeon, they know it,” says Aaron Shaw, the owner of a local landscaping business, who initiated the plan for a public screening. “Thailand, Dubai, Afghanistan, absolutely,” he says. Indeed, a reporter from Al Jazeera International is in Bobcaygeon today.

The impromptu decision to host a screening began earlier in August, when Shaw heard a Hip song in a restaurant. “I thought, ‘Wait a second. The final show is on August 20. We can [screen] this in Bobcaygeon.” Shaw voluntarily put up $11,500 to rent jumbotrons and sound equipment, and other business owners united to get a permit to close the street and lift the noise bylaw, so they can boom out music as long as the encores endure. A dozen people will carry donation buckets for the Canadian Cancer Society. Vaters will give $5 from each T-shirt sale to the Sunnybrook Hospital in Toronto (Downie is being treated by neuro-oncologist Dr. James Perry at Sunnybrook).

With at least 5,000 people expected, Canadians drove from the Greater Toronto Area, Ottawa and even Kingston to watch the show. Jim Lahey, 19, commuted from Bowmanville for the sake of the communal vibe. “I could sit at home alone or go to some lame party,” he says, “but this is more than music to me.”

The town is a quintessential escape from city life, a cottage land of boats tied up and dogs let loose, and trees over-decorated with homemade trinkets. People carry little else but umbrellas—for the sun, of course—and wear little more than grins. It’s the town that never slumps.

The song Bobcaygeon is 17 years old — by now, you’d think locals might be tiring of it. “Never ever ever ever,” says Brittany Collins, a shop clerk. “We play it on repeat.” A nautical dream, the town’s canals weave beneath a bridge that opens and closes, clogging up roads with delightful inefficiency. Compared to Toronto’s waterfront, even the driftwood seems to move slower. It’s got nowhere to be.

As the T-shirt printers deliver final loads, the Himalayas of concert clothing sell out of stores. Vaters’ employee, Leah Baye, threatens to cry with pride as she watches customers put on the product of her work, which has kept her from sleeping since Sunday. “I live for it,” she says. The shirts, over time, may fade. So machine wash cold.