Internal documents reveal worries about concrete deck of the busiest bridge between Canada and the U.S. 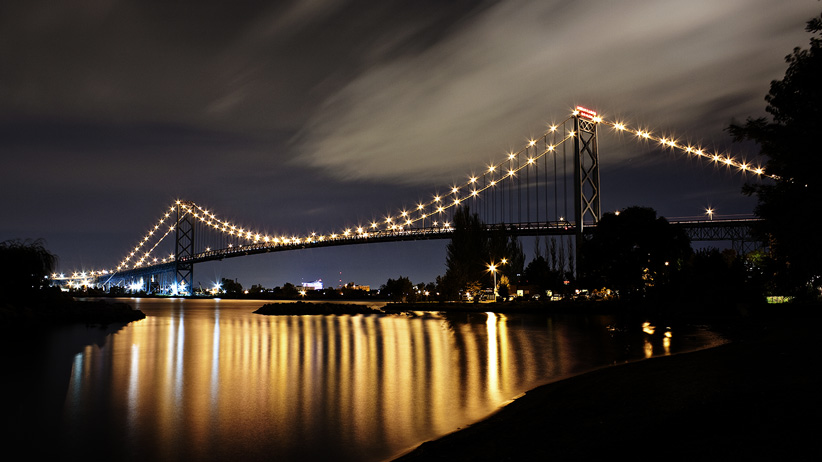 The concerns focused on the concrete deck of the Ambassador Bridge that supports the roadway thousands of vehicles use annually to carry people and goods between Windsor, Ont. and Detroit, Mich.

The Windsor-Detroit crossing is the busiest commercial trade crossing between the U.S. and Canada with almost one quarter of all goods moving between the two countries over the bridge and through the nearby tunnel.

Briefing material provided to Marc Garneau shortly after he was appointed transport minister show the company that owns the bridge promised to carry out work on the concrete deck, but Transport Canada officials didn’t believe the work addressed their concerns.

The Canadian Press obtained a copy of the document under the Access to Information Act.

Garneau’s briefing came amid a public furor over maintenance and safety issues with the bridge.

Transport Canada officials now say the Canadian Transit Company, which owns the Canadian side of the Ambassador Bridge, has started to address the concerns first raised about two years ago.

They didn’t detail work to date and the company has not returned multiple messages seeking comment.

The state of the bridge, and just how much work it needs, has been the subject of a long-running battle with political undertones: the American-based owner of the Ambassador Bridge, Manuel “Matty” Moroun, has fought construction of the Gordie Howe international bridge between Windsor and Detroit, for which the federal government is paying. At the same time, the federal government hasn’t backed Moroun’s proposal to build a second span on the Ambassador Bridge.

There was another black mark in the relationship last weekend when the government ordered the Canadian Transit Company to install emergency barriers in the interest of public safety while repairs to the sidewalk, curb and railings continues.

The order, known as an emergency direction, is used in cases where federal officials feel their concerns have not been fully addressed by the owner of a bridge or tunnel.

“The safety of the Ambassador Bridge is of critical importance,” Garneau said in a statement.

“Should action not be taken in a timely manner, I will not hesitate to take additional safety measures.”

It shouldn’t be surprising that an 86-year-old bridge is in need of repair.

Older concrete structures tend to crack due to their age. In the case of a concrete deck for a suspension bridge like the Ambassador Bridge, inside the concrete is a steel skeleton that connects to suspension cables.

When the concrete cracks on bridges, salt used to clear roads in the winter makes its way to the reinforcing steel skeleton, known as rebar, and rust builds. The rust takes up more space than the rebar and causes further damage to the concrete, said James Wight, a professor of structural engineering at the University of Michigan.

“As it (the rust) expands, it starts popping pieces of concrete off, or making the cracks larger,” he said.

“It is a deterioration cycle that once that calcium chloride gets to the steel, it starts rusting and that further deteriorates the concrete.”

The most recent concerns about the concrete deck on the Ambassador Bridge date back to June 2014 when an engineering firm recommended the Canadian side of the bridge be “completely rehabilitated or replaced,” Garneau’s officials wrote in the briefing note.

One year later, Transport Canada inspected the bridge again and asked the Canadian Transit Company to take immediate action to repair the sidewalk, railings and concrete deck. The company crafted a plan in July 2015 to do localized repairs on the concrete deck, and replace the sidewalk and barrier walls.

By mid-October 2015, and after the city of Windsor closed streets underneath the bridge amid reports of falling concrete, Transport Canada expressed what the briefing note said were concerns about the company’s “unfulfilled commitments to complete repair work.”

The company has done work on the east side of the bridge. It’s the western sidewalk that raised concerns from a Transport Canada inspector who walked the bridge last month. Senior officials recommended that emergency barriers be installed because they felt the railings wouldn’t have stopped a car or truck.