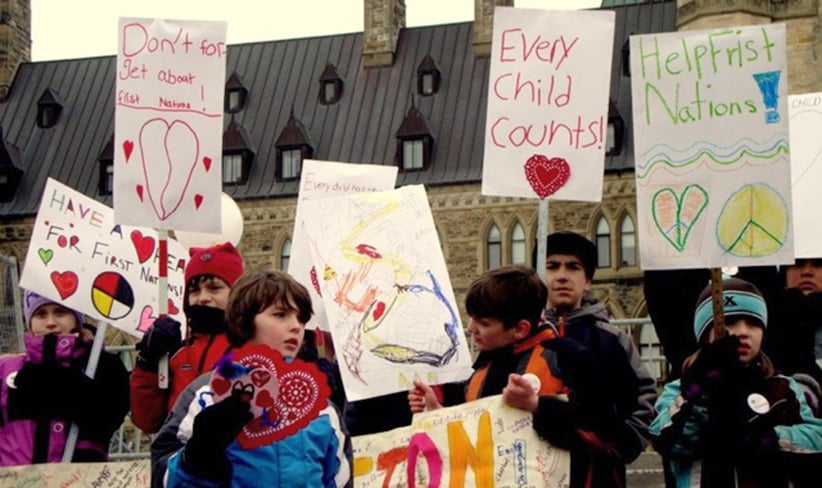 Gathering at Parliament Hill for the annual youth-led Have a Heart Day in 2012. On Tuesday, the Canadian Human Rights Tribunal ruled the federal government discriminates against First Nation children on reserves by failing to provide child welfare services equal to those elsewhere. (First Nations Child & Family Caring Society of Canada)

OTTAWA – The Canadian Human Rights Tribunal has ordered the federal government to immediately enact a policy that would provide services to First Nations children to ensure their health and welfare doesn’t get caught up in red tape.

In its decision, the tribunal also called on the federal Department of Indigenous Affairs to report back within two weeks to confirm the policy — based on an established doctrine known as Jordan’s Principle — has been implemented.

“There is already a workable definition of Jordan’s Principle that has been adopted by the House of Commons,” the panel said Tuesday, referring to a 2007 NDP motion that unanimously passed in the Commons.

“While review of this definition and the federal government’s framework for implementing it may benefit from further long-term review, the panel sees no reason why the current definition cannot be implemented now.”

It is the season for change and “the time is now,” the tribunal said.

Jordan’s Principle is named after Jordan River Anderson, a five-year-old boy with complex needs who died in hospital in 2005 after a protracted two-year battle between the federal and Manitoba governments over his home care costs.

Tuesday’s decision helps to ease the disappointment of the recent federal budget, said Cindy Blackstock, the executive director of the First Nations Family and Caring Society, whose nine-year dispute with Ottawa over child welfare services culminated in a landmark tribunal ruling in January.

“The panel acknowledges the suffering of those First Nations children and families who are or have been denied an equitable opportunity to remain together or to be reunited in a timely manner,” the ruling said.

Following the decision, Blackstock said she was deeply disappointed in a federal budget that only earmarked $71 million for child welfare in the first year — a fraction of what she said was needed to restore fairness.

“(The tribunal’s) order that the federal government immediately implement Jordan’s Principle across all children and across all government services and report back to the tribunal within two weeks is especially encouraging,” Blackstock said.

“That will immediately impact, for the better, the lives of literally hundreds and thousands of kids.”

The decision means the government will have to spend more money in order to provide a level of services to First Nations children comparable to those offered by the provincial system, she added.

“My hope has always been that the federal government will move to do the right thing completely for these children while they’re still little kids,” she said. “Then we don’t have to have future court orders.”

NDP indigenous affairs critic Charlie Angus also praised the tribunal’s findings — and noted it as a “humiliating moment” for a new government that has boasted about change, particularly when it comes to First Nations.

“Obviously, the tribunal doesn’t believe this government can be trusted on this issue and nowhere do you see that more than on the issue of Jordan’s Principle,” he said.

“It is, I think, a real indictment of an attitude that the lives of these children can be put on hold until it is convenient for government.”