Tributes pour in for 'Mr. Hockey' 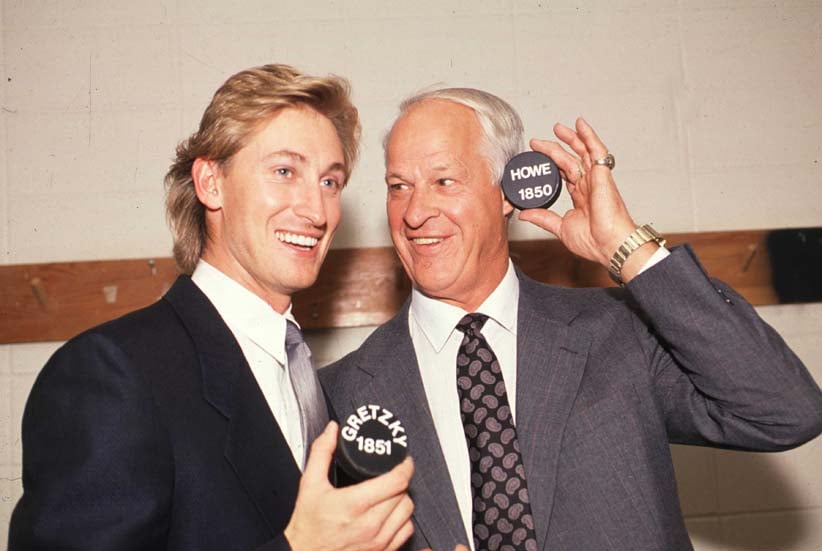 EDMONTON – OCTOBER 15: Wayne Gretzky of the Los Angeles Kings stands with Gordie Howe as they pose with the 1,851 puck that Gretkzy scored with to pass Howe as the all-time point leader in the NHL against the Edmonton Oilers on October 15, 1989 at Northlands Coliseum in Edmonton, Alberta, Canada. (Bruce Bennett Studios/Getty Images)

From Parliament Hill to the flat Saskatchewan prairie where Gordie Howe learned the game, tributes poured in Friday for the man known simply as Mr. Hockey.

The Hall of Famer died at his daughter’s home in Sylvania, Ohio, at the age of 88.

“Mr Hockey left peacefully, beautifully, and (with) no regrets,” his son Murray said in a text to The Associated Press, adding that his father died simply of “old age,” not another stroke like the one he had in October 2014.

Flags were lowered to half-mast in his hometown of Saskatoon.

In Ottawa, Prime Minister Justin Trudeau lauded Howe as an inspiration to generations.

And the man who scored the greatest goal in Canadian history recalled a legendary quiet leader with a heavy shot and even heavier elbows.

“He was built to be a hockey player,” Paul Henderson said in an interview. “He was strong as an ox. He was mean as a rattlesnake and you treaded lightly when you came around him.

“He had a very heavy shot and a soft touch. Old school hockey. That was Gordie Howe.”

He still sits number two on the NHL’s all-time goals list at 801, surpassed only by Wayne Gretzky, the man who grew up idolizing Howe and wore No. 99 to honour the man who wore No. 9.

The Great One said via Twitter that Howe was “the greatest hockey player ever,” and “the nicest man I have ever met.”

“Sending our thoughts and prayers to the Howe family and to the millions of hockey fans who like me loved Gordie Howe,” Gretzky added. “RIP Mr. Hockey.”

Henderson played with Howe in the 1960s in Detroit, recalling an Olympian presence in the rink named the Olympia.

“He wasn’t a holler guy. He was pretty quiet in the room,” said Henderson, who achieved fame in 1972 when he scored the winning goal in the deciding game of the Canada-Russia Summit Series.

Henderson said Howe’s scoring touch went hand-in-sweaty-glove with his ability to establish who was in charge in the corners.

Henderson said teammate Ted Lindsay once told him Howe was the baddest on the block right off the bat.

“When he came into the league, around every team, he took on the toughest guy and beat the snot out of him, (sending the message) ‘Don’t mess with me,”’ said Henderson.

Howe has said the violence was less emotional than tactical – an early elbow to an opponent translated into more room to manoeuvre the next time around.

Henderson said Howe made sure rookies got the message early.

One time, he said, a buddy of his was brought up to the Boston Bruins. Out of compassion he warned his friend while skating in warmups.

“I said ‘Keep your head up around the big guy,” said Henderson.

“The second period, they blow the whistle, and I look up and here’s this guy he’s out cold on the ice. I asked Normie (Ullman) how and he just said ‘Gordie.”’

Howe’s legacy remains his staying power, playing in and around six decades at hockey’s highest levels, specifically the NHL and the World Hockey Association.

Henderson says he remembers skating against Howe in the WHA, with Henderson is his 30s and Howe in his 50s, and Howe owning everybody on the backcheck.

And even then, said Henderson, Howe demanded respect be paid.

“That was the biggest mistake (opponents) ever made calling him an old fart,” he said.

As a 19-year-old, Cournoyer was in awe of Howe. He was lucky that day because he didn’t have to line up against Howe, a job that belonged to teammate Gilles Tremblay

“He was not a dirty player,” Cournoyer added. “He was strong. He played hard. He wanted the puck. But I don’t think he was dirty.”

Cournoyer made the comments with a heavy heart, noting that so many top players from the old days have died in the last few years, including Canadiens Jean Beliveau, Elmer Lach, Dickie Moore and Tremblay.

Howe played against them all.

NHL commissioner Gary Bettman called Howe a “remarkable athlete,” adding he will be remembered as much for what he did off the ice as on.

“Gordie’s toughness as a competitor on the ice was equalled only by his humour and humility away from it. No sport could have hoped for a greater, more-beloved ambassador,” said Bettman.

Former Red Wings captain Steve Yzerman said Howe was an icon not only in Detroit, but throughout the entire hockey world.

“As one of the greatest players to ever play in the NHL, the majority of his career being in Detroit, it was an honour to wear the same uniform, spend time with, laugh, joke and seek advice from him,” he said. “Gordie’s humility and kindness left a permanent impression on me, greatly influencing how I tried to conduct myself throughout my career.”

“He showcased the best of what Canadians like to think of ourselves as, highlighted both our national sport and our national identity on an international stage,” he said.