Collin Fitzgerald, one of the country's most highly decorated Afghan war veterans, is facing criminal proceedings 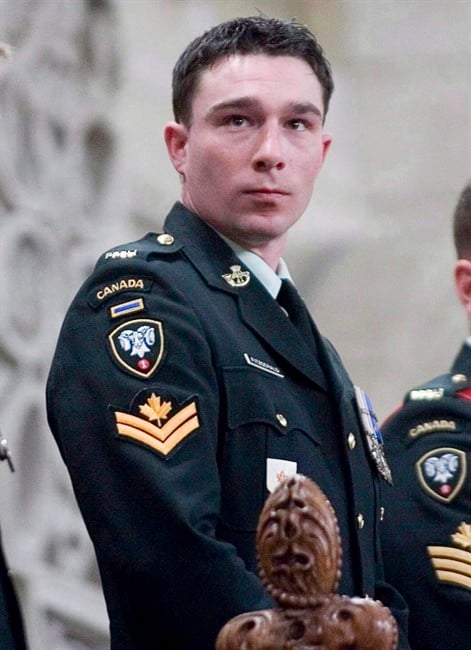 OTTAWA – Collin Fitzgerald, one of the country’s most highly decorated Afghan war veterans, is facing criminal proceedings, even though justice officials have witness statements and recordings that contradict the case against him.

The former master corporal is charged with breaching bail conditions.

The statements were provided by three former neighbours who photographed a July 2014 fire that destroyed the ex-soldier’s house in Iroquois, Ont., south of Ottawa.

The Ontario Provincial Police used the photos and the claims of a fourth neighbour to charge Fitzgerald with being at the scene of the blaze, something that would constitute a breach of his bail conditions in a previous case.

But Mary-Ellen Dillabough, whose son took the pictures, says they told police the person in the images was definitely not the troubled former soldier, who has a history of run-ins with the law related to his post-traumatic stress disorder.

Dillabough, her spouse Derek Vanveld, and son — Anthony Merkey — each signed statements to that effect the day after the fire.

Even more troubling, she said she doesn’t know what became of those statements, if police took them into consideration, whether the Crown is aware of them, or even why Fitzgerald was charged in the first place.

“They asked us if we thought it was Collin — or could it be a possibility — and we said: ‘No’,” Dillabough said in an interview with The Canadian Press.

“They can do what they want, (but) I know it’s not Collin,” she said, noting the person in the photo had a different build than the lean ex-soldier. “I have a statement, Derek has a statement, Anthony has a statement. They’ve all been submitted to the police. And it was a recording too. Why are our statements not there?”

Fitzgerald says the statements and recordings were not part of the disclosure package given to his lawyer and he also wonders if they have gone “missing.”

The Crown office has directed all questions to the Attorney General’s department and spokesman Brendan Crawley was asked if prosecutors had seen the material.

“As this matter is currently before the courts, it would be inappropriate to comment,” Crawley wrote in an email.

“I would need to see the evidence, but this sounds like a significant miscarriage of justice,” he said. “The questions needs to be asked and answered forthrightly. Is the Crown aware of this evidence? If not, why not?:

Fitzgerald, 36, will face trial in December on the breaching bail charge.

In addition to the neighbours’ statements, the Crown also has evidence from cell phone tower records that place him elsewhere on the night of the fire and an affidavit from the person Fitzgerald was on the phone with at the time.

The ex-soldier was not charged in connection with the house fire, only for breaking bail conditions on a previous charge, which required him to remain at his parents’ home in Morrisburg and have no contact with his ex-wife.

Fitzgerald said he has been treated as a threat to public safety at a time when he is trying to turn his life around.

“I believe the OPP were trying to make this up to either have me thrown in jail — or run out of town,” he said.

He was under bail restrictions as the result of charges stemming from an incident in the spring of 2014, where he was accused of criminal harassment and intimidation of a police officer. He has yet to stand trial on those charges.

Fitzgerald was awarded the Medal of Military Valour for aiding wounded comrades in a burning vehicle under enemy fire in 2006, but has had a tumultuous personal life since leaving the military. In March 2013, he was involved in a five-hour standoff with police, after he allegedly barricaded himself inside his home and threatened to blow it up.

There were no explosives in the house, but police said they seized two weapons.

The ex-soldier freely admits that, at the time, he hoped to die at the hands of police.

The incident took place at the beginning of a difficult divorce, but Fitzgerald said he has since sought treatment for PTSD.