Liberals to release plan to bolster funding for aboriginal education 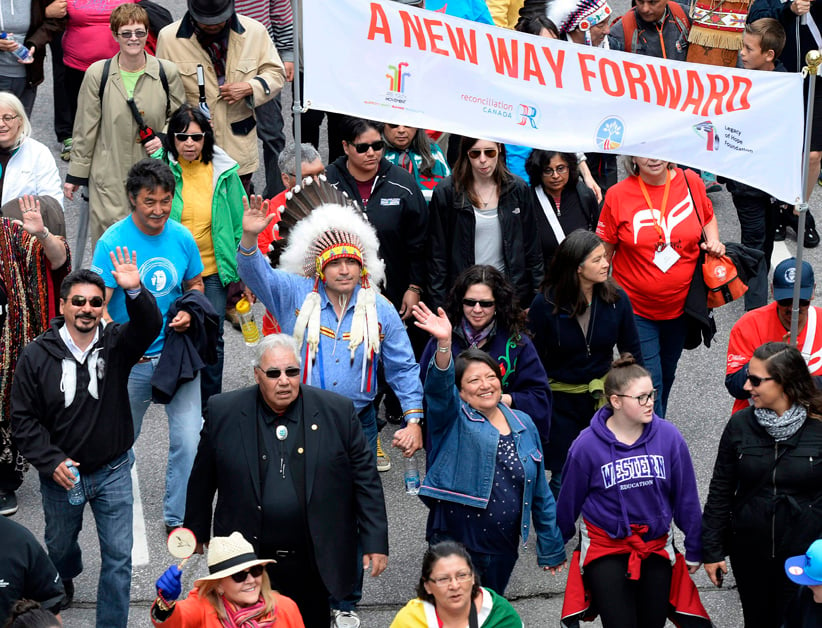 Assembly of First Nations Chief Perry Bellegarde (in headdress) and Justice Murray Sinclair (in black suit), TRC commissioner, march during the Walk for Reconciliation, part of the closing events of the Truth and Reconciliation Commission on Sunday, May 31, 2015 in Gatineau, Que. (Justin Tang, CP)

OTTAWA — Liberal Leader Justin Trudeau is set to deliver a series of campaign-style commitments in Montreal as indigenous leaders meet for an annual gathering of the Assembly of First Nations.

In a speech this afternoon, Trudeau is poised to promise bolstered funding for aboriginal education.

Trudeau also plans to address the need to overhaul the relationship between First Nations and the federal government, such as targeting the growing socio-economic gap that exists between aboriginal and non-aboriginal Canadians in areas including employment, Ottawa sources tell The Canadian Press.

The Liberals have already tapped AFN regional chief Jody Wilson-Raybould to run as the Grit candidate in the new B.C. riding of Vancouver-Granville.

NDP Leader Tom Mulcair is also set to deliver a speech at the AFN event in Montreal, but his party has yet to indicate if he will make policy announcements during his remarks.

The government’s relationship with aboriginal people has been under the microscope in recent weeks following the release of a scathing report from the Truth and Reconciliation Commission, which described Canada’s residential school system as “cultural genocide.”

The commission’s summary report said the current relationship with the federal government and aboriginal peoples is “deteriorating” due to ongoing conflicts over education, child welfare, and justice.

Aboriginal education has been a particularly thorny issue for both the government as well as the AFN.

In February 2014, federal Conservatives thought they had the support of the AFN’s then-national chief Shawn Atleo and other indigenous leaders when they announced $1.9 billion in federal money for a First Nations education act.

Some indigenous leaders were opposed to the legislation because they felt it gave the federal government too much control.

The deal subsequently dissolved and led to Atleo’s departure as head of the AFN that May.

Aboriginal Affairs Minister Bernard Valcourt continues to defend the government’s legislation and says it met the conditions outlined by the AFN and aboriginal leaders. But there has been no sign of any meeting of the minds that would allow an education deal to progress.

Valcourt’s office has confirmed he is not attending the assembly’s annual gathering.

Saskatchewan’s Perry Bellegarde, who became AFN national chief in December 2014, has continued to call on the government to address another issue — the number of missing and murdered aboriginal women in Canada.

Bellegarde wants to see a national public inquiry to address the crisis. This call has also been supported by opposition parties, provincial and territorial premiers and United Nations’ special rapporteur on the rights of indigenous peoples James Anaya.

The Conservatives continue to reject the idea of an inquiry and argue more study is not needed.

Last March, Valcourt drew the ire of some First Nations after he said 70 per cent of murdered aboriginal women were killed by aboriginal men. They felt the minister was placing blame on indigenous people.

But the minister’s comments have since been supported by new RCMP statistics which indicate aboriginal women continue to be most frequently killed by men they know.

The RCMP data, released in June, showed female victims, regardless of their ethnicity, continue to be targeted most often by men within their own homes and communities.