Canada and the U.S. also committed to work together to improve methane data collection and reporting 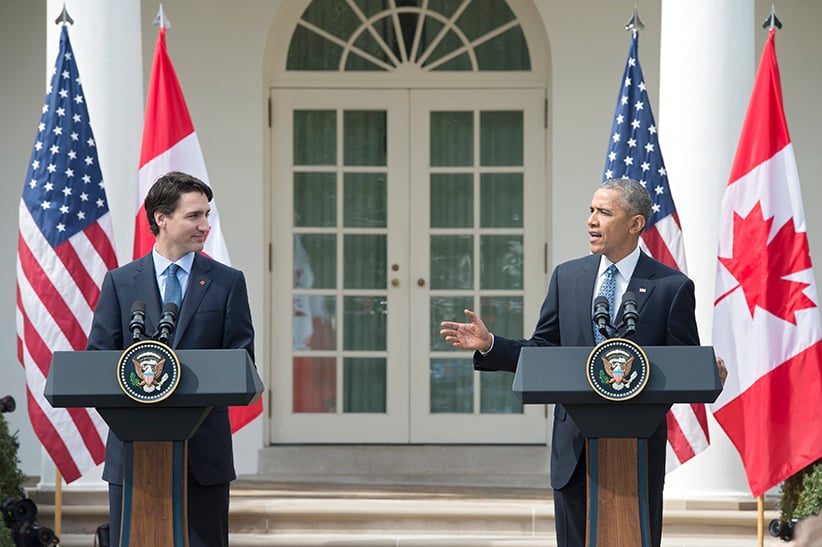 Barack Obama and Justin Trudeau in the Rose Garden of the White House. (Michael Reynolds/EPA/CP)

CALGARY — Prime Minister Justin Trudeau’s promise to reduce methane emissions in the oil and gas industry is being welcomed by environmentalists and, with some reservations, by industry players, as a key step in fighting climate change.

Trudeau, in a joint statement with U.S. President Barack Obama on Thursday, committed to reduce methane emissions by 40 to 45 per cent below 2012 levels by 2025.

Chris Severson-Baker, Alberta director of the Pembina Institute, said reducing methane emissions is critical because the gas is 25 times more potent as a climate warming agent than carbon dioxide.

He said the new targets are similar to what Alberta committed to last November, but having that target adopted more widely will help with industry acceptance.

“If you don’t have similar rules for other parts of Canada you create a competitiveness concern for operators,” he said.

Environmental Defense Fund president Fred Krupp said the agreement is important because methane is responsible for about a quarter of today’s warming, and the U.S. and Canada are the world’s second- and fourth-largest emitters of oil and gas methane respectively.

“Today’s announcement of a joint climate strategy between the U.S. and Canada moves the world a step closer to a future safe from climate change,” said Krupp.

In Edmonton, Premier Rachel Notley said she was pleased to see the template for reducing methane emissions introduced by her government last November used on a larger stage.

She noted it received a buy-in from both industry and environmental leaders and was later brought up in discussions with officials in the Canadian and U.S. governments.

“We were able to come up with a road map to achieving this and because it was so thoughtfully done, it was then very easy for other governments to look at it, study it, and say, ”Wow, everyone can work with this? Great. Let’s replicate it,’“ said Notley.

Alex Ferguson, vice-president of policy and performance at the Canadian Association of Petroleum Producers, said industry supports ongoing efforts to reduce methane emissions, but that they will take a lot of hard work to accomplish.

“It’s achievable, it’s not going to be easy,” said Ferguson.

He said a “healthy respect for the economic conditions” by policy-makers will be key in making the proposed reductions a success.

An Environmental Defense Fund-commissioned study by consultancy ICF International found that Canada’s oil and gas industry could achieve a 45 per cent methane emission reduction at an average cost of $2.76 per tonne of carbon dioxide equivalent.

CAPP has said there is still a lot of uncertainties about the proposed policies, but it estimates the cost to be much higher, at somewhere between $8 and $25 a tonne.

Estimates vary widely on just how much methane is leaked from the vast network of oil and gas wells, pipelines and processing plants, but the problem has cast doubt on how much better natural gas is than coal for the environment.

Canada and the U.S. have also committed to work together to improve methane data collection and reporting, and collaborate on ways to reduce methane emissions.