Trudeau at the UN—follow Mandela's example

As the PM pushes for a seat on the UN Security Council, he spoke at the Nelson Mandela Peace Summit: 'Canada will always stand tall for democracy.' 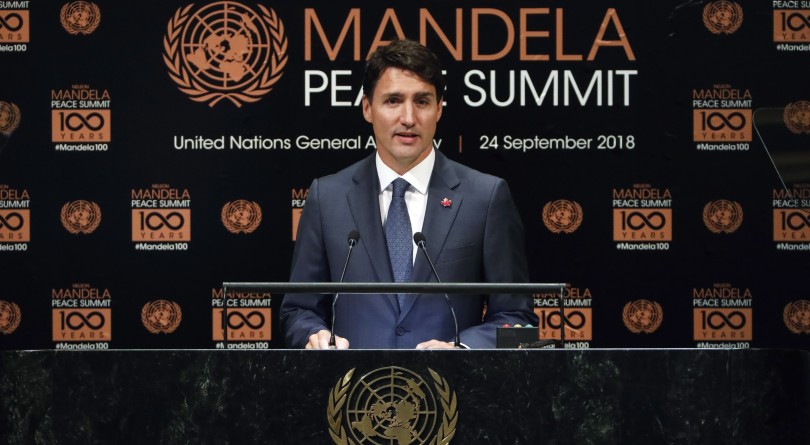 Prime Minister Justin Trudeau is paying tribute to the late Nelson Mandela by urging world leaders at the United Nations General Assembly to follow his example and champion democracy, human rights and the rule of law around the world.

Trudeau kicked off his visit Monday to the UN by taking part in the Nelson Mandela Peace Summit, timed to mark this year’s 100th birthday of the former South African president.

He said while global threats like climate change, armed conflict and other “emerging threats” continue to test the world’s commitment to Mandela’s values, the man known as “Madiba” would only see such challenges as evidence of work still to be done.

“All have tested the strength of our commitment and the bounds of our compassion,” Trudeau told the assembly hall.

“At times like these, we must remember the example of Nelson Mandela, who believed that we should not despair, for our troubles only bear witness to a job unfinished.”

READ MORE: Donny from marketing goes to the United Nations

Trudeau used the occasion to reaffirm Canada’s own commitment to issues like ethnic rights, gender equality and the treatment of Indigenous Peoples.

“As we pay tribute to the legacy of Nelson Mandela, Canada reaffirms its commitment to push forward the work he began. Canada will continue to call out the unfair treatment of racial and ethnic minorities, of women and girls, of Indigenous Peoples,” he said.

“We will continue to speak up for the refugees of Rohingya, for the Yazidis of northern Iraq, for the people of Venezuela. Canada will always stand tall for democracy, the rule of law and human rights at home and abroad.”

Trudeau had a number of bilateral meetings with world leaders on his summit itinerary Monday, including one earlier in the day with the prime minister of Nepal, who thanked Canada for its humanitarian help following that country’s devastating earthquake in 2015.

A major item on Canada’s to-do list at this week’s summit is to resume its stalled campaign for a coveted two-year temporary seat on the UN Security Council—an endeavour that has taken a back seat to the government’s efforts to rescue the North American Free Trade Agreement.

And NAFTA surely won’t be far from Trudeau’s mind this week, either—there’s talk of a meeting on the summit sidelines between Foreign Affairs Minister Chrystia Freeland and U.S. trade ambassador Robert Lighthizer.

Canada is in the throes of what Freeland has called a “continuous negotiation” with her American counterparts in an effort to join what is currently a bilateral agreement in principle between the U.S. and Mexico before a looming congressional deadline of Oct. 1.

Trudeau was also scheduled later Monday to attend a meeting of the UN’s economic and social council to talk about how to finance that group’s efforts to advance sustainable development by the year 2030, and attend a roundtable of leaders in girls’ education.