There were no specifics on what projects the fast-tracked money, which came after a meeting between Rachel Notley and Justin Trudeau, would fund in Alberta 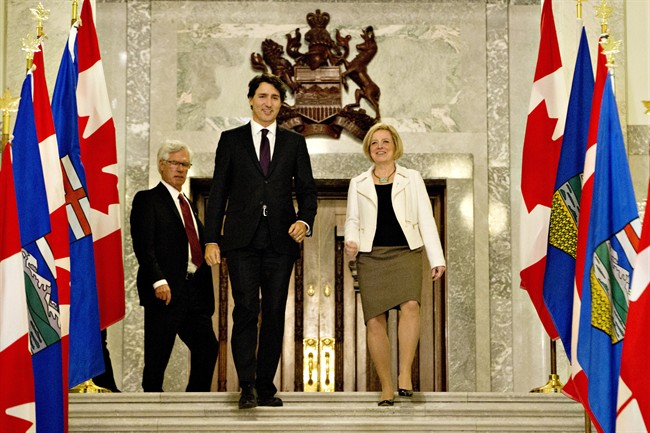 The federal government has been saying it wants to expedite $13.1 billion in existing, national infrastructure cash allocated by the previous Conservative government, but never spent. Of that sum, $704 million is earmarked for Alberta.

But there had been no formal announcement on the fate of those dollars. That came after the two leaders met at the legislature in Alberta.

“The federal government is committed to fast-track infrastructure investments for Alberta and, indeed, all provinces and territories,” Trudeau said. “This will help promote jobs and growth where they are needed most.”

There were still no specifics on what projects the money will fund, but Notley said she expects to see it start flowing in a matter of weeks to months.

“There has been a very engaged conversation about what our projects should be, what the list should be and how we can get that money flowing faster and so we today we’re able to confirm that the federal government will start pushing it out the door as soon as we’re ready to go,” she said.

Notley said she also pushed Trudeau to make changes to Employment Insurance that will broaden access for laid-off energy workers.

“I asked the prime minister to consider ways to ensure employment rules make access to EI easier for Albertans and to consider the length the benefit is available,” Notley told reporters.

Trudeau didn’t make any commitments around EI, but noted that his party campaigned on easing access to the program in times of need.

“I assured her that we are looking at this and working to move forward on it as rapidly as possible because indeed we do know that there are families that are looking at the coming weeks with a certain degree of trepidation and we are certainly endeavouring to be there for them,” he said.

After meeting with Notley in Edmonton, Trudeau heads to Calgary on Thursday to meet with leaders in the energy industry.

The province’s oil sector is looking for strong signals that Trudeau is serious about helping deliver its commodity to the coasts where it can be shipped to foreign markets.

A key plank in that plan is Energy East, a controversial pipeline that has drawn the ire of many along its route through Eastern Canada.

Trudeau has faced pressure from some, including Saskatchewan Premier Brad Wall, to advocate for the project rather than playing peacemaker between the different sides.

Trudeau said Wednesday he wants to let the approval process play out through the National Energy Board.

“We agreed that we must get Alberta’s resources to market in responsible, sustainable ways,” Trudeau said. “This agreement is based on our shared goal of ensuring that there is proper market access for our energy projects.”