Trudeau invites premiers and Elizabeth May to UN climate summit 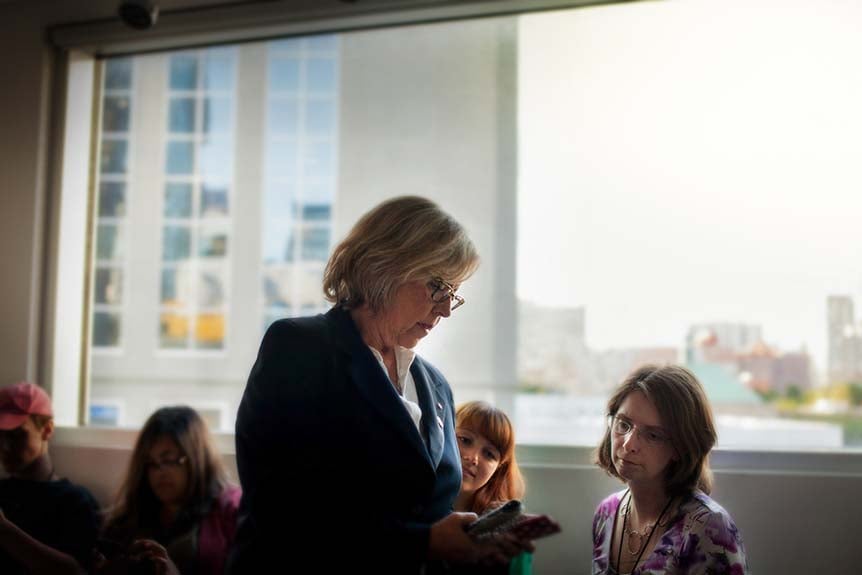 Elizabeth May will be part of Justin Trudeau’s delegation to the UN summit on climate change next month. (Gio Ciampini/Green Party)

OTTAWA — Whatever else political opponents may say about Justin Trudeau’s approach to reducing carbon emissions, they’re not likely to curse his lack of inclusiveness.

The prime minister designate has already invited Green Leader Elizabeth May to be part of the Canadian delegation to the United Nations summit on climate change in Paris at the end of next month.

And he intends to invite NDP Leader Tom Mulcair and whomever is leading the Conservative party — be it Stephen Harper or an interim leader — as well, along with various non-governmental organizations and environmentalists, insiders say.

The premiers of all the provinces and territories that aren’t facing an election this fall have also agreed to accompany Trudeau.

Indeed, back in 2011, before becoming Liberal leader, Trudeau was so incensed by the Harper government’s exclusionary policy that he called the environment minister at the time, Peter Kent, a “piece of s–t” in the House of Commons. His unparliamentary outburst, for which he apologized, was prompted by Kent needling the NDP’s environment critic for not having gone to the climate change conference in Durban, South Africa, when the government had refused to accredit any opposition MPs.

At a 2013 UN climate conference in Warsaw, Poland, May ended up joining the Afghanistan delegation after the Harper government refused once again to include any opposition MPs in its delegation. Being part of Afghanistan’s delegation, rather than attending simply as an observer, allowed her to access to all the negotiations.

“I was an environmental refugee,” May said in an interview. “It’s absolutely outrageous what Harper did.”

May said Trudeau’s more inclusive approach is not surprising; he’s simply returning to the traditional practice of having delegations to international conferences represent Canada, not just the governing party.

Still, she said it bodes well for Canada playing a more constructive role in reaching a global agreement on reducing carbon emissions. She expects Trudeau to be “the polar opposite” of Harper, whom environmentalists have long denounced as a climate laggard.

May, who requested and received a 30-minute meeting with Trudeau this week even as he was immersed in transition plans for swearing in a new Liberal government on Nov. 4, said his willingness to engage with opposition parties is also encouraging, suggesting a less hyper-partisan style of governing.

The Paris summit is aimed at negotiating post 2020 targets for reducing greenhouse gas emissions, following the last major summit that resulted in 2009’s Copenhagen Accord. May said the draft text of an agreement is weak and, if Canada is to prod the conference to agree to something stronger, it will have to set a national target for emission reductions.

During the election campaign, Trudeau steered clear of setting a target, arguing that setting targets that are never met is pointless. He promised instead to work with premiers to develop a national “framework to combat climate change,” supporting the different measures provinces have already taken to put a price on carbon.

At a post-election news conference Tuesday, Trudeau said he’d already begun talking to premiers with the aim of establishing “a strong position” for the Paris summit “so that people know that Canada’s years of being a less-than-enthusiastic actor on the climate change file are behind us.”

Under Harper, Canada withdrew from the original Kyoto protocol on greenhouse gas emissions. Canada is currently not close to meeting its subsequent Copenhagen commitment of slashing emissions by 17 per cent by 2020.

However, the Harper government did put forward an aggressive target in May for cutting greenhouse gas emissions by 30 per cent from 2005 levels by 2030.