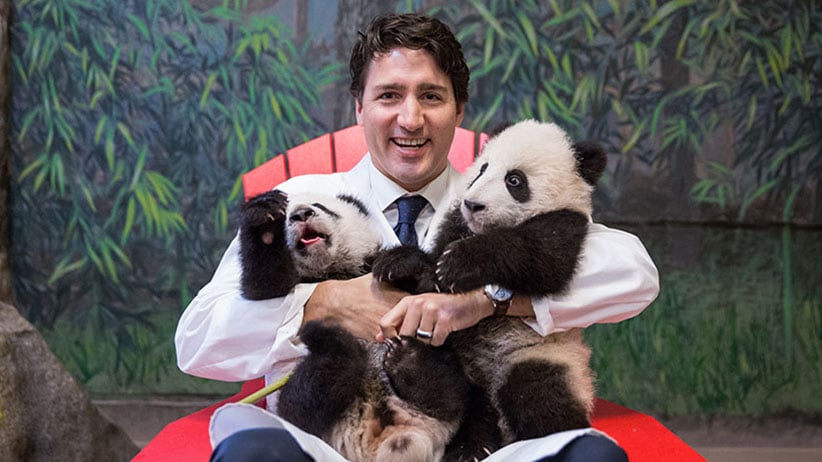 CALGARY – It’s from one self-declared lover of baby panda snuggles to another.

Calgary Mayor Naheed Nenshi has written to Prime Minister Justin Trudeau asking for Ottawa’s help in defraying the considerable cost of housing the critters at Calgary’s zoo in two years.

“As a fellow lover of cute cuddly panda cubs, and having observed with envy your recent opportunity to hold Jia Panpan and Jia Yueyue in Toronto during their naming ceremony, I trust you can understand my own desire to embrace these pandas with open arms here in Calgary,” Nenshi wrote to Trudeau in a May 27 letter.

“I am writing today to request a federal government contribution towards investments required in Calgary to host both the panda family and the large number of new visitors the zoo expects. The decision for Calgary to host the pandas was supported and encouraged by the previous federal government in 2012, but no funds were provided,” the mayor writes.

Trudeau’s June 21 response thanks Nenshi for his “enthusiastic” letter and opens by telling the mayor that holding the pandas was a “once in a lifetime event” for the prime minister that “made me the envy of many, including my own children.”

But Trudeau rebuffed the funding request and suggested that the Calgary Zoo explore programs offered by the federal Western Economic Diversification agency. Trudeau said he forwarded Nenshi’s letter to Navdeep Bains, the minister in charge of that organization.

“The city of Calgary’s generosity of spirit, as most recently evidenced by welcoming Syrian refugees and those displaced from the Fort McMurray fires, leaves little doubt the giant pandas will be made to feel at home,” Trudeau writes.

Both letters were provided to The Canadian Press by Nenshi’s office, which declined to be interviewed.

Two giant pandas, Da Mao and Er Shun, were loaned to Canadian zoos for 10 years as part of a 2012 deal with China. Since 2013, the pair has been at the Toronto Zoo, where the cubs were born and later famously photographed in the arms of Trudeau.

The pandas and their progeny are to arrive at the Calgary Zoo in 2018 for a five-year stint. The exhibit is expected to prompt an influx of visitors and provide a much-needed economic boost, but the upfront outlay is sizable.

Calgary Zoo president Clement Lanthier said the “Pathway to Panda” project has a price tag of about $30 million. Renovations need to be made to the building where the creatures will live and expanded parking lots, washrooms and restaurants are required to accommodate more visitors.

Lanthier said it’s fantastic to see the mayor advocating on behalf of the zoo and it will look into what Western Economic Diversification can offer.

Calgary has committed about $8.2 million and the Alberta government is kicking in $10 million. Sponsorship deals, fundraising and the zoo’s capital reserve could make up the remainder, said Lanthier.

“I think fiscally we are very comfortable with our ability to deliver on this.”

In his letter, Nenshi said attendance at the zoo is expected to increase by 600,000 visitors a year to 1.8 million because of the pandas.

Lanthier estimates the pandas could mean an $18-million economic boost for Calgary annually.

Upgrades at the Toronto Zoo for the pandas were far less extensive.

About $3 million that was on the books to renovate a tiger exhibit was instead directed toward the pandas, said spokeswoman Jennifer Tracey. The spruced-up enclosure can be used for the tigers once the pandas leave and the big cats return.

The Toronto Zoo already gets some city funding for its capital budget and received $500,000 from the Ontario government for a panda interpretive centre. There was no federal contribution.

The city’s animal park is already large, so no other facilities needed to be expanded for increased visitors, said Tracey.

“We were fortunate in that we didn’t have to do any major upgrades aside from renovating the exhibit where the pandas would actually be.”