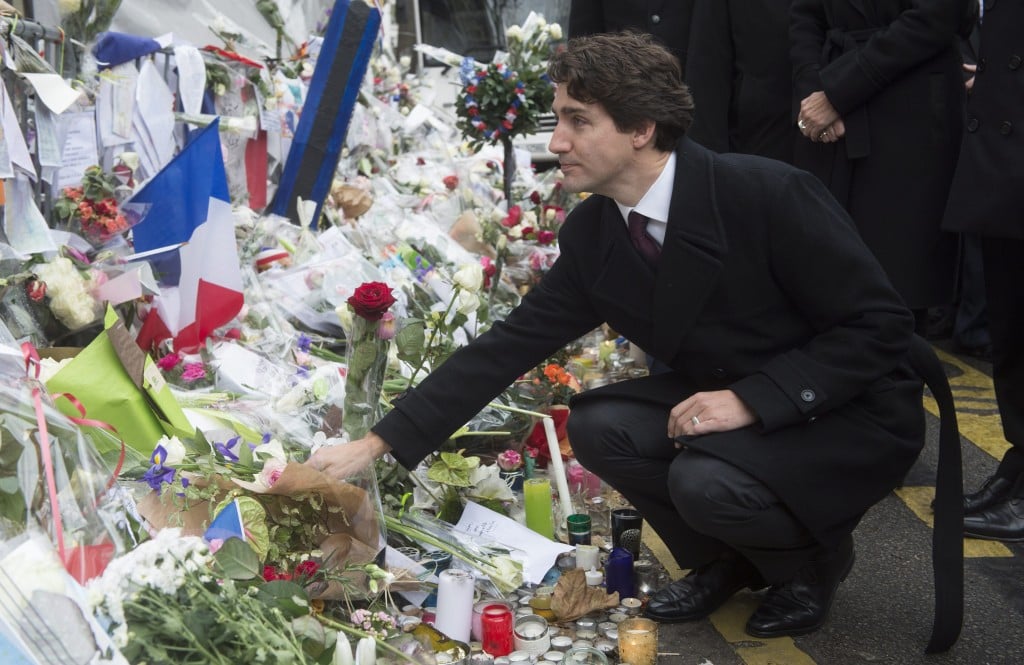 Canadian Prime Minister Justin Trudeau lays a flower at a memorial outside the Bataclan Cafe, in Paris, France, on Sunday, Nov. 29, 2015. (Adrian Wyld/CP)

PARIS – Prime Minister Justin Trudeau paid tribute this morning to victims of this month’s terrorist attacks in Paris with a visit to the Bataclan concert hall, the scene of the worst carnage on Nov. 13.

A Quebec delegation organized the memorial ceremony at the site where 90 of the 130 victims died when Islamic-inspired terrorists launched seven co-ordinated attacks around Paris.

Trudeau was accompanied by his wife Sophie Gregoire as well as Quebec Premier Philippe Couillard and Montreal Mayor Denis Coderre. French Prime Minister Manual Valls also joined them at the memorial where they honoured the victims in silent reflection.

The moving Quebec ballad ‘Quand les hommes vivront d’amour,’ written by Raymond Levesque, was performed at the ceremony by Veronic Dicaire, and youngsters from a Quebec school board laid flowers on the makeshift shrine in front of the cafe.

Related: Inside the horrifying scene in the Bataclan

Trudeau, speaking to reporters in the Elysee courtyard, called his visit to the Bataclan “extremely touching.”

“Canadians as a whole were extremely touched and affected deeply by the attacks, and it was an important opportunity to demonstrate that we stand firmly in sympathy and in resolve with the people of France — indeed with everyone around the world in the fight again terror and the work to create peace and stability across the world,” he said.

Premiers Kathleen Wynne of Ontario, Rachel Notley of Alberta, Christy Clark of B.C. and Saskatchewan’s Brad Wall are also in Paris for Monday’s formal start of the COP21 international climate negotiations, and will stop at the Bataclan to pay tribute later this afternoon.

Trudeau had a working lunch today at the Elysee Palace with French President Francois Hollande, who told a news conference that climate negotiations have already made progress over the past few months, “including thanks to Canada’s stance.”

The French president pointed specifically to climate financing — Trudeau announced a new, five-year $2.65 billion pledge this week — and also stressed the importance of setting a price on carbon emissions, which he noted the new Canadian government is adopting.

Trudeau’s scheduled meeting Saturday evening with India’s Prime Minister Narendra Modi was cancelled, but officials said the two may meet up Monday when the formal climate conference officially gets underway.

Trudeau said Saturday the shadow of the terrible terrorist attacks has actually made world leaders eager to show up in solidarity at the Paris climate talks, and that he was optimistic of a positive outcome despite the absence of credible emissions-cutting plans to stop global warming.c