Trudeau to wait and see on Trump's plan for Jerusalem embassy

Trump's recent nomination for ambassador to Israel vowed to work from 'the U.S. embassy in Israel's eternal capital, Jerusalem' 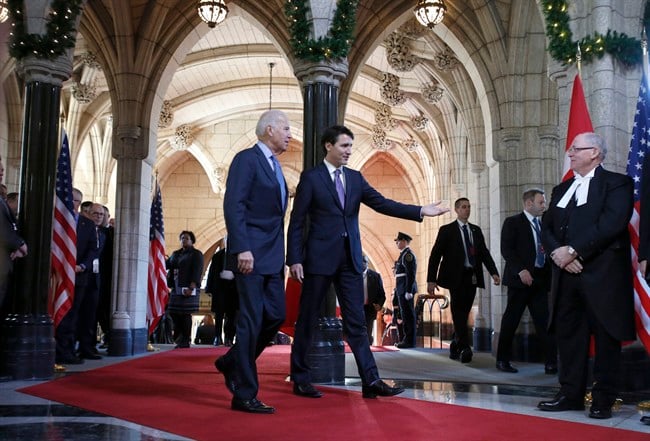 Prime Minister Justin Trudeau welcomes US Vice-President Joe Biden to Parliament Hill in Ottawa on Friday, December 9, 2016. The vice-president is scheduled to sit down later today with Canada’s premiers and territorial and aboriginal leaders, who are gathered in Ottawa for a day-long first ministers meeting to talk about climate change and health care. THE CANADIAN PRESS/ Patrick Doyle

MONTREAL – Prime Minister Justin Trudeau says he’ll wait to comment on the consequences of the United States moving its Israeli embassy to Jerusalem until president-elect Donald Trump makes good on his pledge to do so.

“There are a lot of things that are said during an election campaign, during transition time,” Trudeau told a news conference in Montreal on Friday. “In Canada, our government needs to respond to concrete actions and proposals and I’m not going to fall into the theoretical or the hypothetical.”

Like some of his predecessors, Trump has vowed to move the embassy to Jerusalem, a politically charged act that would anger Palestinians who want east Jerusalem as part of their sovereign territory.

Trump’s recent nomination for ambassador to Israel, right-wing lawyer David Friedman, said he would work from “the U.S. embassy in Israel’s eternal capital, Jerusalem,” even though the embassy is in Tel Aviv.

The statement sparked anger from liberal Jewish groups and such a move would distance the United States from most of the international community, including its closest allies in Western Europe and the Arab world.

Trudeau said Canada’s position is there should be a “two-state solution” between the Israelis and Palestinians “that is directly negotiated and embarked upon” by the two peoples.

“I hope that the new administration in the U.S. understands that creating a successful two-state solution means respecting and encouraging positive actions that bring people together,” Trudeau said.