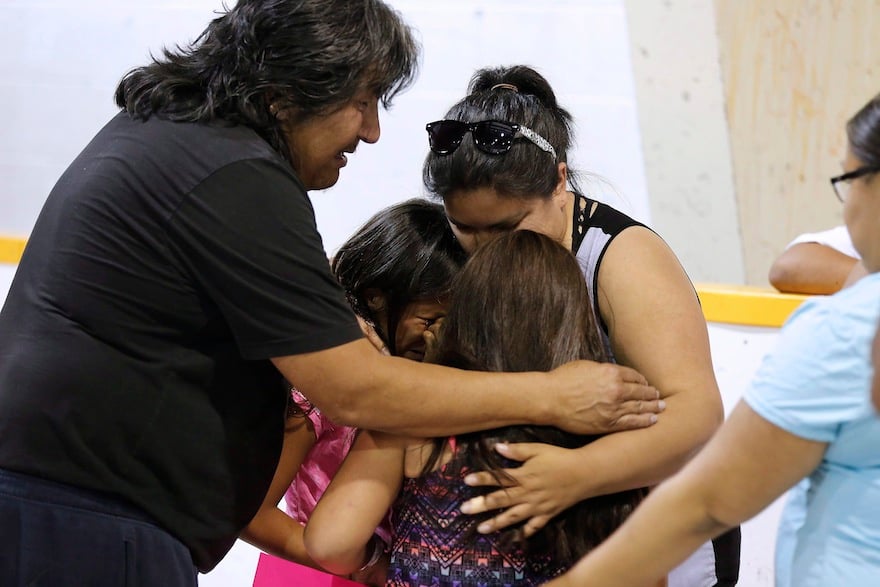 Liberal Leader Justin Trudeau says the federal government has “abandoned its responsibility” to a First Nation cut off from the outside world and living under one of the longest boil-water advisories in Canada.

Shoal Lake 40 First Nation, which straddles the Ontario-Manitoba boundary, was carved from the mainland to build an aqueduct to send fresh water to Winnipeg at the turn of the last century. It has no all-weather road and has been without clean water for 17 years.

Trudeau called the situation “inexcusable” in a statement Tuesday. If elected in the fall a Liberal government would fund the road project, he said.

“Shoal Lake 40 First Nation has been cut off from the rest of Canada, with inadequate access to the most basic necessities,” Trudeau said. “The situation requires an urgent response, yet for years the federal government has abandoned its responsibility to the First Nation.”

Both the City of Winnipeg and the Manitoba government have offered to share the cost of building a road, but Ottawa has refused to commit.

Reserve residents were left in tears last month when Natural Resources Minister Greg Rickford, the MP for the area, visited the band but refused to agree in principle to partially fund construction. Crowdfunding is underway now to raise Ottawa’s estimated share of $10 million to build the road.

Every year, people from the reserve risk their lives walking across through the ice trying to get to their front door. Many have died.

The aging ferry that residents rely on in the summer failed to pass government inspection in the spring, prompting the reserve to move elders out and declare a state of emergency.

The ferry has since been patched up but will need more extensive repairs to function next year.

“The current unreliable, expensive and often dangerous access to Shoal Lake 40 cannot be allowed to continue,” Trudeau said. “It’s time to ensure permanent, year-round access by road to the community.”

NDP Leader Thomas Mulcair declined an interview request but mentioned the reserve in a speech Tuesday to the Assembly of First Nations in Montreal. He suggested an NDP government would also fund construction of an all-weather road.

“It’s time we had … a prime minister who comes to the table when provinces and communities set their priorities, as in the case of Shoal Lake 40,” Mulcair told the assembly. “The federal government needs to show leadership.”

All three levels of government have chipped in $1 million each for a design study.

A spokeswoman for Aboriginal Affairs Minister Bernard Valcourt said he wasn’t available for an interview. Emily Hillstrom said in an email that a “decision on funding the road itself will be made when that design study is completed.”

But Chief Erwin Redsky of Shoal Lake 40 said a design study is no guarantee the road — Freedom Road as it’s known — will be built. An all-weather road would allow the reserve to tap into economic development and, eventually, build a water-treatment plant.

Shoal Lake 40 residents should not have to risk their lives to get groceries or pick up their mail, Redsky said.