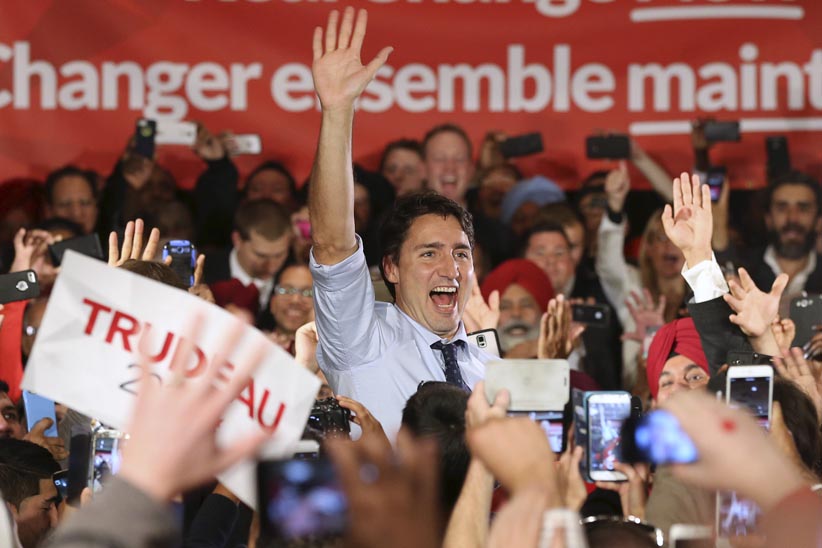 Liberal leader Justin Trudeau waves during a campaign rally in Calgary, Alberta, October 18, 2015. Canadians will go to the polls in a federal election on October 19. (Chris Wattie/Reuters)

“People get into this infantile discussion: ‘Is Justin Trudeau more like his father? Is he more like his mother?’ ” says Liberal operative Bruce Young. To Liberal old-timers in B.C., the question is moot. To them, there is one person Trudeau resembles: His grandfather, the late Jimmy Sinclair, a long-time Liberal MP and fisheries minister from Vancouver’s North Shore. A man who, by the way, was a high school teacher long before he became a politician.

“His grandfather was a tough-nosed, old-school Scottish-Canadian political operative. He organized block-by-block, street-by-street. He loved getting out, shaking hands, going door-to-door, sitting down at kitchen tables. That was his grandfather,” says Young.

And that neatly sums up the skill set of his grandson, a politician who is most adept at precisely the type of thing that made his father, not to mention the party’s wonkish previous two chiefs (Stéphane Dion and Michael Ignatieff) shudder.

“His father, for all his charms, was handed the safest seat in the country, in Mount Royal,” says Young. “For the first time in the history of the party we have a leader who had to really scramble to win the nomination for his seat, in Montreal’s Papineau riding. He’s demonstrated an unbelievable capacity for grassroots mobilization, street organizing and field campaigning. It’s imbued the party with a strategic sense of its value, and that’s created an internal competitiveness among riding associations.” To Young, “people don’t just wake up and become naturally attuned to political organizing. It really is in his blood.”

Jimmy’s name still looms large in Vancouver, where the Sinclair Centre, a high-end Hastings Street shopping mall bears his name. And it was no accident that Trudeau chose to close out his campaign in Jimmy’s old riding of North Vancouver on Sunday night, after rallies in Alberta and before catching a red-eye to Montreal for election day.

The final day was as symbolic as it was aggressive, spent in provinces where Liberals have had no hope of breaking through, in some cases for decades.

“Let’s settle something once and for all: Are there any Liberals in Calgary?,” Trudeau shouted in a voice so ragged and hoarse it sounded like he hadn’t slept in five or six provinces. He was addressing a crowd of some 4,000 inside the northeast Calgary Banquet Hall, a location chosen for its proximity to the airport. “Thank you for showing that Calgary is filled with people engaged in positive politics with a strong vision for the future.”

It was packed inside, and hundreds more were gathered outside, mobbing Trudeau as he entered the building. (By the end, he was sweating so much that he changed dress shirts to scrum with media after.) It was more than what Harper drew at his lone campaign event in his hometown.

Harper and Mulcair only held Calgary events this campaign the day before they had to be here anyway, for the Globe and Mail economy debate. This was Trudeau’s third stop in Calgary—once on its second day, once for the Globe debate and then on what will be remembered as either his bold victory lap or his misguided, hubristic, endgame.

In Western Canada, the Liberals are suddenly competitive in no-hope ridings where they haven’t registered in years, places like Calgary Centre, which has never voted anything but for a right-wing party. They’re gunning for some of the NDP’s safest Western seats, including Winnipeg North and Churchill–Keewatinook Aski, a union-friendly northern riding that has voted orange all but twice in the past 35 years. In B.C., the party believes it might even steal South Surrey–White Rock from popular former mayor Dianne Watts, a former Reform-Canadian Alliance stronghold where the Liberals came a distant third in 2011, with barely 17 per cent of the vote.

And Trudeau is perhaps the first Liberal leader in memory whose travel patterns depict the West not as a lost cause or a liability, but as an opportunity. He also sees his surname as something that can no longer keep his party down in a part of the country that has become a Conservative fortress under Stephen Harper.

“I said it on the first stop of my leadership campaign. I said it on the first stop of this election campaign. And I’m here to say it again the last day before we vote. This place matters!” he told the assembled crowd in Calgary. “And it’s a message that I’m proud to deliver here, with a big smile—as a Liberal, as a Trudeau and as a Quebecer.” Myth has it that those three factors are political poison in this part of the country. But on an Oct. 18 five years ago, a new mythmaker arose in Calgary: Naheed Nenshi came from way behind to become mayor.

A Nenshi-like swoon is a tall order for a party with just four seats west of Ontario—one each in Manitoba and Saskatchewan and two in B.C. But Trudeau seems determined to build the party  in the way of his grandfather: on the doorstep, from the ground up.