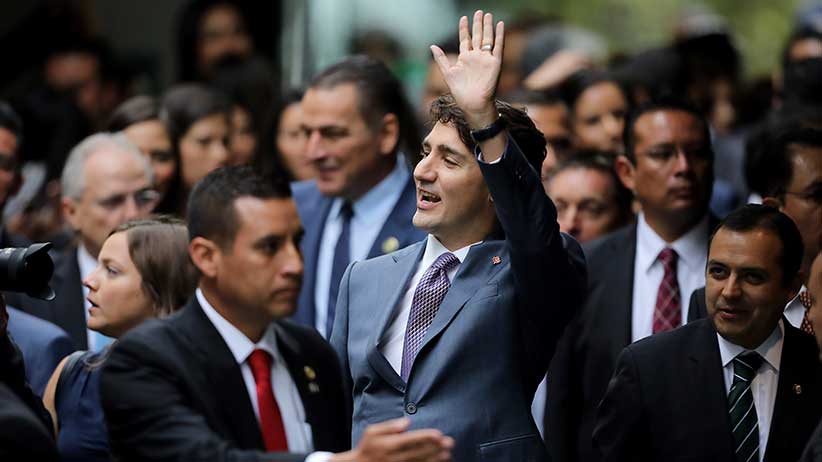 DANANG, Vietnam – In the wake of a court challenge against a controversial Quebec law banning people from wearing face coverings while giving or receiving public services, Prime Minister Justin Trudeau says the federal government is actively studying ways in which it might also weigh in.

Trudeau’s remarks on Quebec’s Bill 62 are the strongest indication he’s given yet about the federal government’s position on the law, which has been widely panned across the country for perceived discrimination against Muslim women.

Two groups filed a lawsuit in the province this week claiming the bill is unconstitutional and discriminates against an already marginalized population.

The Quebec government has defended the law on the grounds that it is in line with the Charter of Rights and Freedoms and ensures security for all.

Speaking in Vietnam, Trudeau offered his first remarks on the bill since the court challenge was launched.

OPINION: Why Quebec’s Bill 62 is an indefensible mess

He says the government is mulling ways in which it could potentially take action against the legislation.

“We’re looking at Bill 62 carefully, we’re listening to the questions being asked about it and we’re in the process of studying, internally, the different processes we could initiate or with whom we could join,” Trudeau said. “But we will continue to reflect and to work on it.”

He also reiterated his commitment to upholding the Charter of Rights and Freedoms as well as concerns about the appropriateness of legislating women’s apparel.

“I think I’ve been very clear that I don’t think a government should be legislating what a woman should or shouldn’t be wearing. I don’t think that’s something that is right for Canada,” he said. “I will always defend the Charter of Rights and Freedoms and as for next steps, we’re watching the situation as it unfolds and reflecting on what those steps might or could be.”

Trudeau had initially stayed mum on the bill when it was first passed last month, saying efforts to fight it should come from citizens rather than higher orders of government.

But days later, as the Quebec government attempted to clear up confusion around how the bill would be applied, Trudeau opened the door to stronger federal action by saying he would “stand up for individual rights” and saying Ottawa was looking at what tools it has at its disposal.

Options include waiting for an individual to challenge the constitutionality of the law and then intervene in the court case. The government could also pre-empt a lengthy legal battle by referring the law to the Supreme Court for advice on its constitutionality, or help finance a procedure through the court challenges program, which Trudeau reinstated to help fund individuals or groups who initiate cases involving charter rights and freedoms.

Earlier this week, the National Conucnil of Canadian Muslims and the Canadian Civil Liberties Association filed a challenge against Bill 62 in Quebec Superior court.

The court challenge states that the face-veil law “gravely infringes” the religious and equality rights of certain Muslim women in the province.

The court challenge takes direct aim at the section of the law that forces public sector employees and private citizens to have their face uncovered when giving or receiving public services. The ban extends to attending class in one of Quebec’s public educational institutions or boarding a public transit vehicle in the province, though the law states people are free to don face coverings again once they have shown identification.

Ihsaan Gardee, executive-director of the National Council of Canadian Muslims, has said the law is clearly aimed at Muslim women who wear a face veil.

“Our legal challenge targets the heart of what this law really is: a discriminatory, unconstitutional and unnecessary piece of legislation that excludes and stigmatizes an already marginalized and vulnerable minority of women and, by extension, the larger Quebec Muslim community,” he said.

Premier Philippe Couillard has commented on the challenge by saying, “We deliberately wrote a bill that respects the charters and we’re very comfortable with that.”

—With files by Michelle McQuigge in Toronto