Trudeaumania with a mean streak

At a packed rally of red clad fans, the Liberal leader and Kathleen Wynne teed off on Harper 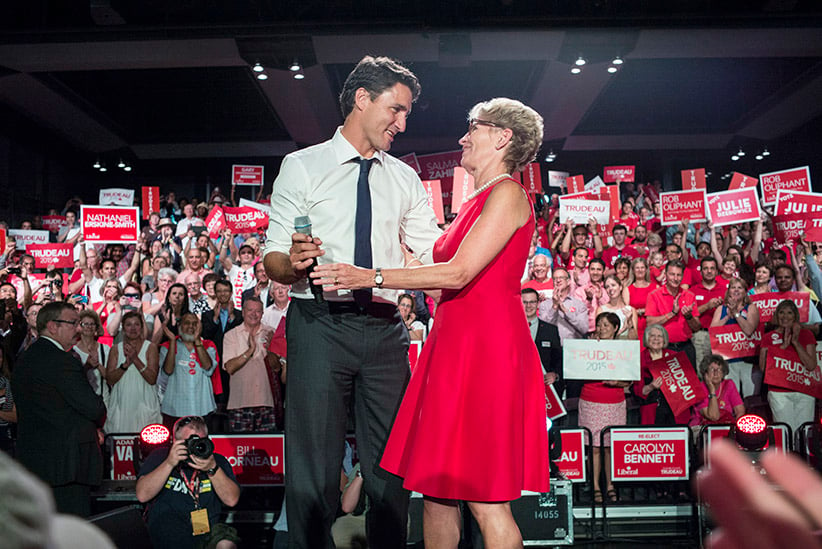 If you think the Liberals share much in common with the NDP, a red-clad campaigner will have you know they’re different. But at last night’s Liberal rally in downtown Toronto—held in the same theatre as Thomas Mulcair’s book launch last Monday—Justin Trudeau and Ontario Premier Kathleen Wynne had the Conservatives squarely in their sights, not the other party ahead of them in the polls.

Wynne, who has become Trudeau’s loudest political endorser, led the way to the stage as they zigzagged through the aisle of applauding people like a two-person conga line.

She outlined the absurdity of Stephen Harper’s roadblocks to her pension-reform plans, segueing to the conclusion that Trudeau will work with the provinces and territories, not against them.

Her speech went on—too long, according to one grumbler in the crowd who later compared her to the chatterbox of Lisa Simpson.

“And what about Mulcair?” Wynne eventually asked. “He’s all over the map. His ideas are either incomplete, or they’re unworkable, or they are impossible.” No further details followed.

The crowd was a vortex of red, wearing Liberal pins like poppies and swaying red signs like flags. There were red turbans, red shoes. The bathroom was red and, based on the rest of the colour scheme, you could not be sure if that was coincidence. Baby clothes were branded with Trudeau’s name, and a few kids were chanting their support, even if they were in it for the stickers.

Just as clearly as the support was red, the audience’s attacks were blatantly blue. A bicycle parked outside was plated with an authentic stop sign, complete with the word “Harper.” A couple with a banner, protesting Conservative plans for pipelines, held it at their chests until their biceps trembled. There was nothing against the NDP.

When Trudeau took the microphone for the keynote address—here in a province so important to the Liberals’ hopes of forming a government—his ammo was aimed in the same direction.

“If the Prime Minister had been doing his job over the past 10 years to secure Canadians’ retirement, to work with the province to make sure that Canadians actually have a safe, secure retirement, well then, Kathleen wouldn’t have to be doing his job on top of her job at the same time.”

He attacked the Conservative attack ads: “Let me tell you, my friends, not only am I ‘ready’ for this election, but I’m determined to win it. The fact that I can stand up here and credibly say the Liberal Party of Canada will win this election is not just because of me and my great hair.” The subsequent cheers had one man in the bleachers fully bouncing up and down. “Harper has spent millions and millions of dollars trying to tear us down. We’re going to prove to Stephen Harper that all the money in the world can’t stop change when Canadians want change!”

Trudeau reminded listeners that Harper believes in trickle-down economics, while Liberals focus on the people behind the economy.

Then, for a moment, he mentioned that Mulcair also does nothing to raise taxes for the upper class. “For the life of me, I can’t figure out why,” he said. “Maybe it’s because he’s afraid of Conservative attack ads.” And, just like that, the rage returned to Harper.