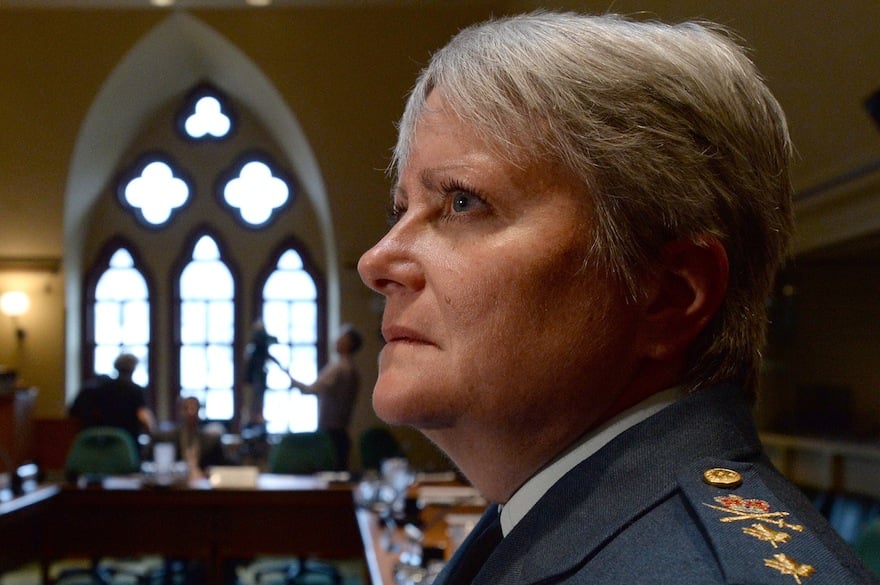 Maj.-Gen Christine Whitecross attends a committee on the external review into sexual misconduct and sexual harassment in the Canadian Armed Forces, in Ottawa on Monday, May 25, 2015. THE CANADIAN PRESS/Sean Kilpatrick

Maj. Gen. Christine Whitecross spoke to our politics podcast, Maclean’s On The Hill, when the report in question came out. Listen to that interview here, at the 1:16 mark.

OTTAWA – There is no consensus about the extent to which sexual misconduct and harassment are occurring among Canada’s soldiers, says the commander in charge of the military’s response to a scathing report on the problem.

Maj. Gen. Christine Whitecross, who is spearheading the Canadian Forces effort to address the situation, said Monday there’s no agreement among leaders, despite the report’s harsh depiction of the military’s highly sexualized culture.

“While there is a collective will to move the organization forward, there is little consensus as to the gravity of the existing problem,” Whitecross told a House of Commons committee.

In her report released earlier this month, former Supreme Court justice Marie Deschamps documented a sexualized culture so pervasive that soldiers eventually become desensitized, while victims encountered a chain of command that seemed to turn a blind eye to real problems within its ranks.

Whitecross has held 16 briefing sessions on half a dozen Canadian Forces bases so far. Commanders are committed to action, she said.

“They all want to be engaged in setting the conditions for a better trust in the chain of command … that, fundamentally, is the biggest thing we’re hearing.”

The military had sought to defuse the bombshell of Deschamps’s work by presenting its plan to address her 10 recommendations at the same time the report was released.

They only agreed with two of her recommendations outright, committing to the rest only in principle — including that there be an independent centre to handle sexual abuse and misconduct claims.

Last week, Deschamps told the committee that the centre is only one prong of the approach.

“The centre is one of the elements of the puzzle of the whole strategy to reinstate the confidence in the organization because the victims will know that if they seek support they will not suffer any negative consequences,” she said.

“But the change of the culture requires much more than the centre.”

In the aftermath of the report’s release, there had been suggestions the military wasn’t taking the idea seriously, with senior leadership saying only they would study it.

Defence Minister Jason Kenney, however, has insisted in the House of Commons that all 10 of the report’s recommendations would be implemented.

He has also promised a victims’ bill of rights for the Canadian Forces which would, among other things, strengthen the procedural rights of victims of sexual aggression.

Whitecross said there’s been no final decision on whether a centre would be created, but told the committee she’s already met with U.S. and Australian military officials, who have such offices set up and will also speak with French authorities.

“I like the victim support-centric approach that they both have, because fundamentally they are looking at the needs of the victims first and foremost.”

Whitecross has committed to published a report by this fall updating the public on the status of the military’s response to the Deschamps report.