Truth and reconciliation, one step at a time 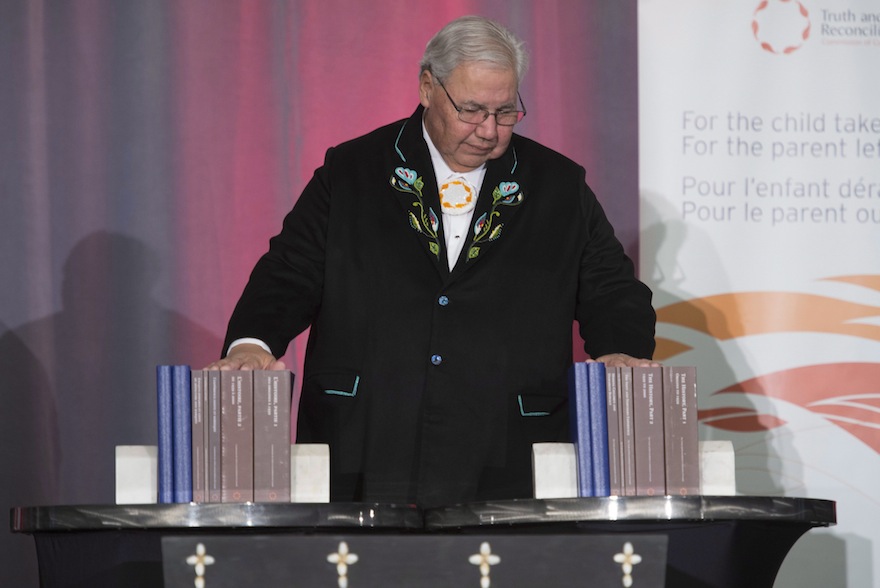 Commissioner Justice Murray Sinclair pauses and places his hands on the final report of the Truth and Reconciliation commission following its unveiling, Tuesday December 15, 2015 in Ottawa. (Adrian Wyld/CP)

The truth was officially delivered to Prime Minister Justin Trudeau—25 lb. of it in nine volumes recounting the attempted destruction of a culture—in an unremarkable conference room across the Rideau Canal from Parliament Hill. Residential school survivors and their family members, elders, and others marked the end of the six-year Truth and Reconciliation Commission process with a ceremony staffed by support workers in yellow vests, there for anyone whose memories were too much to bear.

After the commissioners and political leaders were smudged with sweet grass, a sacred plant used for purification and healing, local elders welcomed the gathering, and Justice Murray Sinclair was introduced. The crowd met him with a standing ovation and full-throated cheers. Sinclair spoke of the survivors, their children and grandchildren, the pain and horror and despair they endured. He thanked his family for their own sacrifice to let him lead the commission for so many years. “They have supported me in this work, but at great loss to the relationships we could have had. And which we will now try to recapture.” Sinclair paused, struggling to regain his composure, and the audience clapped until he was ready to continue. “They have all been concerned about my welfare as I went through this work because they know that in the area of my own health and well-being, I am a reckless fool. I promise them I will stop.”

Eugene Arcand represented some of the survivors. He spent 10 years in a residential school in Saskatchewan and advised the TRC throughout its work. He wore hawk feathers attached to his cap, given to him by his son, something he wouldn’t have been able to do at the residential school. Arcand joked about which TRC adviser was bossiest and drew laughs when he teased Sinclair about wanting to reprimand him. Then he grew serious. The TRC had survivors revisit their childhoods. “We shared our tears, we shared our laughs, but we dug deep inside and we dug out the demons,” Arcand said, his voice breaking.

He was far from the only person to give in to his emotions. Trudeau teared up several times, notably when commissioner Marie Wilson noted their work was completed without former prime minister Stephen Harper ever attending a TRC event. “Today will mark the first time we hear an official response to our work from the Prime Minister of Canada on behalf of the people of Canada,” Wilson said.

The simple fact Trudeau was there drew a standing ovation. He got two more during his speech for promising a new relationship and for calling an inquiry into missing and murdered Indigenous women. “No relationship is more important to me and to Canada than the one with First Nations, the Metis nation and Inuit peoples,” Trudeau said. “I give you my word that we will renew and respect that relationship.”

The Prime Minister sat facing two empty chairs that signified the children who died at residential schools, or in trying to escape them. (The TRC believes that’s about 3,200 people, but the records are poor or non-existent, so it’s likely we’ll never know for sure.) Trudeau referred to the 2008 official apology for residential schools, offered by Harper and celebrated with a special session of Parliament. He didn’t mention the part where the Conservative government went on to make the TRC’s work harder. He talked of the time a good teacher at one of the good schools he attended hit the part in the textbook on Indigenous Canadians, and told the class that chapter wasn’t very interesting or important. So they skipped it.

So many people felt ignored for so long, and many have now been heard. The commission was created as part of an out-of-court settlement after residential school survivors launched a court case. But several groups were excluded: the Metis, who weren’t covered by the original settlement agreement; the Indigenous people of Newfoundland and Labrador; those who attended provincial schools; and those who went to day schools rather than boarding schools.

Related: An important step in stopping a national tragedy

“Achieving reconciliation is like climbing a mountain—we must proceed a step at a time,” Sinclair said. “It will not always be easy. There will be storms, there will be obstacles, but we cannot allow ourselves to be daunted by the task because our goal is just and it is also necessary for our children.”

The survivors have delivered their truth. Reconciliation will be another matter.