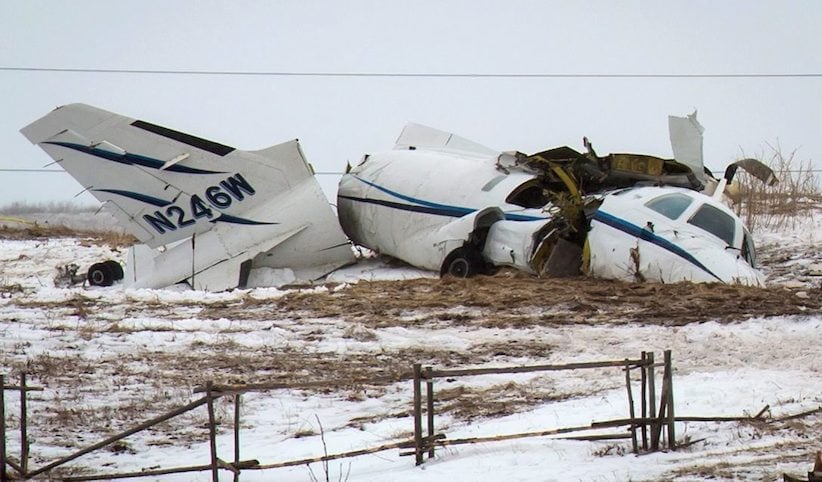 The wreckage sits in a field in Havre-aux-Maison, Quebec. (David Noel/The Canadian Press via AP)

ILES-DE-LA-MADELEINE, Que. — The plane crash that killed ex-cabinet minister Jean Lapierre and six other people appears to be an “approach-and-landing accident,” the Transportation Safety Board of Canada said Wednesday.

Investigator Mike Cunningham said his six-member team has begun collecting as much evidence as possible from the crash site in a field near the airport in Havre-aux-Maisons in the Iles-de-la-Madeleine.

Lapierre, his wife, three of his siblings and both crew members died Tuesday when their chartered plane crashed on its landing approach about three kilometres from the airport. There were no survivors.

Cunningham said the so-called approach-and-landing phase of flight is of particular concern to the safety board and to similar investigative agencies around the world.

“There are quite a few accidents that occur in the approach-and-landing phase and we’ll be looking in detail at that,” he told reporters.

Cunningham said his team will likely grow in numbers and that Quebec provincial police and the Canadian Coast Guard, which is conducting aerial photography of the crash site, are helping.

“The big part of the investigation right now is all about data collection,” he said. “Basically, we don’t leave any stone unturned. We collect all the information we need to analyze any possible scenario that may have contributed to the cause of the accident.”

He added that once the plane wreckage has been documented on-site, the whole aircraft will be transported to the safety board’s engineering office in Ottawa for analysis and testing.

The safety board said the aircraft was not equipped with, nor was it required to carry, a cockpit voice recorder or a flight data recorder.

“However, the team will be reviewing any electronic components on the aircraft from which they can retrieve data to help understand the flight profile,” a statement said.

Provincial police spokeswoman Martine Asselin said officers have spoken with about 10 people, mostly witnesses to the crash but also members of the victims’ families.

The family of Pascal Gosselin, the plane’s pilot, said in a statement it would fully co-operate with investigators.

“The family is devastated,” the release said. “We cannot explain the inexplicable. At this time, we are all hoping for answers that, unfortunately, will not come today.”