Social media reacts to our story on social malaise in Quebec 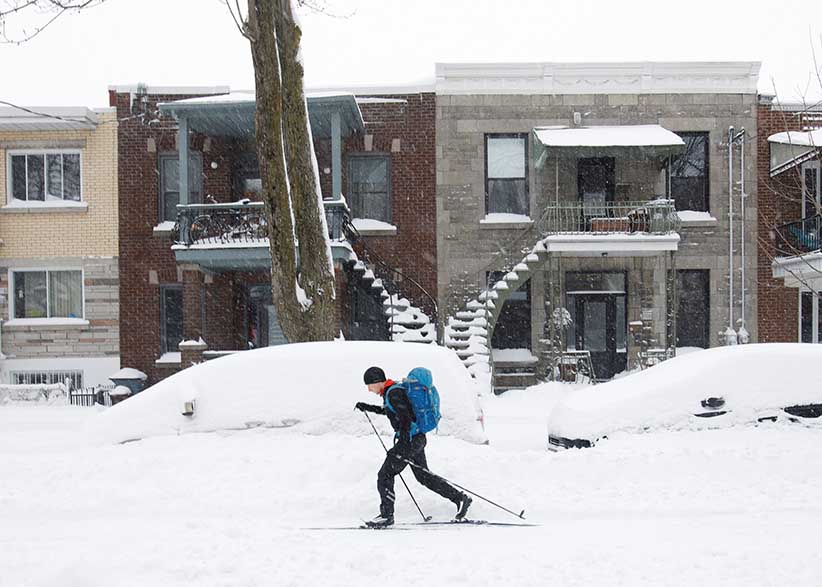 A man cross-country skis past cars buried in snow as a late winter storm that dumped more than two feet (60 cm) of snow in certain areas of Quebec, closed schools and some roadways causing multiple highway collisions and incidents of trapped motorists, in Montreal, Quebec, Canada March 15, 2017. (Dario Ayala/Reuters)

While a snowstorm barrelled through Montreal earlier this month, 300 cars were stranded on a major highway. Some people spent the entire night in their cars, running out of gas, with no help in sight. This chaos that ensued is being called a political scandal, and as Andrew Potter, the Director of the McGill Institute for the Study of Canada wrote this week, the incident revealed the “essential malaise eating away at the foundations of Quebec society.”

Potter’s commentary on Quebec’s “mass breakdown in social order” garnered some less-than-pleased reactions from readers. Some even labelled the piece “fake news.” In the meantime, Potter corrected some aspects of his piece (read his note here.) Here’s what you had to say:

Uh oh. Something tells me M. Potter’s going to be the subject of a unanimous resolution of the National Assembly… https://t.co/wEzhG09l7I

Beware of any article that makes sweeping generalizations without citing any evidence to back up its conclusions https://t.co/TAKKkNeZMo

Potter’s piece is a study in how apparently, white dudes can write total bullshit and not fear that they’ll not be taken seriously.

So, a bad traffic jam exposed how Quebecers are all selfish nihilists? https://t.co/GrTMJQkgD0

There’s a lot going on in this piece on social order in Quebec but he’s not wrong on the death of solidarity… https://t.co/gAb0s4LRS1

https://t.co/9kt9Nrh5rv Fact overlooked by this piece of garbage? Québec has been runned by the corrupt QLP for 15 years. Like the result?

Here we have an example of the Angry Anglo in his natural surroundings, deep in pile of equine droppings. https://t.co/egZaIoQcPN

We live in a country where it's cool to debate merits of a single religion on near-constant basis, but god help you if you criticize Quebec

This is the stupidest article I’ve read today. Mind you, it’s early. https://t.co/wlW1lEwpQM

Hey @MacleansMag, can you guys tell @jandrewpotter that we try to AVOID fake news ? 2 bills at the doctor. Really?!? https://t.co/9nt53pKkcP

OUCH , Andrew Potter NAILS IT , LIVED THERE DONE THAT AND SO GLAD I LEFT in 1998 folks a really really good… https://t.co/zFReoctvXa

If the French media catches wind of this, it’s gonna hit the fan https://t.co/D3b63iQRdm

@MacleansMag Macleans at it again with the Quebec bashing. I liked the logical magic tricks that turned 50$ atm’s into social alienation!

@MacleansMag poorly researched article. Unless it was in the fiction section, then kudos on the Orwellian spin!

It seems things have deteriorated considerably in the 15 years I have been away.

Truly saddening to read this. https://t.co/iFqg1Dc4Ro

Since this story was published, McGill University tweeted that it was distancing itself from the views expressed. Emmett Macfarlane—a University of Waterloo political science professor and occasional Maclean’s contributor—slammed the university for the “chilling effect” of the tweet.

Absolutely embarrassing for a university to state this. Do you distance yourself from all McGill-affiliated writers? https://t.co/aCPDHU1Wzk