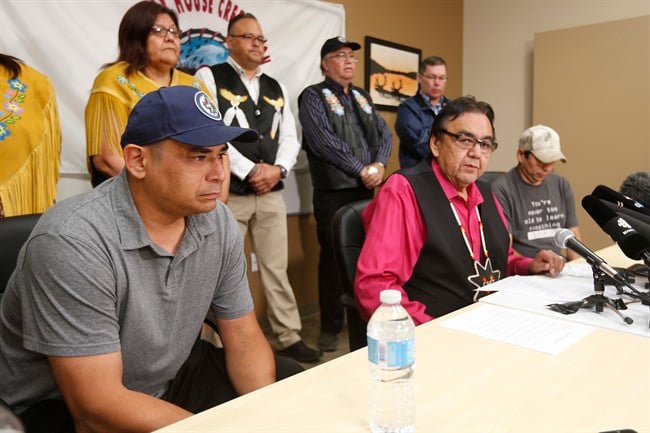 Manitoba’s former aboriginal affairs minister Eric Robinson, centre, with Norway House residents Leon Swanson, left, and David Tait Jr. announces at a press conference in Winnipeg on Friday, August 26, 2016 that the two men were switched at birth in 1975 when their mothers gave birth at Norway House Indian Hospital. A recent DNA test revealed that the two men from Norway House Cree Nation in northern Manitoba were likely raised by each other’s families. This is the second time such an incident occurred in 1975. (John Woods/CP)

WINNIPEG – For years, people in the tiny northern Manitoba community of Norway House Cree Nation gossiped and whispered about why David Tait Jr. and Leon Swanson didn’t look much like their parents.

Now, the two men — born just days apart in the same remote community’s hospital — are devastated after learning that they’ve called the wrong people their family for decades after apparently being switched at birth.

It’s the second such case at the same federally run hospital to emerge in less than a year.

“Forty years gone,” he said after long pauses, barely able to speak through his tears.

“It’s pretty tough. It hit me like a ton of bricks. If anything (I’m) angry, confused, upset. I’d like to get some answers on what’s going on.”

DNA evidence has confirmed that Tait Jr., 41, is the son of Charlotte Mason — the woman who raised Swanson as her son — and not Frances Tait.

Further DNA tests are expected to show that Swanson, Tait Jr.’s life-long friend, is the biological son of Frances Tait, the men said.

Tait Jr. was born three days after Swanson in the winter of 1975 at the federally run Norway House Indian Hospital.

Last November, two men from nearby Garden Hill First Nation, Luke Monias and Norman Barkman, discovered through DNA tests they were switched at birth at the same hospital in the same year.

“We can live with one mistake, but two mistakes of a similar nature is not acceptable,” said Robinson, who has been working with the families. “We can’t slough it off as being a mistake. It was a criminal act.”

Robinson demanded the federal government launch an independent investigation into what happened and provide dedicated counselling for the families. He also wants Health Minister Jane Philpott to meet with the relatives of all four men to hear first-hand how they have been affected by the discovery.

“It’s something (the government) can’t sweep under the carpet. There are lingering questions out there,” said Robinson, who was born at the same hospital.

Philpott called the circumstances appalling and said Ottawa is taking steps to set up a third-party investigation.

“It’s impossible to describe how tragic this situation is, obviously, for the two gentlemen in question, but (also) for their families, for the entire community,” she said from Saguenay, Que., where she was attending a Liberal caucus meeting.

“We have reached out to the gentlemen to make sure that they have the appropriate mental-health resources … to deal with this very unfortunate circumstance,” she said.

“It’s fundamentally important that we understand how this could have happened at the time.”

Health Canada called the mix-ups “unfortunate incidents” and promised counselling and other support to the affected families.

The Norway House hospital no longer does elective deliveries and conducts emergency births about once every two months. Babies born there today are immediately given identification wristbands as is modern practice.

David Tait Sr., 63, said his wife was given what she thought was her own baby when she left the hospital in 1975. The couple had no questions, he said, until later, when his son started to “look different.”

“But who am I to say that he’s not mine?” Tait Sr. said of his mindset at the time.

The families have talked since they discovered the switch and are going to be one large family, he added.

“We’ve been family from the beginning,” agreed Tait Jr. “Just didn’t know it ’til now.”