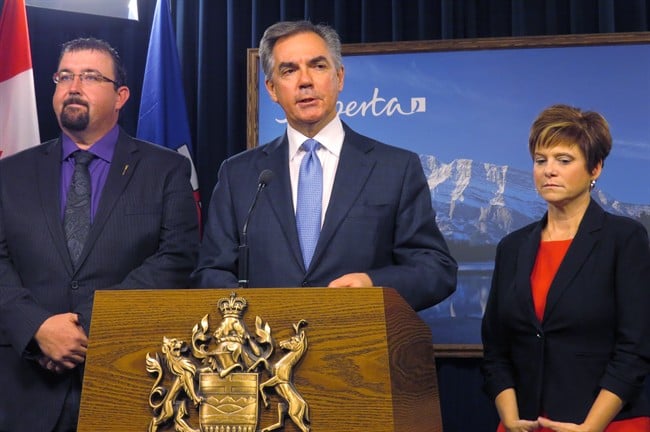 EDMONTON – Two members of Alberta’s Wildrose party are crossing the floor to sit with the governing Progressive Conservatives.

Both Towle and Donovan cited recent turmoil within the Wildrose as a reason for leaving.

Towle, who had served as critic for human services and seniors, said the Wildrose is a party of free votes, but she felt she was increasingly being told how to vote by the party membership.

“It was incredibly difficult,” Towle said of her decision.

“I just felt that some of the decisions that were being made were taking our party in a way that was not in line with what my constituents elected me to do and that would cause me great concern,” she added. “I didn’t think I could do anything to fix that path.”

Donovan, who had been the party’s agriculture critic, said he had a problem with party leader Danielle Smith saying she would resign her leadership if she didn’t win the next election.

“It’s hard to follow someone that says they are not sure they are going to lead the team if they don’t win the next game,” Donovan said.

“For my constituents, I think I can do the best from the inside making decisions around the table with the governing party and leadership of Premier Prentice.”

Prentice said neither Towle nor Donovan was offered anything for the move.

“I am pleased and humbled by this,” he said. “I’ve admired the work ethic and the integrity of both of these individuals.”

The Wildrose has been on the ropes after party members voted earlier against adopting as policy a statement supported by Smith that affirmed the rights of everyone, regardless of race, religion, sexual orientation or other differences.

Instead, members voted to go with a broader policy to recognize that all Albertans have equal rights, privileges and responsibilities.

The move was the culmination of an annual meeting that saw Smith promise to resign her leadership if she was not successful in the next general election, scheduled for 2016.

After the vote, Calgary riding executive Terrence Lo quit, saying the party is controlled by a powerful minority who is “LGBT unfriendly” and “ethnic unfriendly.”

Earlier Monday, Smith said her caucus announced that they had endorsed a resolution that specifically says it will respect the rights of gays and all other minority groups, despite the vote of the party membership at the annual meeting.